To celebrate the 50th anniversary of the Moon landing, National Geographic has plans for an entire Space Week of programming, kicking off Sunday night with the premiere of a new documentary called “Apollo: Missions to the Moon.”

It’s a story that’s been told many times, including in last year’s Neil Armstrong biopic “First Man.” And of course, there’s a whole slate of new documentaries and specials airing in the next few weeks — something that “Apollo: Missions to the Moon” director Tom Jennings acknowledged with a rueful laugh when we spoke on the phone.

But Jennings brought his distinctive approach to the project, one that he’s employed in previous documentaries like “Challenger Disaster: Lost Tapes” and “Diana: In Her Own Words.” The idea is to rely entirely on archival audio, video and photos, so that viewers can experience the story in the present tense, rather than hearing about it from talking heads 50 years later.

In this case, National Geographic says the film draws on 800 hours of audio, 500 hours of film and more than 10,000 photos. That includes previously unheard audio from Mission Control.

“In documentaries in the past, whether it’s the Moon landing or any of the Apollo missions, when you would hear audio in Mission Control, it’s a single line open line — that was the guy called CAPCOM,” Jennings said. “[But] there were hundreds of people there, and many of them are wearing headsets.” 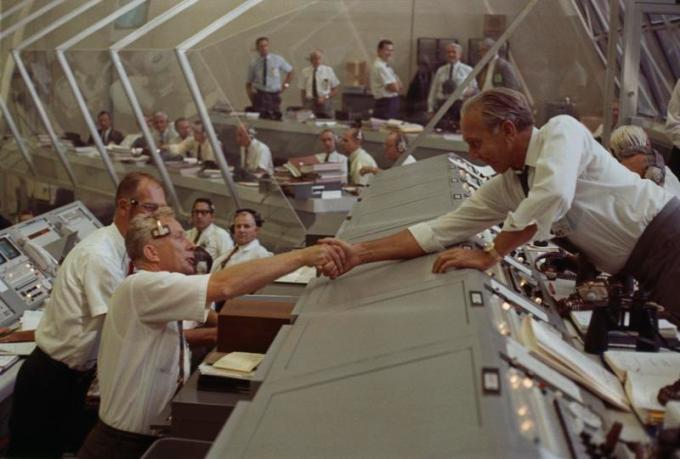 Flurry of handshakes erupts after successful launch of Apollo 11 (NASA)

So by incorporating this new audio, the film can give a fuller picture of what was happening in Mission Control, and how the Earth-bound team was responding to events in space.

Also worth emphasizing: The film tells the story of the whole Apollo program, not just Apollo 11. It spends more time on some missions than others, but the idea is to give viewers the full context of how we got to the Moon, and what happened after.

One of the big elements in the story is the breathless way the media followed the initial missions. (“The media was a character.”) After all, Apollo 7 featured the first live television broadcast from a crewed space mission, and one of the most striking scenes shows how people around the world were watching Apollo 11.

“How much the world stopped was unprecedented,” Jennings said. “I don’t think that it’ll ever happen again.” 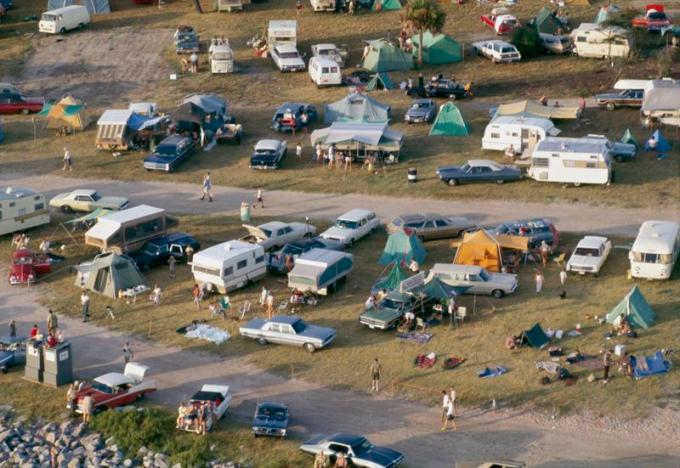 Indeed, you can see that in the film itself, as public interest in the program begins to wane after the Moon landing. Jennings speculated, “It was about the quest. Once that quest was completed, it was like: Now what?”

In fact, he said some of the footage cut from the film made that point as well, with “NASA spokespeople wandering around the press room after 11, before 13 got into trouble, basically saying, ‘For Apollo 11 this place was standing-room only, and now it’s just vacant.'”

And while the film doesn’t skimp on the triumph of Apollo 11, by tracing the full arc of the program, it ends on a melancholy note, as Apollo ends and NASA officials predict correctly that we won’t return to the Moon in their lifetimes. “Apollo: Missions to the Moon” doesn’t directly address what’s happened in more recent decades, but you can’t help but see an implicit critique of NASA’s scaled-back ambitions.

“I felt like we needed the film to properly acknowledge what we’ve lost,” Jennings said. He recalled talking to Frances “Poppy” Northcutt, who worked as an engineer for the Apollo program, and she told him, “You know, everything was there. We were ready to go farther into deep space. If we had kept going, we would have had people on Mars 30 years ago.”

Still, recent developments, like the work Jeff Bezos’s Blue Origin and Elon Musk’s SpaceX, have made him hopeful for the future: “I think we will go back to the Moon. Something will be set up on the Moon.”

“Apollo: Missions to the Moon” will air on National Geographic on Sunday, July 7 at 9pm (8pm Central time).