Nintendo’s Mario Maker series is among the most generous gifts the company could have given to its fans, and the new installment on Switch is better than its predecessor in every way. Yet despite the freedom and encouragement it gives, it’s hard not to feel a gentle tug groundward when your ambitions begin to soar.

For those unfamiliar with Mario Maker, the original was a totally unexpected joy on the Wii U and one of the few games that truly took advantage of that console’s unusual hardware. It allowed players to use the touchscreen and stylus to put together Mario levels in a variety of styles, and the resulting number and complexity of creations boggled minds worldwide.

The sequel, Super Mario Maker 2, announced in February and released at the end of June, is a natural evolution of the previous game. It adds new items, new styles, new ways to sculpt the landscape and a variety of other complexifiers like conditions you can impose on players: no jumping, carry this item to the goal and so on. 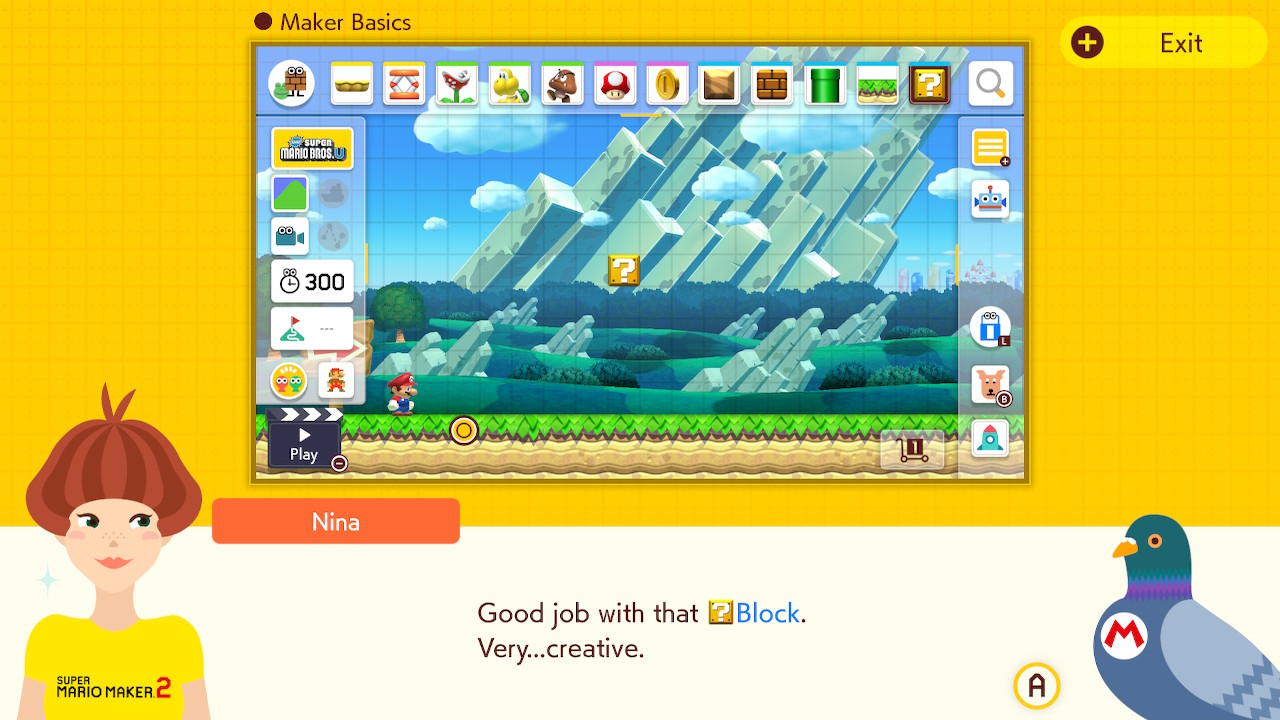 A welcome addition is the robust tutorial for the maker mode, featuring the weird/cute duo Nina and Kawamura (a girl and a pigeon) walking the player through the tools and providing what amounts to platformer design 101. There’s also a single-player campaign: A hundred unconnected levels that let you have some good old Nintendo-designed Mario fun, but also serve as inspiration for how to use various blocks and level styles. 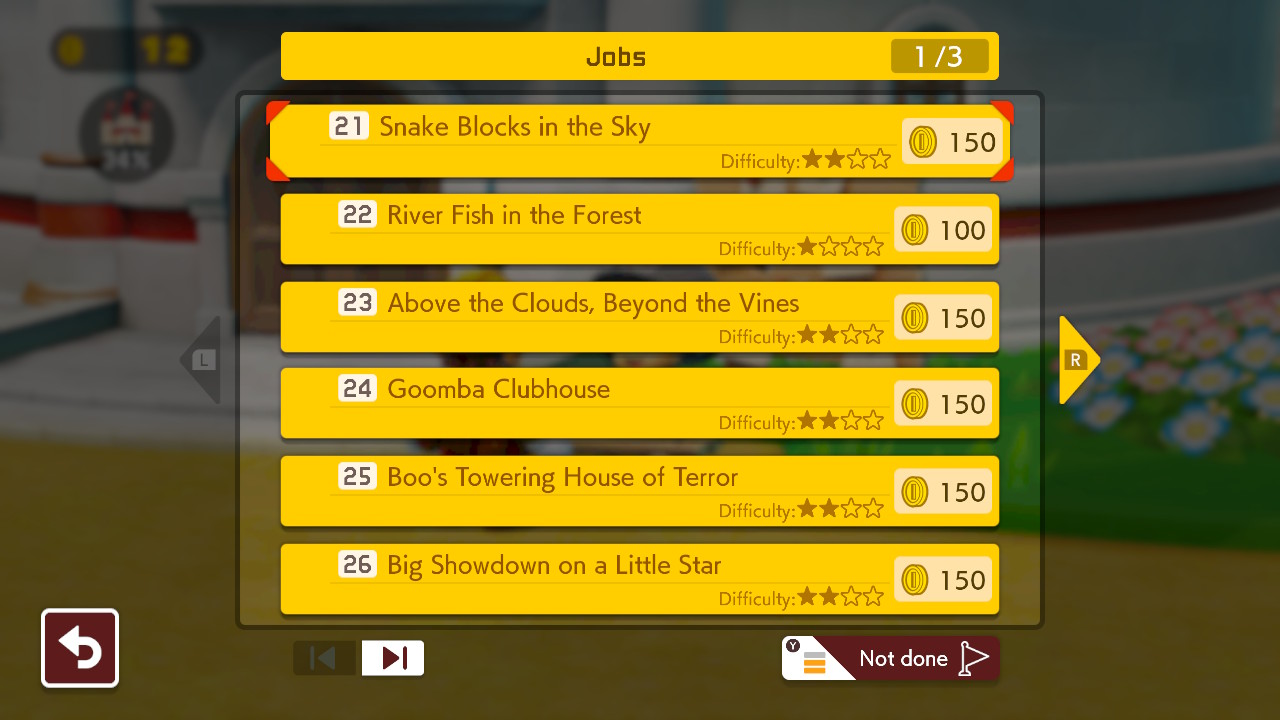 Within days of release, the “Course World” is already brimming with strange and fun levels to play, full of ingenious ideas and uses for blocks and enemies that will have you shaking your head — and biting your controller with rage. There’s even a whole category for “auto-Mario” levels (a strange and wonderful genre that sprang out of the original Mario Maker) that take the player through an adventure sometimes without any input at all.

Importantly, this game adds a few things that Mario levels really need: locked doors and keys, for instance, or checkpoints so players don’t have to replay a punishing section. That opens up things considerably and already I have seen lots of interesting levels taking advantage of this to make you visit multiple areas, beat a certain enemy before proceeding, and such. 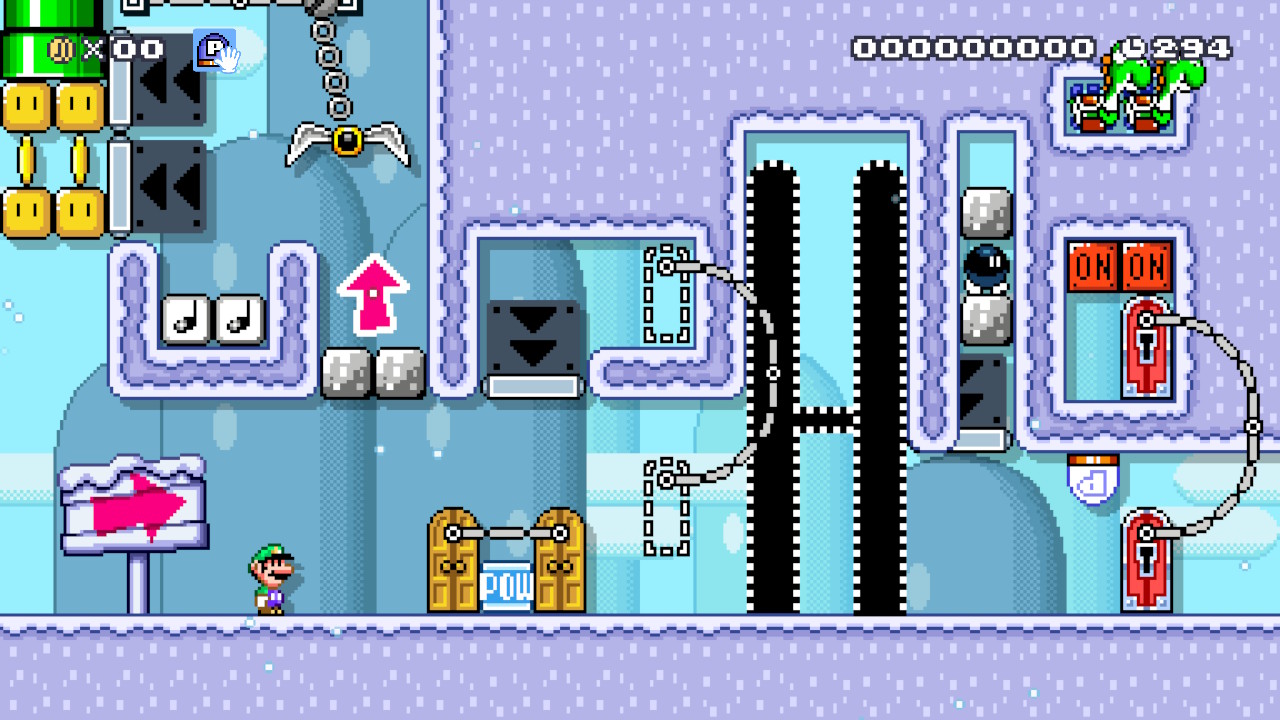 This devious little level is nothing like Mario, yet uses Mario rules

I’ll let other reviews go into detail about the various more granular improvements the game makes. Suffice it to say here that it’s a ton of fun, making levels is hard and between the single-player, multiplayer and Course World modes, Mario Maker 2 more than justifies its purchase price. For my part I want to call attention to something I feel is important about the game and the carefully thought-out limitations it places on creators.

Nintendo’s zeal for seeking and destroying copyright violations is well known; just last week we had Mario Royale shut down almost instantly. And the company is also well known for its highly conservative stance on licensing, in some ways at least — for instance, only ever letting Zelda games appear on Nintendo consoles rather than having them come out on Sony and Microsoft platforms as well. There are plenty of good reasons for that, I’m just making a note of it.

Nintendo’s fan base, however, is the only one that rivals it for zeal, and over the years they have found many ways to modify or reuse the properties that Nintendo has been happy to either let lie or recycle tamely via Virtual Console. Nintendo would never, for example, have made Mario Royale. Nor would it make something like the A Link to the Past Randomizer, which changes the locations of items in the classic game to make each playthrough unique. (A similar one exists for Super Metroid and other beloved and much-played classics.)

Again, Nintendo’s philosophy forbids many of these things — their idea of games is a much more pure one and it’s hard to fault it when the results are things like Super Mario Odyssey and Breath of the Wild. But players want more, and they regularly do whatever they can to break Nintendo’s creations out of the carefully manicured walled gardens the company has long cultivated for them.

This title essentially performs a bleed on the community that is so fervently dedicated to playing Nintendo’s games outside of Nintendo’s rules. By letting players make their own levels, and by giving them a tool that’s really quite powerful to do so, they remove a great deal of the pressure that has built up and resulted in things like rom hacks. 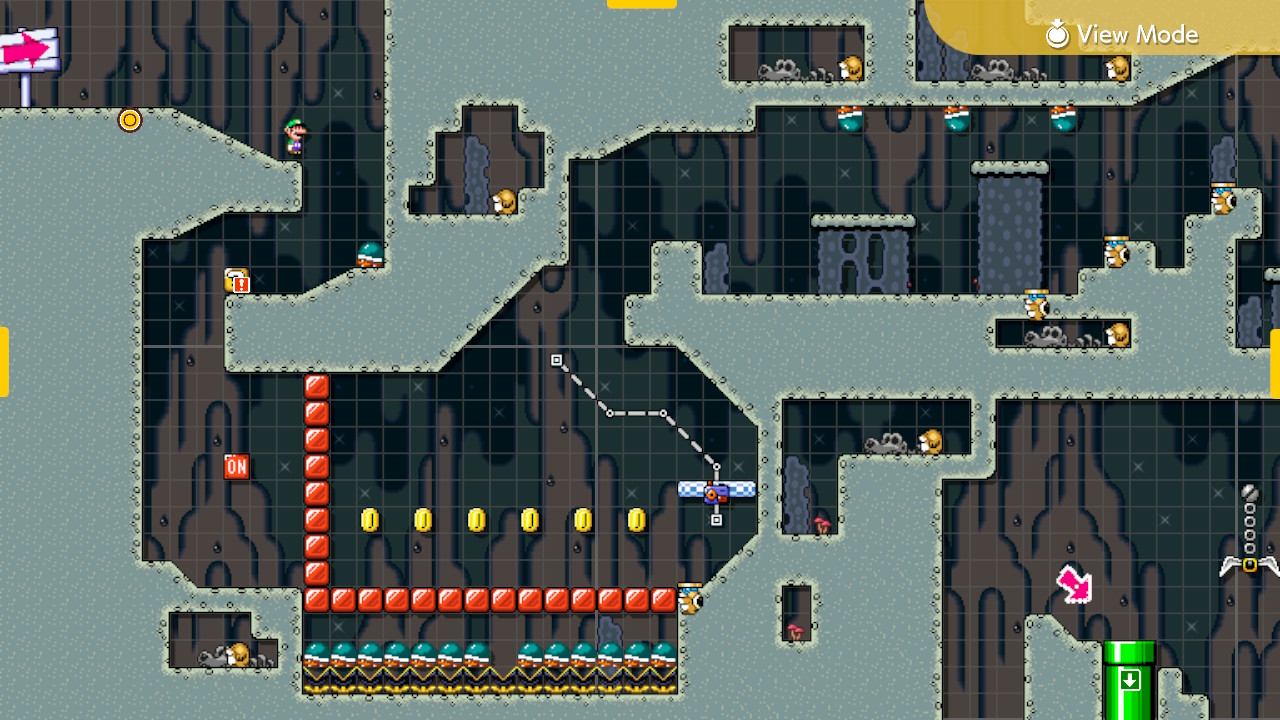 The second game especially opens up the creative floodgates, since the new items and capabilities make possible the complex levels that have made up the best of Mario from the beginning. Straight-up platforming is always fun, but Nintendo’s level designers have learned to theme each level with a specific skill set or feel in mind, and the sequel’s tools enable that to take place in a much greater way than before.

And yet there are some purposeful omissions. The most purposeful is the lack of any ability to tie together levels using an overworld map or even a 1-1, 1-2, 1-3 structure. While it’s possible some creators may be able to circumvent this in a small way, this is a clear sign from Nintendo that this is a tool for making levels, not games.

Withholding higher structure (that could be as simple as designing playlists) is a strategic move that reserves that structure for official games. And allowing for easy sharing of levels and playlists, instead of relying on Nintendo’s own algorithms and onerous number-based sharing system, makes it trivial for the company to control the means of distribution. 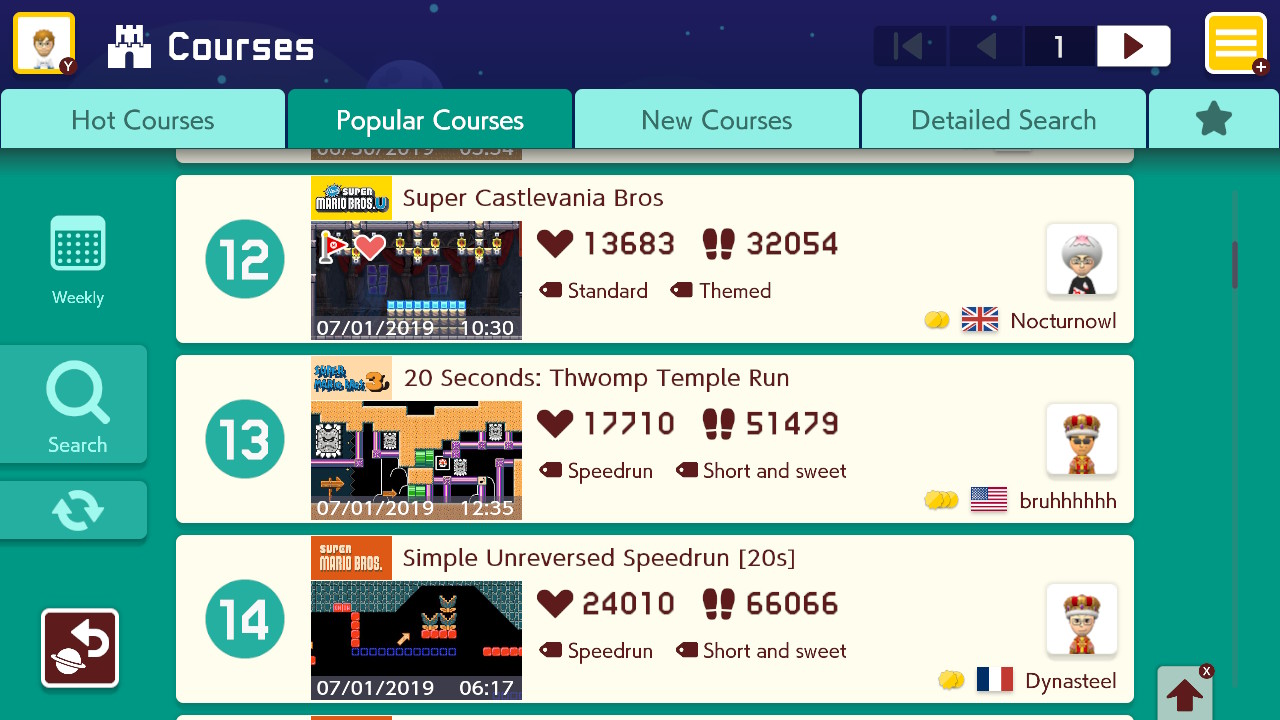 Again, I’m not saying they shouldn’t, exactly — and there will be thousands and thousands of levels worth playing, more than any one player could possibly want. But what’s clear from the popularity of Mario Maker is that millions of players also want to see Nintendo’s creations unbound by Nintendo’s strict rules. And while Mario Maker 2 loosens those rules considerably, it also indicates the limits of what Nintendo is willing to allow its community to do.

That said, within those limits there are near infinite variations and, in fact, it’s probable that the game’s creators deliberated intensely on what to include and what to exclude. I’m desperately missing the invincible giant moles from SMW, but would having them (and a dozen other rare critters) in the enemy selection just clutter it up? I’d like to have an overworld, but for the casual maker or speedrunning level maker, wouldn’t that really just be an extra step that would be skipped more often than not? The intention of the game is to facilitate creation, but part of that is knowing what tools not to provide.

Ultimately my wish that Nintendo demolish the walls of its garden amounts to nothing more than asking them to give away the keys to the castle, so to speak. And it’s not like I’m being oppressed here — I can barely put together a decent course of my own, and others are happy to work within these constraints. Not being a genius Maker myself, I tend to see the restrictions rather than the possibilities.

I just want more Mario, and in fact more Mario than Nintendo is willing to give. With Mario Maker it has secured me a constant drip-feed of Mario-adjacent content that’s just enough to keep me playing but also just limited enough that I look forward with immense impatience to the next “real” game. Whether that’s a kindness or a cruelty I can’t say, but whatever it is, it’s going to take up a hell of a lot of my time over the next couple of years.