MoviePass is temporarily suspending its service, starting on July 4, in order to finish working on improvements to its mobile app, the company announced today. The hiatus comes after a difficult year for the cash-burning company, and as Regal, the second-largest movie theater chain in the United States, is reportedly preparing to launch its own ticket subscription service.

MoviePass’ announcement said the hiatus will start at 5 A.M. Eastern Time on July 4 and that subscribers will be automatically credited for the number of affected days once service resumes. It did not say when service would return, but replies to customers from its Twitter account say the company “estimate[s] this process will take several weeks.” 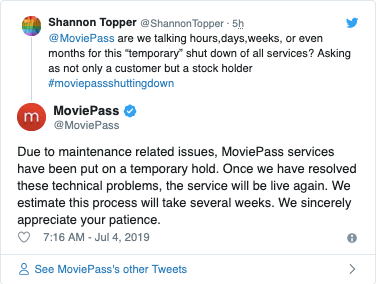 This is an especially inopportune time for a hiatus because the July 4 holiday is when many major titles are released. In a press statement, MoviePass CEO Mitch Lowe said, “There’s never a good time to have to do this. But to complete the improved version of our app, one that we believe will provide a much better experience for our subscribers, it has to be done.”

He added that “We have listened and we understand the frustrations of our subscribers. To provide the level of service you deserve and we can be proud of, we need to improve our mobile app. We plan to make this improvement by utilizing an enhanced technology platform, which is in the final stages of completion.”

MoviePass (owned by Helios and Matheson Analytics) and competitor Sinemia both offer subscription plans that give users access to multiple films in one month for a flat fee, but they have been locked in an expensive war of attrition as they compete for subscribers and box office sales. Both companies have also been hit with constant complaints about poor customer service. When Sinemia launched, it was able to capitalize on anti-MoviePass sentiment, but quickly began to rack up its own negative feedback about hidden fees, cancellations without refunds and poor app performance.

This makes room for new rivals to step in. For example, AMC’s A-List service reached 785,000 subscribers in May, and if Regal’s version comes to fruition, it may also appeal to movie-goers who are willing to stick to one chain in exchange for consistent service.