Just as the Bluetooth headset ushered in an era of hands-free calling, AR startups are trying to convince manufacturing startups that AR headsets will bring new efficiencies with hands-free computing.

As Magic Leap and Microsoft have dropped hundreds of millions trying to spend their way into new tech modalities for enterprise customers, smaller players are relying on less groundbreaking hardware and hoping that easy-to-use software can drive new customers into their arms. One player using this approach is an AR startup based just outside of Portland called RealWear. They aren’t promising digital holograms and floating whales, but they’ve received more than $100 million from investors that seem to believe in a more “conservative” approach to enterprise AR.

RealWear’s HMT-1 hardware is akin to the form factor of yesteryear’s Google Glass, but the tech is even more straightforward; it’s not a transparent display, just a small screen in a worker’s line-of-site that can be pushed out of the way when not needed. When it comes to differentiating a hardware startup that isn’t relying on its own hardware advances, there are definitely risks that another deep-pocketed player can replicate what they’ve done, though RealWear certainly isn’t short on investor cash for the time being.

The company announced today that they’ve pulled in about $81 million in funding since they announced their Series A early last year. About $56 million of that was Series B equity funding, while they also raised $25 million in debt. The latest round was led by Teradyne, with Bose Ventures, Qualcomm Ventures, Kopin Corporation and JPMorgan Chase Co. also participating. If that last investor draws your attention, the company tells TechCrunch they are closely eyeing an IPO, a unique move in an industry that has proven heavily reliant on VC cash.

Investors have seen major potential in the enterprise AR space, but major players have flared out in the past 12 months, leaving some wary of making another bet in the space. Earlier this year, we reported that ODG, which had raised $58 million for its AR glasses, was in the midst of a fire sale for its IP. The same fate came to Meta months later, which raised $73 million. All the while, Magic Leap has continued to dominate AR venture capital deals, but it isn’t clear what progress they are making with enterprise customers relative to their $2.6 billion raised.

RealWear has raised tens of millions, yet most of that cash is going to sales rather than R&D, a benefit the company has from licensing other firms’ tech rather than trying to solve the unsolved AR optics issues. The approach has worked, at least in terms of quickly building a business on its way to being cash flow positive. The company said it had about $12 million in revenue last year, and was estimating $25-30 million this year. 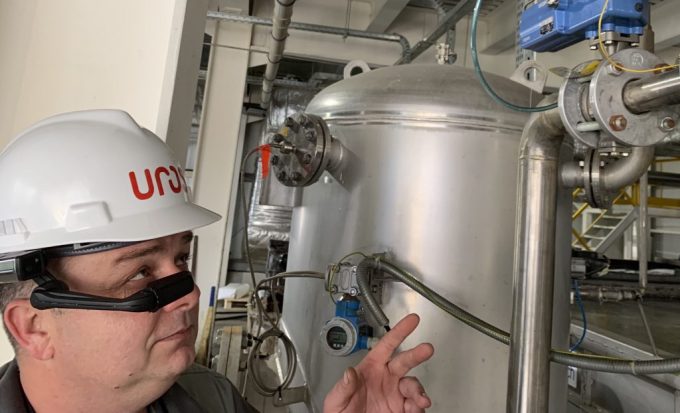 For now, the name of the game for RealWear is converting pilots into paid rollouts. CEO Andy Lowery tells me that about 95% of the company’s 2018 revenue came from paid pilots, but that there have already been some big conversions. The company tells TechCrunch they have shipped 15,000 units in the past 18 months, though a recent major deal with Turkish telecom company UROS will force them to scale much more quickly. The firm announced in April that they are ordering 10,000 of RealWear’s devices as part of a major tech push in Kazakhstan.

RealWear is also working with customers like Colgate, BMW, Walmart and Coca-Cola.