Managing people is perhaps the most challenging thing most people will have to learn in the course of their professional lives – especially because there’s no one ‘right’ way to do it. But Ottawa-based startup Fellow is hoping to ease the learning curve for new managers, and improve and reinforce the habits of experienced ones with their new people management platform software.

Fellow has raised $6.5 million in seed funding, from investors including Inovia Capital, Felicis Ventures, Garage Capital and a number of angels. The funding announcement comes alongside the announcement of their first customers, including Shopify (disclosure: I worked at Shopify when Fellow was implemented and was an early tester of this product, which is why I can can actually speak to how it works for users).

The Fellow platform is essentially a way to help team leads interact with their reports, and vice versa. It’s a feedback tool that you can use to collect insight on your team from across the company; it includes meeting supplemental suggestions and templates for one-on-ones, and even provides helpful suggestions like recommending you have a one-on-one when you haven’t in a while; and it all lives in the cloud, with integrations for other key workplace software like Slack that help it integrate with your existing flow.

Fellow co-founder and CEO Aydin Mirzaee and his co-founding team have previous experience building companies: They founded Fluidware, a survey software company, in 2008 and then sold it to SurveyMonkey in 2014. In growing the team to over 100 people, Mirzaee says they realized where there were gaps, both in his leadership team’s knowledge and in available solutions on the market.

“Starting the last company, we were in our early 20s, and like the way that we used to learn different practices was by using software, like if you use the Salesforce, and you know nothing about sales, you’ll learn some things about sales,” Mirzaee told me in an interview. “If you don’t know about marketing, use Marketo, and you’ll learn some things about marketing. And you know, from our perspective, as soon as we started actually having some traction and customers and then hired some people, we just got thrown into it. So it was ‘Okay, now, I guess we’re managers.’ And then eventually we became managers of managers.” 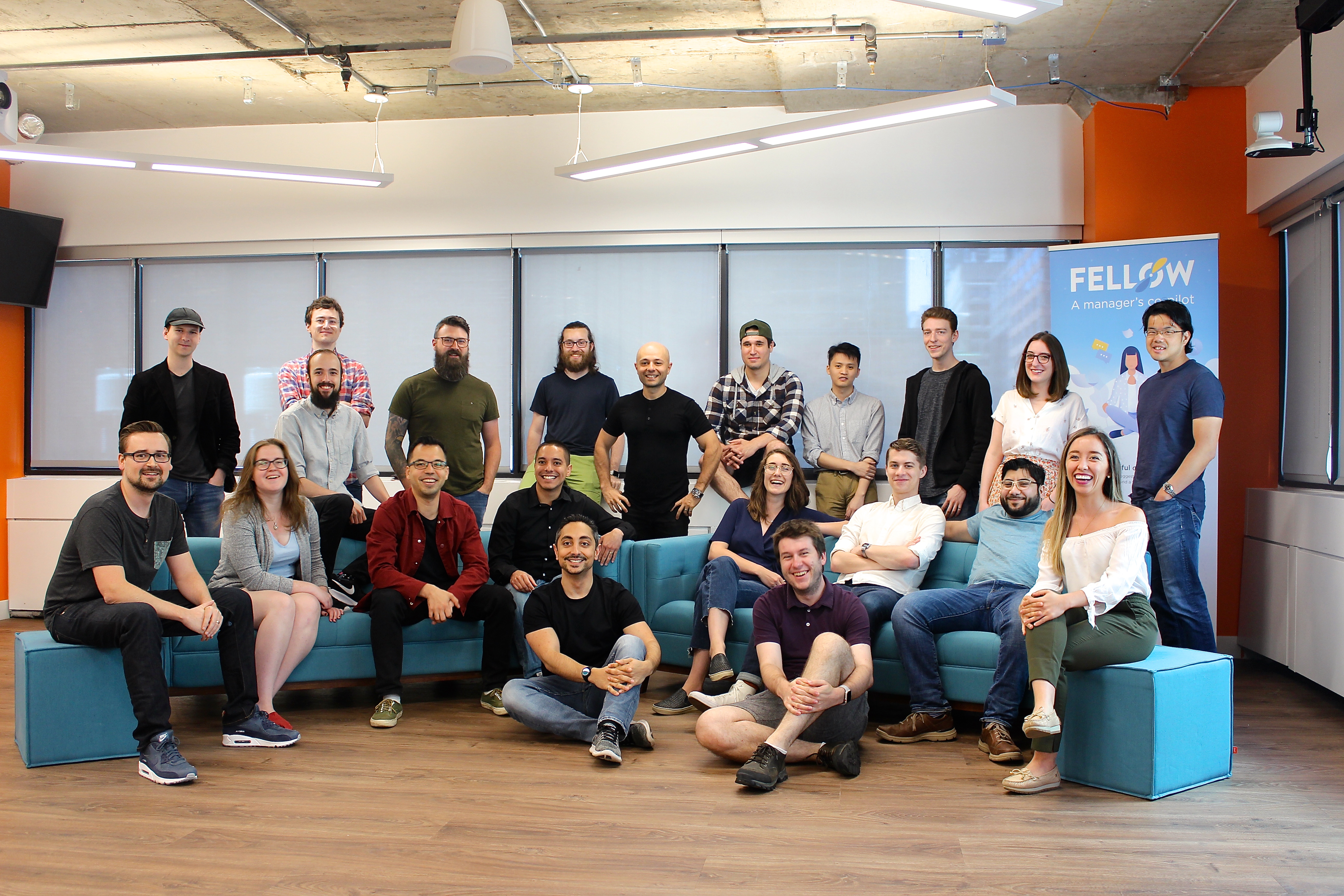 Mirzaee and his team then wondered why a tool like Salesforce or Marketo didn’t exist for management. “Why is it that when you get promoted to become a manager, there isn’t an equivalent tool to help you with that?” he said.

Concept in hand, Fellow set out to build its software, and what it came up with is a smartly designed, user-friendly platform that is accessible to anyone regardless of technical expertise or experience with management practice and training. I can attest to this first-hand, since I was a first-time manager using Fellow to lead a team during my time at Shopify – part of the beta testing process that helped develop the product into something that’s ready for broader release. I was not alone in my relative lack of management knowledge, Mirzaee said, and that’s part of why they saw a clear need for this product.

“The more we did research, the more we figured out that obviously, managers are really important,” he explained. “70% of customer engagements are due to managers, for instance. And when people leave companies, they tend to leave the manager, not the company. The more we dug into it the more it was clear that there truly was this management problem –  management crisis almost, and that nobody really had built a great tool for managers and their teams like.”

Fellow’s tool is flexible enough to work with specific management methodologies like setting SMART goals or OKRs for team members, and managers can use pre-set templates or build their own for things like setting meeting talking points, or gathering feedback from the colleagues of their reports.

Right now, Fellow is live with a number of clients including Shopify, Vidyard, Tulip, North and more, and it’s adding new clients who sign up on a case-by-case basis, but increasing the pace at which it onboard new customers. Mirzaee explained that it hopes to open sign ups entirely later this year.