The Customer Data Platform (CDP) has certainly been getting a lot of attention in marketing software circles over the last year as big dawgs like Salesforce and Adobe enter the fray, but Amperity, a Seattle-based startup, has been building a CDP solution since it launched in 2016, and today it announced some updates to give customers more control over the platform.

Chris Jones, chief product officer at Amperity, says this is an important step for the startup. “If you think about the evolution of our company, we started with an idea that turned into a [Marketing Data Platform], which was the engine that powered all of that, but that engine was largely operated by our delivery team. We’re now putting the power of that engine into the customers’ hands and giving them the full access to that,” Jones explained.

That is giving customers — which include Alaska Airlines, Nordstrom and The Gap — the power to control how the software works in the context of their companies, rather than using a black box approach where you have to use the software as delivered. He says that customers want the ability to start using the system to gain insights on their own.

One of the primary pieces in the newest version of Amperity to allow them to do that is Stitch, a tool that lets users pull together all of the interactions from a customer in a single view —  ingesting the data, sorting, deduplicating it and delivering a list of all the interactions a brand has had with a given customer. From there, they can use the new Customer 360 visualization to get a more graphical view of the data. 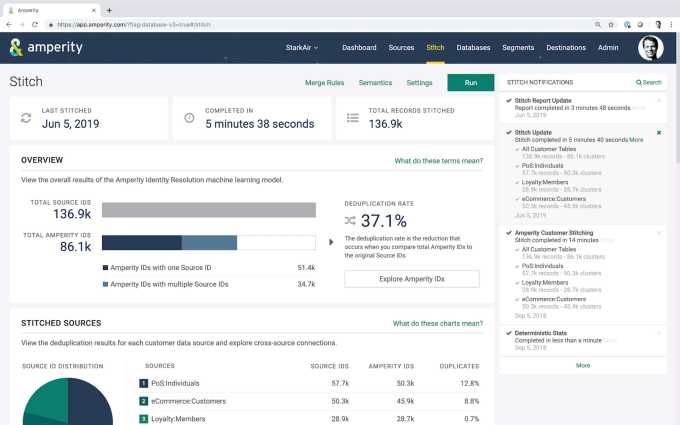 Jones says companies can use this data to help different groups within a company, whether marketing, sales or service, understand the customer better before or during an interaction. For example, a marketer can segment the data in a very granular way to find all of the regular customers who aren’t part of the company loyalty program, and deliver them an email listing all of the benefits of joining.

Amperity launched in 2016, and has raised $37 million across two rounds. Its most recent funding came in 2017, a $28 million investment led by Tiger Global Management, according to Crunchbase data.