The UK government has announced the next phase of a review of the law around the making and sharing of non-consensual intimate images, with ministers saying they want to ensure it keeps pace with evolving digital tech trends.

The review is being initiated in response to concerns that abusive and offensive communications are on the rise, as a result of it becoming easier to create and distribute sexual images of people online without their permission.

On the latter practice, the screengrab below is of one of two unsolicited messages I received as pop-ups on my phone in the space of a few seconds while waiting at a UK airport gate — and before I’d had a chance to locate the iOS master setting that actually nixes Bluetooth.

On iOS, even without accepting the AirDrop the cyberflasher is still able to send an unsolicited placeholder image with their request.

Safe to say, this example is at the tamer end of what tends to be involved. More often it’s actual dick pics fired at people’s phones, not a parrot-friendly silicone substitute… 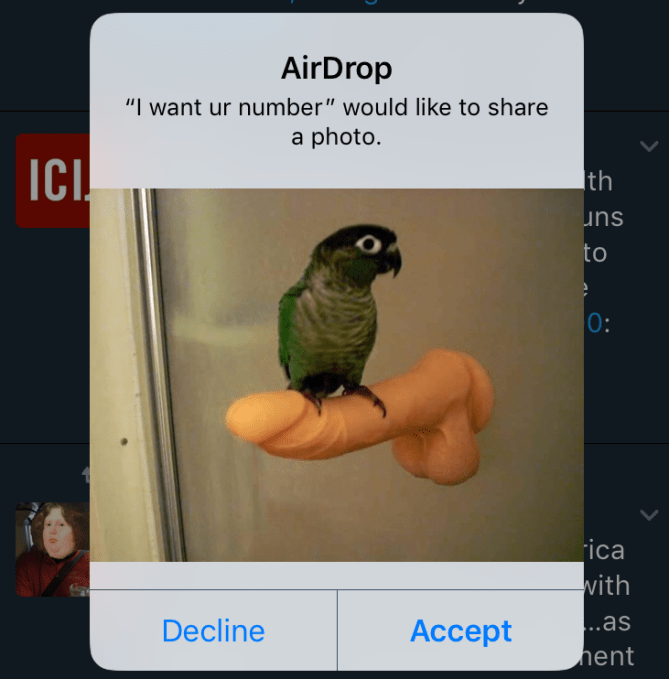 But the government says that while it feels the law in this area is “robust”, it is keen not to be seen as complacent — hence continuing to keep it under review.

It will also hold a public consultation to help assess whether changes in the law are required.

The Law Commission published Phase 1 of their review of Abusive and Offensive Online Communications on November 1 last year — a scoping report setting out the current criminal law which applies.

The second phase, announced today, will consider the non-consensual taking and sharing of intimate images specifically — and look at possible recommendations for reform. Though it will not report for two years so any changes to the law are likely to take several years to make it onto the statute books.

Commenting in a statement, justice minister Paul Maynard said: “No one should have to suffer the immense distress of having intimate images taken or shared without consent. We are acting to make sure our laws keep pace with emerging technology and trends in these disturbing and humiliating crimes.”

“Too many young people are falling victim to co-ordinated abuse online or the trauma of having their private sexual images shared. That’s not the online world I want our children to grow up in,” added the secretary of state for digital issues, Jeremy Wright, in another supporting statement.

“We’ve already set out world-leading plans to put a new duty of care on online platforms towards their users, overseen by an independent regulator with teeth. This Review will ensure that the current law is fit for purpose as we deliver our commitment to make the UK the safest place to be online.”

The Law Commission review will begin on July 1, 2019 and report back to the government in summer 2021.