Reddit’s r/The_Donald subreddit has been a lingering issue for the site’s leadership.

The community, which was organized in the lead-in to Trump’s presidential run, has come to represent much of the site’s failures in uniformly enforcing content policies. Add in Russian election interference and a dollop of racism, sexism and xenophobia and you have the recipe for a long-simmering scandal that has finally coming to a head after the community hosted “threats against the police and public figures.”

Today, Reddit quietly quarantined the Donald Trump-focused subreddit, meaning that the content on the subreddit will stay self-contained at its URL for non-subscribers and will require an opt-in screen for visiting users. 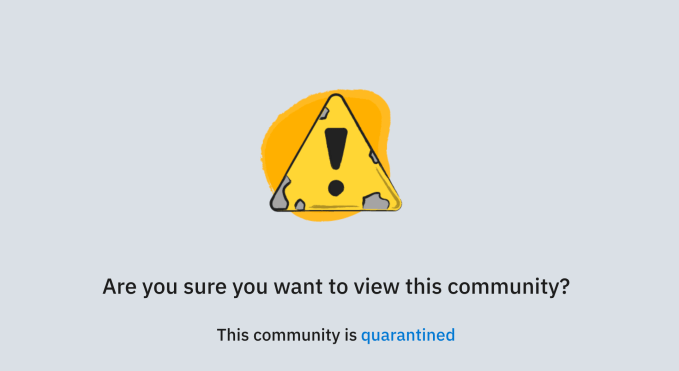 In a lengthy, carefully-worded statement to TechCrunch regarding the action, a Reddit spokesperson said, “We are clear in our site-wide policies that posting content that encourages or threatens violence is not allowed on Reddit. As we have shared, we are sensitive to what could be considered political speech, however, recent behaviors including threats against the police and public figures is content that is prohibited by our violence policy. As a result, we have actioned individual users and quarantined the subreddit.”

The step is far from the ban that users have long requested from the company’s CEO Steve Huffman in his regular site-wide Q&As. Just last month, Huffman addressed some of the issues r/The_Donald had been causing:

“…Yes, we do see individual posts and comments that cross the line, but the offending content also gets removed as we ask and expect, and we also take action against those individual users and accounts with suspensions or full bans from the site as appropriate. I wish there was a solution that was as simple as banning the community—certainly it would make some things easier—but the reality is that banning a large political community that isn’t in violation of our policies would be hugely problematic, not just for Reddit, but for our democracy generally…”

Reddit has had a history of being conservative in its efforts to phase out controversial subreddits. The venture-backed only recently banned a subreddit called r/WatchPeopleDie in the wake of the New Zealand mosque shooting.

In a post on the subreddit, r/The_Donald moderator u/shadowman3001 said, “It would seem they’ve set up an impossible standard as a reason to kill us before the 2020 election,” in response to the company’s expectations for banning all violating user content on the subreddit.

Just last month, the Trump administration shared a public survey asking Americans to respond if they had been censored by social media companies.