Kopi Kenangan, a startup that wants to make quality, fresh coffee affordable to Indonesian consumers, has raised $20 million as it begins to consider overseas expansion in Southeast Asia.

Started in 2017 by Edward Tirtanata and James Prananto, the company aims to bridge the gap between cheap street vendor coffee and drinks priced at the higher end of the spectrum from international chains such as Starbucks — the ‘sweet spot,’ you might say. That delta is a major reason why Indonesia, which is the world’s fourth-largest coffee exporter, has Southeast Asia’s lowest coffee consumption per person, Tirtanata argued.

Kopi Kenangan is also unashamedly local. Rather than lattes, mochas or flat whites, its top-selling drink is ‘Es Kopi Kenangan Mantan,’ a sweet Indonesian coffee that uses palm sugar, among other local Southeast Asian beverages. Ingredients are sourced locally, including four different coffee blends from across the country and organic palm sugar. Tirtanata told TechCrunch that the raw materials aren’t cheap, but they are essential for a “customer-first” company.

Already, Kopi Kenangan has an impressive retail footprint, including 80 stores across eight cities. The company makes use of on-demand services like Go-Jek (GoFood) and Grab (GrabFood) which account for one-third of all orders, according to Tirtanata, rather than running its out fleet as some competitors.

Impressively, the business is profitable thanks to a managed inventory and a focus on waste that sees neighboring branches share resources. Tirtanata said that keeping the business sustainable is a key focus even though it is now flush with new capital. 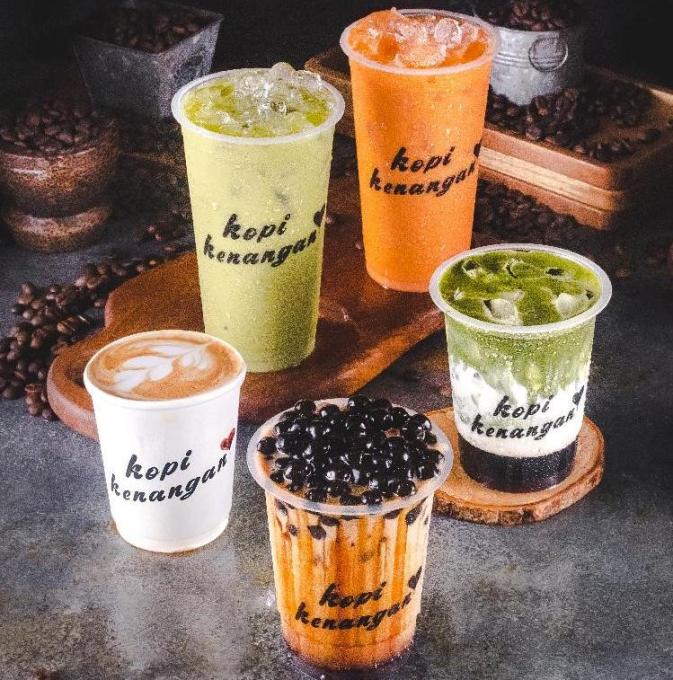 A selection of Kopi Kenangan drinks

With this new funding under its belt, the company is eying significant expansion both nationally and internationally. Tirtanata said the plan is to reach 500 stores by next year, which, he claimed, will include locations in two overseas markets. He declined to name them, but did reveal that hiring is already underway in both countries.

As well as growing its commercial footprint, Kopi Kenangan will use the capital to build out its logistics to support the projected rise in business. (It claims to sell “close to” one million cups of coffee per month, up from 175,000 cups in October.)

Chief on the list is logistics to track coffee supplies and shipments — Tirtanata admitted it’s natural that there will occasionally be some beans that are sub-standard, and this will help root them out — using RFID and other tech. The startup’s development team is also poised to work on a new Internet of Things feature, details of which will come later, and improvements to the Kopi Kenangan apps and digital service.

Unlike newer competitors like Fore Coffee, which takes its cues from China’s Luckin by placing emphasis on digital delivery, Kopi Kenangan is content to use third-party on-demand apps and its own ‘new retail’ experience. Its app enables customers to pre-order coffee for collection at their nearest branch. If they are in an unfamiliar location, it will guide them to the store.