If you asked the average person on the street what robotic process automation is, most probably wouldn’t have a clue. Yet new data from Gartner finds the RPA market grew over 63% last year, making it the fastest growing enterprise software category. It is worth noting, however, that the overall market value of $846.2 million remains rather modest compared to other multi-billion dollar enterprise software categories.

RPA helps companies automate a set of highly manual processes.The beauty of RPA, and why companies like it so much, is that it enables customers to bring a level of automation to legacy processes without having to rip and replace the legacy systems.

As Gartner points out, this plays well in companies with large amounts of legacy infrastructure like banks, insurance companies, telcos and utilities.”The ability to integrate legacy systems is the key driver for RPA projects. By using this technology, organizations can quickly accelerate their digital transformation initiatives, while unlocking the value associated with past technology investments,” Fabrizio Biscotti, research vice president at Gartner said in a statement.

The biggest winner in this rapidly growing market is UIPath, the startup that raised $568 million on a fat $7 billion valuation last year. One reason it’s attracted so much attention is its incredible growth trajectory. Consider that UIPath brought in $15.7 million in revenue in 2017 and increased that by a whopping 629.5% to $114.8 million last year. That kind of growth tends to get you noticed. It was good for 13.6% marketshare and first place, all the way up from fifth place in 2017, according to Gartner.

Another startup nearly as hot as UIPath is Automation Anywhere, which grabbed $300M from SoftBank at a $2.6B valuation last year. The two companies have raised a gaudy $1.5 billion between them with UIPath bringing in an even $1 billion and Automation Anywhere getting $550 million, according to Crunchbase. 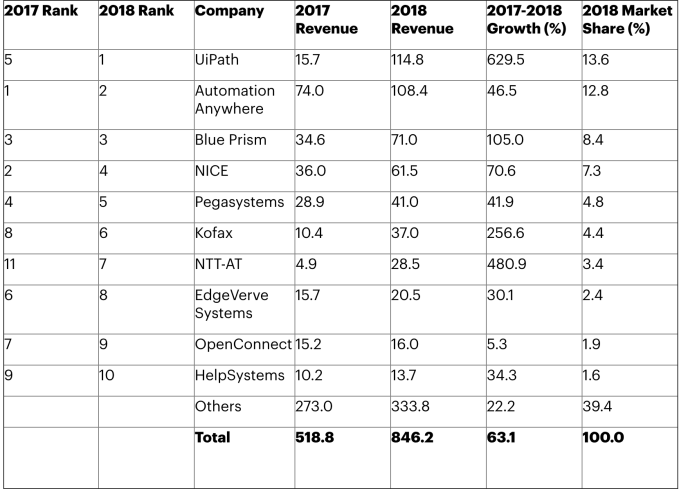 Blue Prism, which went public in 2016, issued $130 million in stock last year to raise some more funds, probably to help keep up with UIPath and Automation Anywhere. Whatever the reason, it more than doubled its revenue from $34.6 million to $71 million, a healthy growth rate of 105 percent, good for third place with 8.4 percent marketshare.

For now, everyone it seems is winning as the market grows in leaps and bounds. In fact, the growth numbers down the line are impressive with NTT-ATT growing 456% and Kofax growing 256% year over year as two prime examples, but even with those growth numbers, the marketshare begins to fragment into much smaller bites.

While the market is still very much in a development phase, which could account for this level of growth and jockeying for market position, at some point that fragmentation at the bottom of the market might lead to consolidation as companies try to buy additional marketshare.