Google and PayPal have been strategic partners for some time. The companies in 2017 announced that PayPal would become a payment method in Android Pay, the service that later rebranded as Google Pay. Last year, users who added PayPal as a payment method on Google Pay could then pay for services like Gmail, YouTube, Google Play and Google Store purchases via a PayPal option in Google Pay. Now, a similar integration is making its way to online merchants who accept Google Pay on their website or mobile app.

Explains Google, hundreds of millions of customers already have payment methods saved to their Google Account — including, in some cases, PayPal, thanks to the 2018 integration.

With this expanded integration, merchants can opt to enable PayPal as a payment method in their own Google Pay integration — something that’s easily done if Google Pay has already been implemented on their site. All that’s required is only a small code change to the list of allowed payment methods (see below). 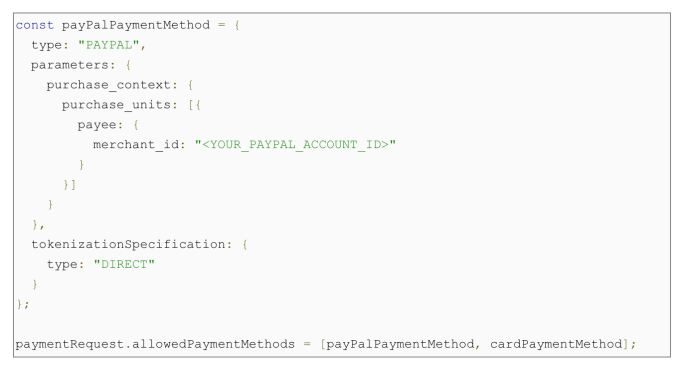 At that point forward, any online shopper who wants to check out using Google Pay will have the option of selecting PayPal to make the purchase.

The benefit of this integration for consumers is that they won’t have to sign in to PayPal when they use it through Google Pay, which cuts down the number of steps to take at checkout. That, in turn, can increase conversions. They’ll also have access to PayPal’s Purchase Protection and Return Shipping benefits.

For online merchants who are also PayPal merchants, when a customer selects PayPal through Google Pay, the merchant receives the money in their PayPal Business Account within minutes. 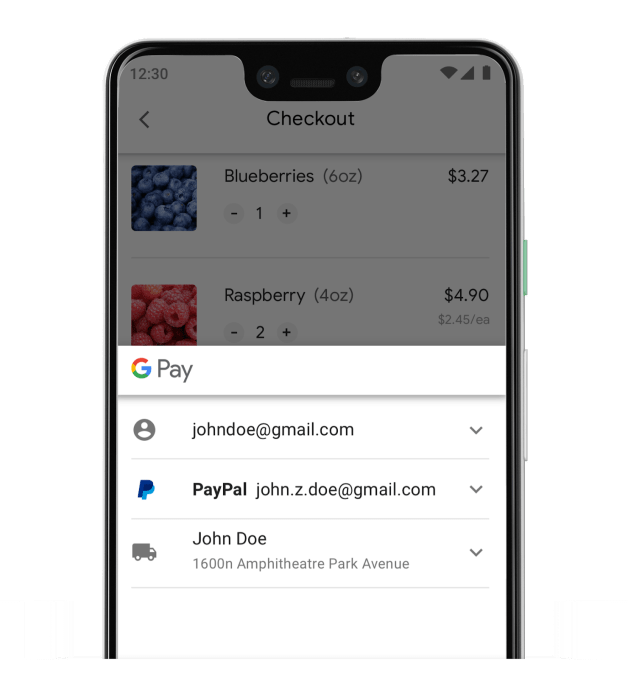 PayPal’s embrace of its one-time competitors like Apple and Google actually began several years ago, and is still gaining ground as the technology platforms better integrate its service.

The company began teaming up with rivals like Visa, Mastercard, Apple, Google, Samsung and Walmart to help it achieve better traction both at point-of-sale in retail stores and within the popular mobile wallets offered by mobile OS platform makers Apple, Google and Samsung. Today, PayPal lives alongside other payment cards — like credit and debit cards — inside these mobile wallets.

For merchants that want to offer a variety of checkout methods, they can add support for the digital wallet platforms themselves, and PayPal simply comes along for the ride.

The PayPal option for Google Pay works in all 24 countries where customers can link a PayPal account to Google Pay.