Facebook and eBay have been warned by the U.K.’s Competition and Markets Authority (CMA) to do more to tackle the sale of fake reviews on their platforms.

The CMA said today it has found “troubling evidence” of a “thriving marketplace for fake and misleading online reviews.” Though it also writes that it does not believe the platforms themselves are intentionally allowing such content to appear on their sites.

The regulator says it crawled content on eBay and Facebook between November 2018 and June 2019 — finding more than 100 eBay listings offering fake reviews for sale during that time.

Over the same period it also identified 26 Facebook groups where people offered to write fake reviews or where businesses recruited people to write fake and misleading reviews on popular shopping and review sites.

The CMA cites estimates that more than three-quarters of U.K. internet users consider online reviews before making a purchase decision — with “billions” of pounds’ worth of people’s spending being influenced by such content. So the incentives driving a market to trade reviews for money is clear.

Commenting in a statement, the CMA’s CEO, Andrea Coscelli, said: “We want Facebook and eBay to conduct an urgent review of their sites to prevent fake and misleading online reviews from being bought and sold.”

“Lots of us rely on reviews when shopping online to decide what to buy. It is important that people are able to trust that reviews are genuine, rather than something someone has been paid to write,” he added. “Fake reviews mean that people might make the wrong choice and end up with a product or service that’s not right for them. They’re also unfair to businesses who do the right thing.”

The regulator says that after it wrote to eBay and Facebook to inform them of its findings they have both “indicated that they will cooperate.”

Facebook also told the CMA that “most” of the 26 groups it identified have now been removed.

The regulator says he expects the sites to put measures in place to ensure all the identified content is removed — and stop it from reappearing.

At the time of writing, a search of ebay.co.uk for “reviews” returned sellers offering five-star media reviews, five-star Google reviews and five-star Trustpilot reviews as the top three results — one of which was also a sponsored post: 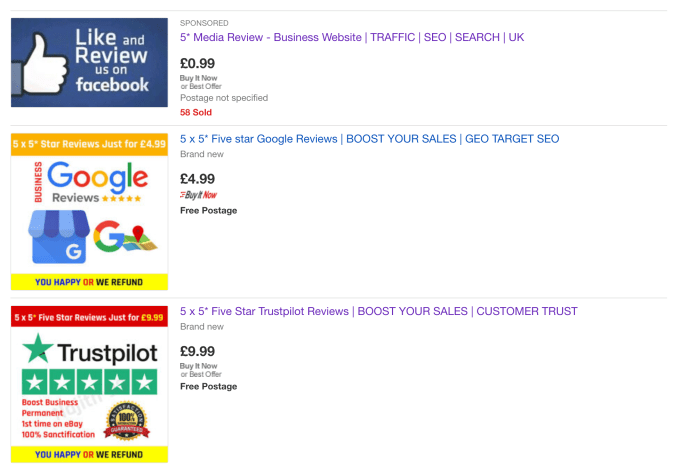 Additional eBay listings included one offering “1/2/3/4/5 Star Freeindex Customer Service Review for business,” priced at £10 and sold by a U.K.-based seller who has been an eBay member since Feb 2011; one five-star review “on Google” that the seller touts with the line, “Boost your business and get new Customers” — at a cost of £2.69; one “100% positive FAST” review for £1; and five five-star reviews on Google priced at £15 — offered by a seller apparently based in Portugal who has been an eBay member since March 2014.

A search of U.K. Facebook groups returned multiple examples of closed groups where sellers appear to be soliciting reviews, either in exchange for goods and/or payment… 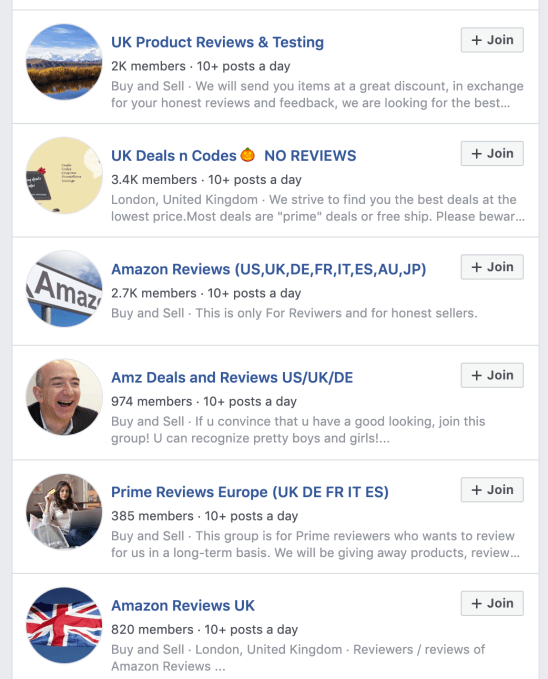 Reached for a response to the CMA’s call for measures to be put in place to tackle the illegal trade in fake reviews, Facebook sent us the following statement — attributed to a spokesperson:

Fraudulent activity is not allowed on Facebook, including the trading of fake reviews. We have removed 24 of the 26 groups and pages that the CMA reported to us yesterday and had already removed a number of them prior to the CMA flagging them to us. We know there is more to do which is why we’ve tripled the size of our safety and security team to 30,000 and continue to invest in technology to help proactively prevent abuse of our platform.

An eBay spokesperson also told us:

We have zero tolerance for fake or misleading reviews. We have informed the CMA that all of the sellers they identified have been suspended. The listings have been removed. Listings such as these are strictly against our policy on illegal activity and we will act where our rules are broken. We welcome the report from the CMA and will work closely with them in reviewing its findings.