From the venue and the flashy event website, Waterloo, Ontario’s True North conference (in its second year) doesn’t seem all that distinct from a laundry list of other major tech events that take place each year across North America. But from the moment its main stage programming kicked off on the first day, it was clear this wasn’t your typical gathering place for the tech industry faithful.

The main stage track kicked off with Communitech CEO Iain Klugman. The event is produced by Communitech, an entrepreneurial support and resource organization founded in 1997 to foster the Waterloo region’s technology industry. Communitech sprung out of BlackBerry and the University of Waterloo and the world-class innovation community that surrounds both.

Klugman, a former communications executive and current board member at a number of Communitech-fostered startups and academic institutions, sounded a cautionary and urgent note that continued throughout the day.

Tech conferences, in general, tend to dwell on optimism and enthusiasm, with brief forays into dark alleys of negative consequences. Not this one. 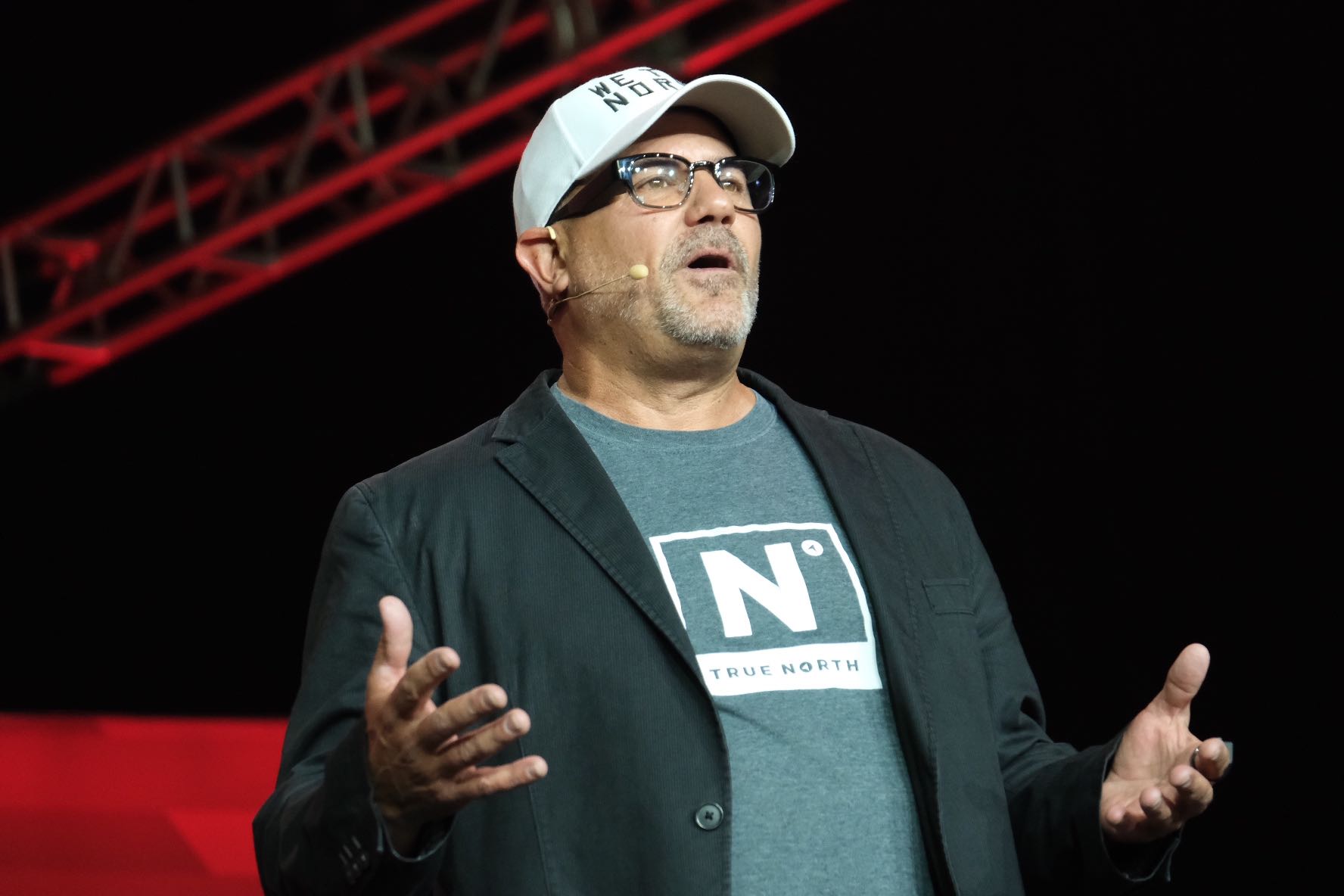 Klugman’s talk touched on opportunity, but it was the opportunity to discuss among a group of peers with influence in the technology industry how they should undertake together “to set things right.” Last year’s event had a similar outcome, resulting in the “Tech for Good Declaration,” which True North describes as “the Canadian tech industry’s living document,” and includes a number of principles designed to help guide technology development with community good in mind.

Rather than changing focus for year two, True North’s organizers seem to have doubled down: Klugman’s opening talk included references to surveillance capitalism and breaches of trust, and included this cheerful analogy: “Technology is like fuel. It can warm our homes or it can burn them to the ground, so we decide which one it will do.”

As a whole, the event is about the “tough choices” faced by the collective “we” of the tech industry, according to Klugman.

True North’s official keynote perfectly took the baton from the intro, as New York Times columnist and longtime political commentator Thomas Friedman took the stage. Friedman, a somewhat controversial figure owing to some of his past political stances, launched into a talk informed by his most recent book, “Thank You for Being Late,” and talked about what we’re seeing now in human history as a moment of intersection of three different forces accelerating in a “nonlinear manner” all at once, including technological development outpacing humanity’s ability to adapt to those changes. 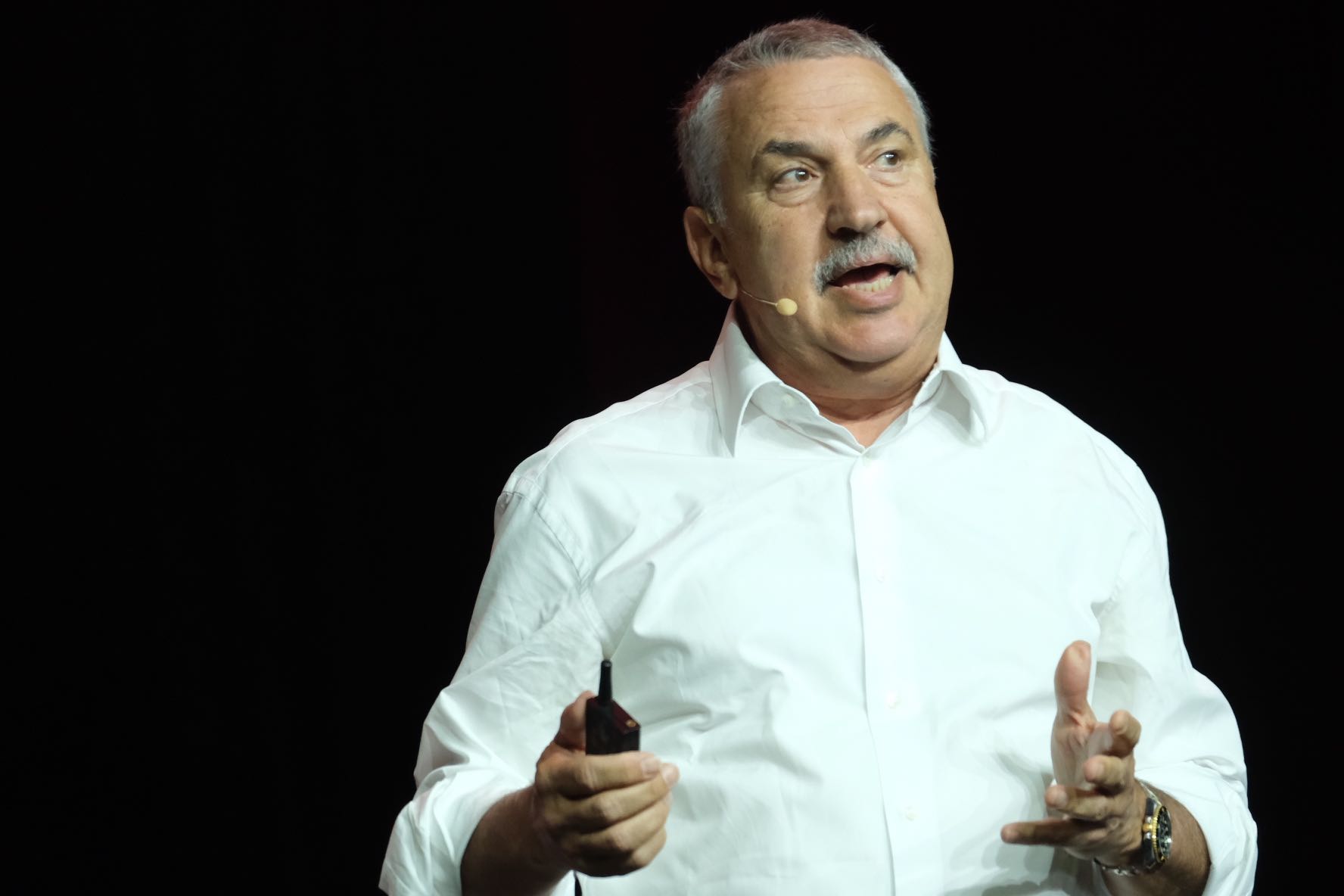 Friedman’s talk ended with him positing that humans spend most of their time today in the essentially “god-less” realm of “cyberspace,” a realm “where we’re all connected but no one’s in charge,” while at the same time we’ve achieved better than ever ability to act with god-like power to control and manipulate our environment. He chided the essential disconnect of powerful forces that act with supreme mastery over technology but with no grounding in sociopolitical understanding (specifically naming Mark Zuckerberg) and those who have the inverse problem (the U.S. Congress, in Friedman’s view).

Overall, Friedman’s views are grounded in what he describes as a place of optimism. But the takeaway is more that humanity is currently at a state where it’s overwhelmed on a number of fronts and out of its depth in terms of having a capacity to cope.

In the afternoon, Robert Mazur (longtime undercover agent and the subject of biopic “The Infiltrator”) discussed his experience tracking down and prosecuting money launderers operating more or less with the blessing of large financial institutions, precisely because their systems were designed around incentive systems that encouraged them but didn’t have protections in place to prevent bad actors from taking advantage. Mazur further elaborated that current telecom industry structure actually makes it even easier than ever to launder large sums relatively unchecked. In essence, it was a warning to be mindful of how the products you build can be exploited by the most malicious actors.

Former Information and Privacy Commissioner for Ontario and creator of the concept of “Privacy by Design” Ann Cavoukian came next, decrying the current state of data “centralized in huge honeypots of information,” including Google (her example). 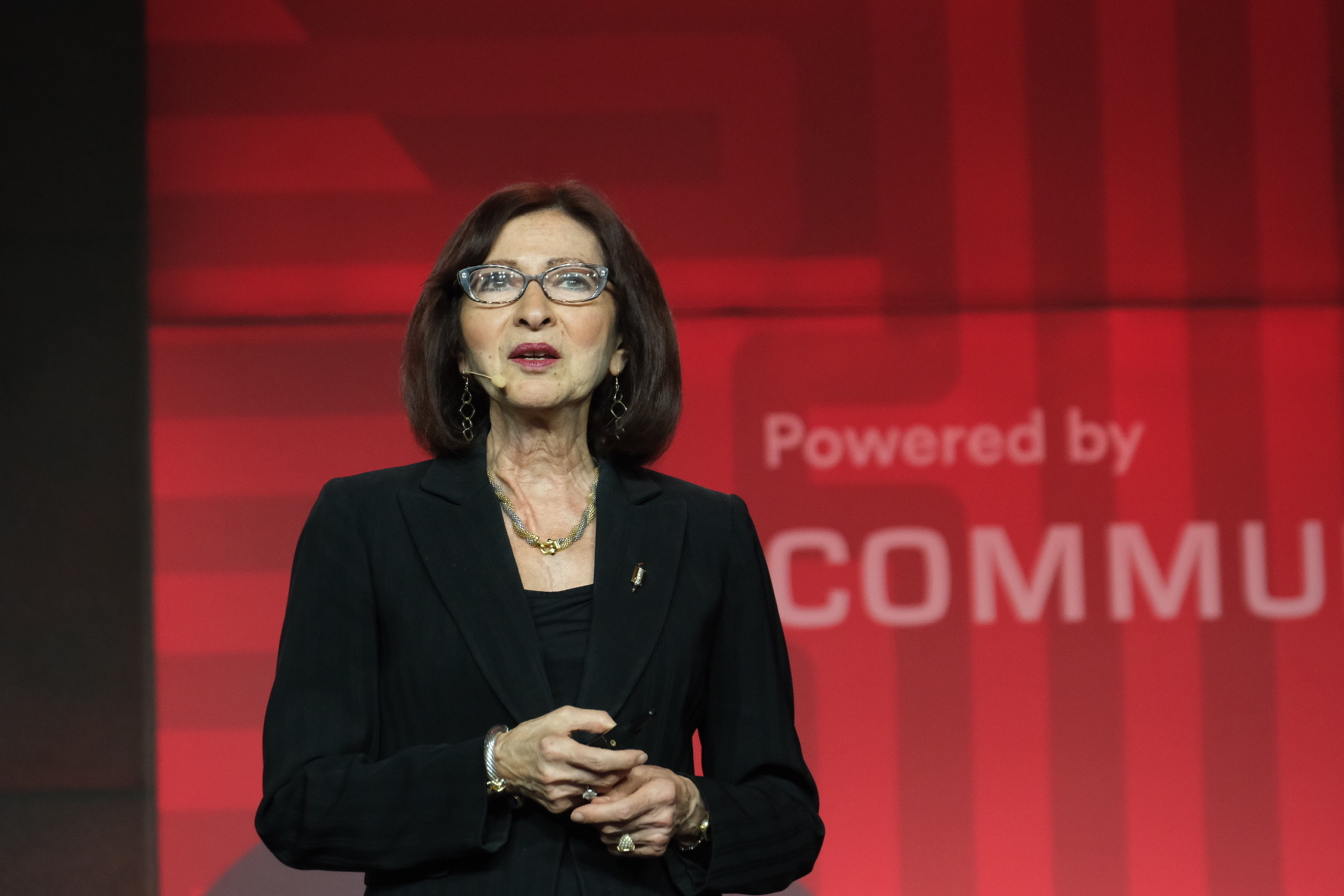 This centralization, she noted is a huge risk in terms of presenting opportunities for tracking, misuse, leaks and more. It’s “taking away our agency as individuals,” she said, and the solution is moving to true decentralization of data.

“Privacy […] is freedom, and is about you making decisions relating to your personal information; not the state, not corporations — you,” she said. “It’s not about secrecy, it’s about control [and] privacy is a necessary condition for societal well-being.”

Cavoukian wrapped her talk by noting the sheer volume of privacy breaches that have leaked consumer information to date, and about the importance of encryption in keeping this safe. Overall, her talk was a blueprint for tech companies looking to incorporate data privacy and good stewardship into the DNA of their products from day one.

Kelsey Leonard, Tribal Co-Lead on the Mid-Atlantic Regional Planning Body of the U.S. National Ocean Council, provided a talk on the implications of digital rights and the continued digital divide as it pertains to Indigenous communities globally. Leonard pointed out that Indigenous nations in North America are the least connected in the world, something she noted continues the ongoing colonialism, and even can potentially contribute to “ongoing genocide of Indigenous peoples.” 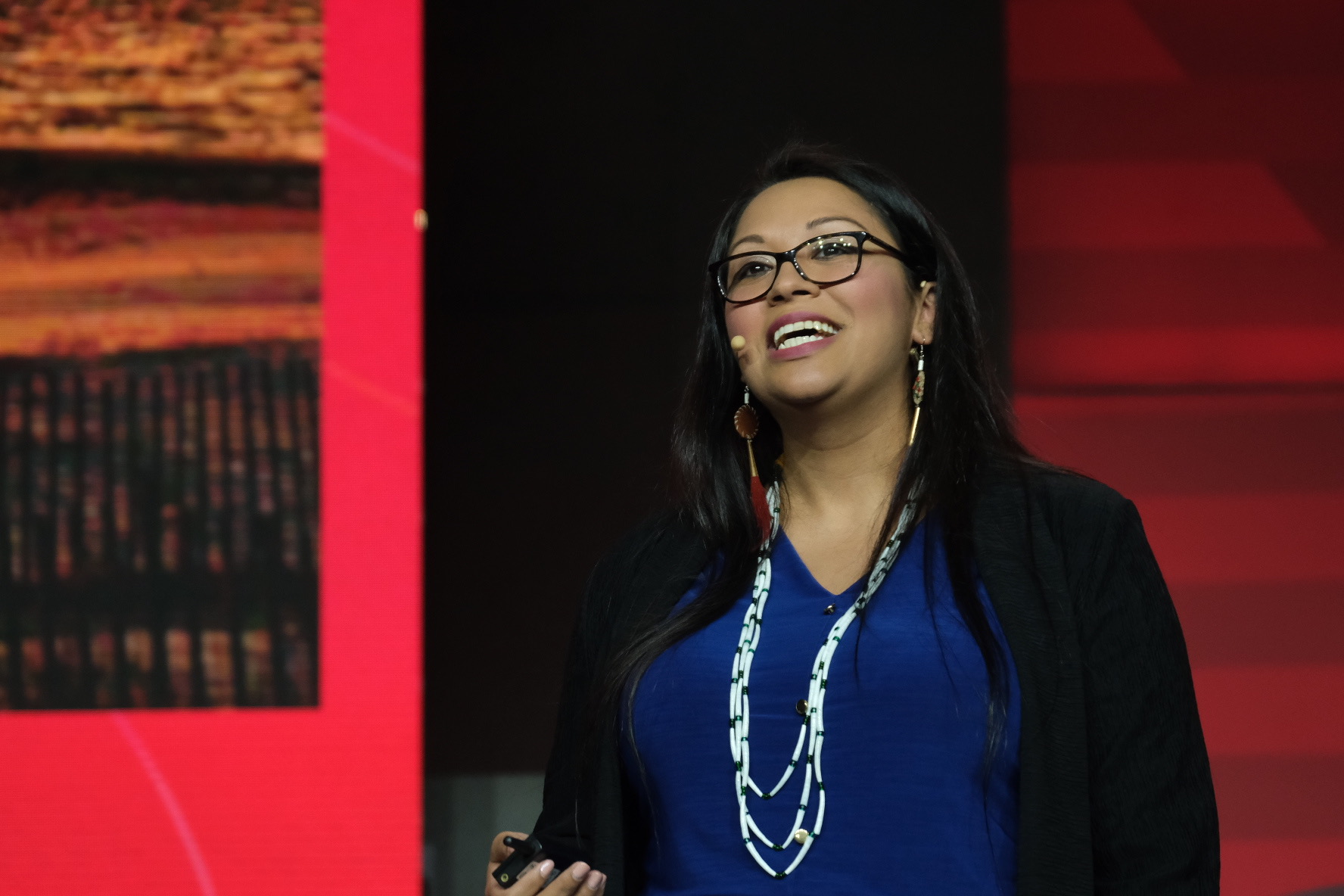 Indigenous people are also systematically disenfranchised from data ownership and data control, by virtue of their being left out of advanced STEM education and formalized degrees, she said. Leonard also noted that platforms contain reinforcement of what she calls “digital colonialism,” in that Indigenous names are often flagged as fake by algorithms designed to enforce real-name policies, and Indigenous languages are often mistranslated (specifically as Estonian, she said).

This worsens existing Indigenous language and culture erasure. Leonard said a language is lost every two weeks on average, according to recent research. What’s required then is to add protection measures specific to digital platforms to help counter this institutional digital colonization and enforce Indigenous Sovereign Data.

To close day one, Recode founder and legendary Silicon Valley reporter Kara Swisher summarized a lot of her recent work as a New York Times columnist. Basically, that means she called on the industry to stop messing around and start fixing stuff. 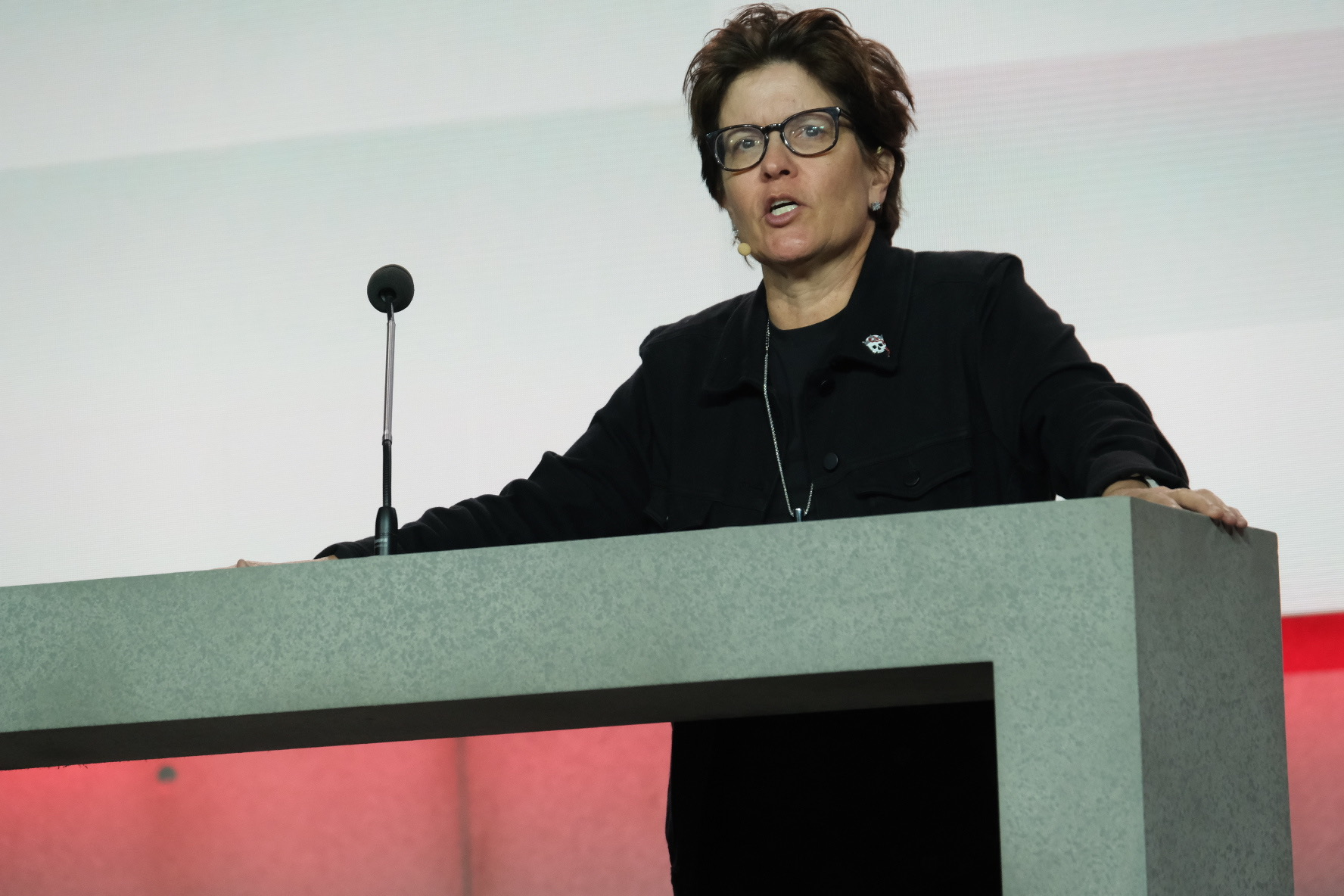 Swisher said we’re coming to a “reckoning” for tech in terms of media coverage, and the overwhelmingly positive coverage it’s received over the past many years. She emphasized that we’re only at the beginning of the impact technology will have on society, and laid out a number of current areas of innovation and investment that will continue to upset societal norms, including autonomous driving, artificial intelligence and more.

Regarding media specifically, Swisher noted that she marked a significant shift when BuzzFeed started A/B testing to amplify and extend the attention-capture possible around specific “news” items, citing the famous Katy Perry Left Shark incident of 2015. This, combined with our “continuous partial attention,” which is tied to our inability to totally disengage from our smartphones, is combining to have effects on how we think and work in the world, Swisher said.

She added that, today, many of her new big concerns are around AI, and that “everything that can be digitized will be digitized.” Not only that, she continued, but “almost everything can be,” which will be massively disruptive to peoples’ lives, with effects including a future where most people will have a very high number of different jobs over the course of their lives, requiring continuous education and retraining. “We have to think really hard about what good AI is and what problematic AI is,” she said. 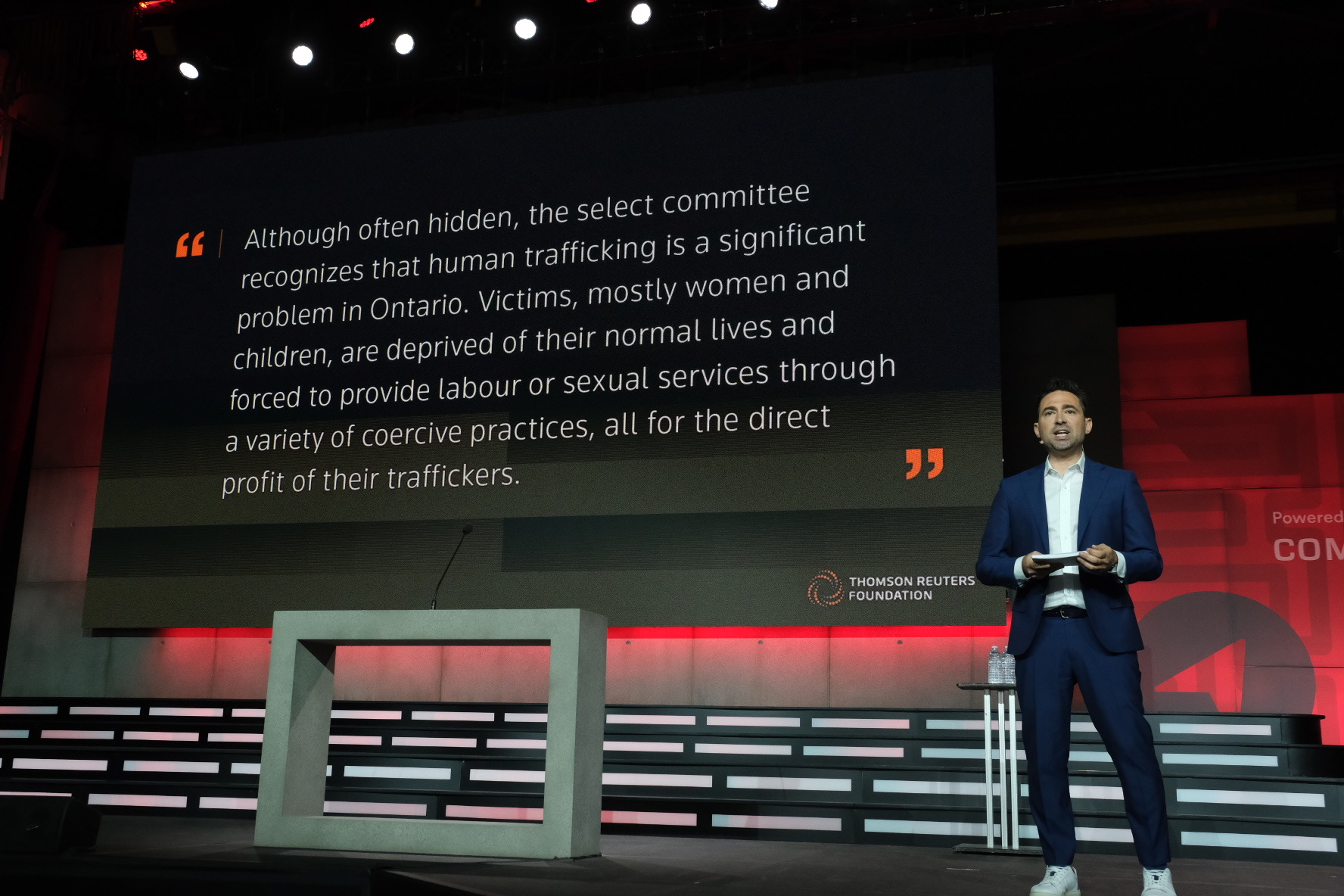 Across other stages, too, the themes of technology’s dangers and how to avert it prevailed across programming. Take Some Risk founder Duane Brown gave a talk on opting out of the always-connected lifestyle and becoming “digitally exhausted.” MedStack founder and CEO Balaji Gopalan talked about the risks inherent in dealing with private patient data in healthcare. Other topics included sustainable energy for Africa, using big data to counter human trafficking and ensuring we steer away from encouraging consumerization in this generation of connected kids.

The event’s central theme was the deceptively simple (and frankly over-uttered) phrase “tech for good,” but the programming and content revealed a level of sophistication and sincerity on the topic that exceeds the low bar often found in tech industry marketing materials and staged events. Overall, it felt introspective, contrite and contemplative — a self-reflection from a community genuine about shoring up its ethical shortcomings. In other words, refreshing.