Startup Battlefield is known around the world as TechCrunch’s premier startup competition, and today we’re proud to announce that on November 11-12 we are producing our hardware-focused competition, Hardware Battlefield at TC Shenzhen in that amazing heartland of hardware, Shenzhen, China.

The event this November will be TechCrunch’s fifth Hardware Battlefield, but our first ever in China. TechCrunch pioneered this hardware startup competition back in 2014 at CES in Las Vegas (the year Google acquired Nest!) and followed with more Hardware Battlefields in 2015, 2016 and 2017, all at CES. The 60 companies the editors chose to compete provided an incredible span of innovation — from smart socks for diabetics to food testing devices, to malaria diagnostic tools, to e-motorcycles and robotic arms.

Through those years we always had our eye on Shenzhen. The city offers an ecosystem like no other to support hardware startups through accelerators, rapid prototyping and world-class manufacturing. This year we worked with our partner in China, TechNode, to help us deliver on the dream. TC Hardware Battlefield 2019 will happen on November 11-12 and be a part of the larger TechCrunch Shenzhen show happening November 9-12. 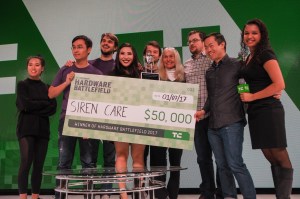 If you are the founder of an early-stage hardware startup anywhere in the world, please consider applying for this Hardware Battlefield, whether or not you’ve ever been to China or Shenzhen. The Hardware Battlefield pitch sessions will be judged by top VCs, founders and technologists from around the world. TechCrunch’s editors will closely cover the event. All the pitches onstage will be captured on video and published on TechCrunch, where they will be viewed by a global audience, and the Hardware Battlefield winner will take home a check for $25,000 as well as worldwide acclaim and membership in the Startup Battlefield elite. To date, the 857 Startup Battlefield contestants have racked up $8.9 billion in funding and 110 exits. And for those contestants who are new to Shenzhen, we’ll make sure you get the insider’s tour of how that amazing city operates to support hardware founders.

How does Hardware Battlefield work?

Apply. Submit applications here to be considered. Startups must have a minimally viable product that they can demo onstage. The product should have limited if any press coverage to date. Founders looking to launch their product onstage have an edge. Founders from any industry or country may apply as long as the product is a hardware device or component. TechCrunch’s editors will select an elite set of 10-15 hardware startups to pitch on the main stage. The application deadline is August 14.

Prepare. TechCrunch’s team will put the founders through a rigorous six-week training program to prep their pitches, products and presentations for the big day onstage.

Compete. Participants will have six minutes to pitch, including a live hardware demo, followed by an intensive Q&A from a panel of judges — accomplished VCs, founders and technologists.

What are you waiting for? Apply now. Launch your hardware startup on the world’s most famous tech stage, TechCrunch’s Hardware Battlefield at TC Shenzhen, this November.