There has been a longstanding gulf between the consumption of music and the creation of it: not everyone has the time or money to spend on lessons and instruments, and for those in school, many music education programs have been cut back over the years, making the option of learning to play instruments for free less common. Still others have had moments of interest but haven’t found the process of learning that easy.

Now we’re seeing a new wave of startups emerge that are attempting to tackle these issues with technology, creating tools and even new instruments that leverage smartphones and tablets, new hardware computing innovations and new software to make learning music more than just a pastime for a select few.

In the latest development, London startup Roli is launching a new interactive keyboard called the Lumi. Part colourful, sound-sensitive lightboard and part piano, the Lumi’s keys light up in a colorful array to help guide and teach you to play music. The 11-inch keyboard — which can be linked with one or two more of the same to add more octaves — comes with an iPad app that contains hundreds of pieces, and the two are now selling for $249 alongside a new Kickstarter to help drum up interest and offer early-bird discounts. The Kickstarter campaign blew through its modest £100,000 goal within a short while, and some of the smaller tiers of pledges are now sold out. The product will start shipping in October 2019, the company says. 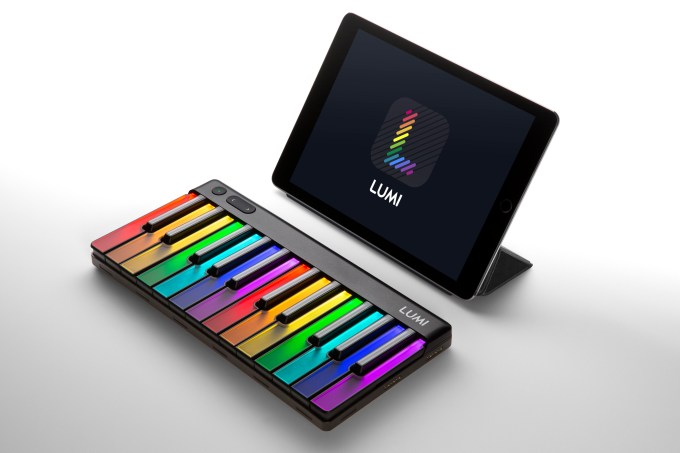 As you might already know, or have guessed by the reaction to the kickstarter, this is not Roli’s first rodeo: the company has made two other major products (and variations on those two) before this, also aimed at music making. First came the Seaboard, which Roli described as a new instrument when it first launched. Taking the form factor of a keyboard, it contained squishy keys that let the player bend notes and create other effects alongside electronic-based percussive tapping, as you would do with a normal keyboard.

Its next product was Blocks: small, modular light boards that also used colored light to guide your playing and help you create new and interesting sounds and beats with taps (and using a similarly squidgy surface to the Seaboard) and then mix them together.

Both of these were interesting, but somewhat aimed at those who were already familiar with playing pianos or other instruments, or with creating and playing electronic music with synthesizers, FX processors and mixers. (Case in point: the people I know who were most interested in these were my DJ friends and my kids, who both play the piano and are a little nerdy about these things.)

The Lumi is in a way a step back for Roli from trying to break new ground by conceiving of completely new instruments, with new form factors built with the benefits of technology and electronics in mind. But it’s also a step ahead: using a keyboard as the basis of the instrument, the Lumi is more familiar and therefore more accessible — with an accessible price of $249 to go along with that.

Lumi’s emergence comes after an interesting few years of growth for Roli. The company is one of the select few (and I think the only one making musical instruments) to be retailed in Apple stores, and it’s had endorsements from some very high-profile people, but that’s about as mainstream as it has been up to now.

The startup’s founder and CEO, American-born Roland Lamb, is probably best described as a polymath, someone who comes across less as a geeky and nervous or (at the other end) ultra-smooth-talking startup founder, and more like a calm-voiced thinker who has come out to talk to you in a break between reading and writing about the nature of music and teaching a small philosophy seminar.

His background also speaks to this unconventional manner. Before coming to found Roli, he lived in a Zen monastery, made his way around the world playing jazz piano, and studied Chinese and Sanskrit at Harvard and design at the Royal College of Art.

Roli has always been a little cagey about how much it has raised and from whom, but the list includes consumer electronics giants like Sony, specialist audio makers like Onkyo, the music giant Universal Music Group and VCs that include Founders Fund, Index and LocalGlobe, Kreos Capital, Horizons Ventures and more. It’s also partnered with a number of big names like Pharrell Williams (who is also an investor) in the effort to get its name out.

And while it has most definitely made a mark with a certain echelon of the music world — producers and those creating electronic music — it has not parlayed that into a wider global reputation or wider accessibility. After bringing out instruments more for a high-end audience, the Lumi seems like an attempt to do just that.

That seems to be coming at the right time. Services like Spotify and YouTube — and the rise of phones and internet usage in general — have transformed how we listen to music. We now have a much wider array of things to listen to whenever we want. On top of that, services like YouTube and SoundCloud furthermore are giving us a taste of creating our own music: using electronic devices, we can go beyond what might have been limitations up to now (for example, having never learned to play an instrument in the traditional sense) to get stuck into the craft itself.

The Lumi is also tapping into another important theme, and that is of music being “good for you.” There is a line of thought that says learning an instrument is good for your mind, both if you’re a younger person who is still in school or indeed out of school and looking to stay sharp. Others believe it has health benefits.

But realistically, these beliefs don’t get applied very often. Roli cites stats that say that only 10% of adults aged 18-29 have played an instrument in the past year, and of those that played as children, some 80% say they quit by age 14.

Putting this together with the Lumi, it seems that the aim is to hit a wider swathe of the market and bring in people who might want to learn something like playing an instrument but previously thought it would be too much of a challenge.

Roli isn’t the first — nor likely the last — company to reconsider how to learn playing the piano through technology. The Chinese company ONE Music Group makes both smart pianos with keyboards that light up, as well as a strip that you overlay on any keyboard, that also corresponds to an iPad app to learn to play piano.

An American startup called McCarthy Music also makes illuminated-key pianos, also subscribing to the principle that providing this kind of guidance to teach muscle memory is an important step in getting a student acquainted with playing on a keyboard.

The Lumi is notable not just because of its cost, but its size — the single, lightweight keyboards have a battery life of six hours and can fit in a backback.

That said, Roli is hoping there will be a double audience to these in the longer term, bridging the divide between music maker and listener, but also amateur and pro.

“Many people would love to play an instrument but worry that they don’t have the talent. Through our research, design, and innovation at ROLI, we’ve come to believe that the problem is not a lack of talent. Rather, instruments themselves are not smart enough,” said Lamb in a statement. “What excites me most is that the intelligence of LUMI means that there’s something in it for everyone. On one hand my own kids now prefer LUMI time to movie time. On the other hand, several of the world’s leading keyboard players can’t wait to use LUMI in the studio and on the stage.”