Love it or hate it, Microsoft’s PowerPoint is a ubiquitous tool in the corporate world. Over the course of the last few years, Microsoft started to bring some of its AI smarts to PowerPoint to help you design good-looking slides. Today, it’s launching a number of updates and new features that make this even easier. Even the best-designed presentation isn’t going to have much of an impact if you’re not a good public speaker. That’s a skill that takes a lot of practice to master, and to help you get better, Microsoft today also announced Presenter Coach for PowerPoint, a new AI tool that gives you feedback while you’re practicing your presentation in front of your computer. 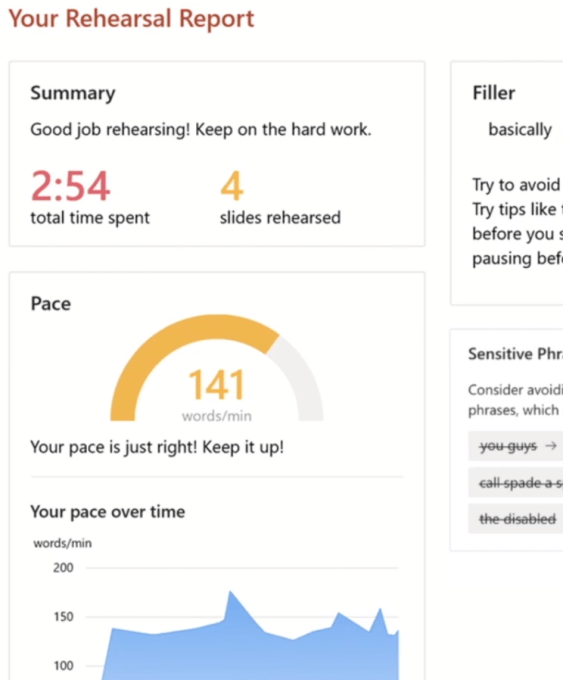 Microsoft’s AI can’t tell you if your jokes will land, of course, but the new coaching feature gives you real-time feedback on your pacing, for example, tells you whether you are using inclusive language and how many filler words you use. It also makes sure that you don’t commit the greatest sin of presenting: just reading the slides.

After your rehearsal session, PowerPoint will show you a dashboard with a summary of your performance and what to focus on to improve your skills.

This feature will first come to PowerPoint on the web and then later to the Office 365 desktop version.

As for the visual design, Microsoft today added new features like Designer theme ideas, which automatically recommends photos, styles and colors as you write your presentation. This feature is now rolling out for Office 365 subscribers on Windows, Mac and on the web.

If you work in a large corporation, then chances are you have to use your brand’s house style. With Designer for branded templates, companies can now define their brand guidelines and logos so that Design Ideas takes these into account as PowerPoint suggests new designs. This feature is now rolling out to Office 365 Insiders subscribers on Windows 10 and Mac.

No announcement is complete without some vanity metrics, of course, so today, Microsoft announced that PowerPoint users have now used Designer to create and keep 1 billion slides since it launched in 2016 (and surely, they created quite a few more but discarded them for various reasons). Hopefully, that means the world has seen fewer bad presentations in the last few years, and with today’s launch of the new coaching features, maybe that means we have to hear fewer bad presentations, too.