Following a string of trade restrictions from the U.S., China’s telecoms equipment and smartphone maker Huawei expects its revenues to drop $30 billion below forecast over the next two years, founder and chief executive Ren Zhengfei said Monday during a panel discussion at the company’s Shenzhen headquarters.

Huawei’s production will slow down in the next two years while revenues will hover around $100 billion this and next year, according to the executive. The firm’s overseas smartphone shipment is tipped to drop 40%, he said, confirming an earlier report from Bloomberg.

That said, Ren assured that Huawei’s output will be “rejuvenated” by the year 2021 after a period of adjustment.

Huawei’s challenges are multifaceted as the U.S. “entity list” bars it from procuring from American chip makers and using certain Android services, among a list of other restrictions. In response, the Chinese behemoth recently announced it has been preparing for years its own backup chips and an alternative smartphone operating system.

“We didn’t expect the U.S. to attack Huawei with such intense and determined effort. We are not only banned from providing targeted components but also from joining a lot of international organizations, collaborating with many universities, using anything with American components or even connecting to networks that use American parts,” said Ren at the panel.

The founder said these adverse circumstances, though greater than what he expected, would not prevent the company from making strides. “We are like a damaged plane that protected only its heart and fuel tank but not its appendages. Huawei will get tested by the adjustment period and through time. We will grow stronger as we make this step.” 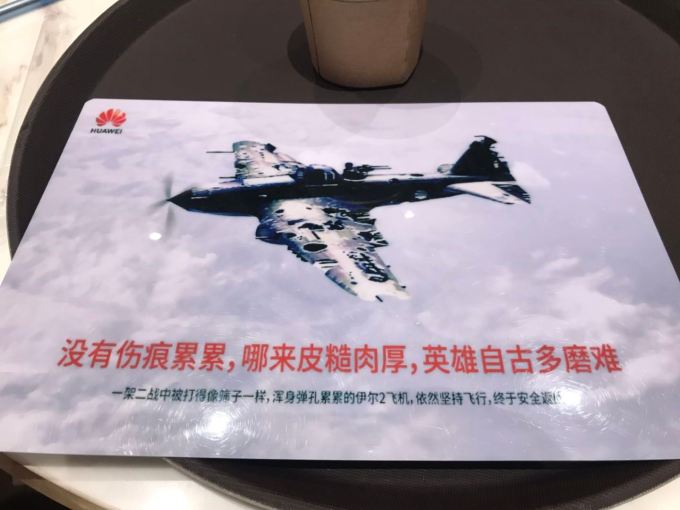 “Heroes in any times go through great challenges,” reads a placard left on a table at a Huawei campus cafe, featuring the image of a damaged World War II aircraft (Photo: TechCrunch)

That image of the beaten aircraft holding out during hard times is sticking to employees’ minds through little motivational placards distributed across the Huawei campus. TechCrunch was among a small group of journalists who spoke to Huawei staff about the current U.S.-China situation, and many of them shared Ren’s upbeat, resilient attitude.

“I’m very confident about the current situation,” said an employee who has been working at Huawei for five years and who couldn’t reveal his name as he wasn’t authorized to speak to the press. “And my confidence stems from the way our boss understands and anticipates the future.”

Although 74-year-old Ren had kept a quiet profile ever since founding Huawei, he has recently appeared more in front of media as his company is thrown under growing scrutiny from the west. That includes efforts like the Monday panel, which was dubbed “A Coffee With Ren” and known to be Ren’s first such fireside chat.

Speaking alongside George Gilder, an American writer and speaker on technology, and Nicholas Negroponte, co-founder of the MIT Media Lab, Ren said he believed in a more collaborative and open economy, which can result in greater mutual gains between countries.

“The west was the first to bring up the concept of economic globalization. It’s the right move. But there will be big waves rising from the process, and we must handle them with correct rather than radical measures,” said Ren.

“It’s the U.S. that will suffer from any effort to decouple,” argued Gilder. “I believe that we have a wonderful entrepreneurial energy, wonderful creativity and wonderful technology, but it’s always thrived with collaboration with other countries.”

“The U.S. is making a terrible mistake, first of all, picking on a company,” snapped Negroponte. “I come from a world where the interest isn’t so much about the trade, commerce or stock. We value knowledge and we want to build on the people before us. The only way this works is that people are open at the beginning… It’s not a competitive world in the early stages of science. [The world] benefits from collaboration.”

“This is an age for win-win games,” said one of the anonymous employees TechCrunch spoke to. He drew the example of network operator China Mobile, which recently announced to buy not just from Huawei but also from non-Chinese suppliers Nokia and Ericsson after it secured one of the first commercial licenses to deploy 5G networks in the country.

“I think the most important thing is that we focus on our work,” said Ocean Sun, who is tasked with integrating network services for Huawei clients. He argued that as employees, their job is to “be professional and provide the best solutions” to customers.

“I think the commercial war between China and the U.S. damages both,” suggested Zheng Xining, an engineer working on Huawei’s network services for Switzerland. “Donald Trump should think twice [about his decisions].”