The growing presence of encrypted communications apps makes a lot of communities safer and stronger. But the possibility of physical device seizure and government coercion is growing as well, which is why every such app should have some kind of self-destruct mode to protect its user and their contacts.

End to end encryption like that you see in Signal, WhatsApp and (if you opt into it) Facebook Messenger is great at preventing governments and other malicious actors from accessing your messages while they are in transit. But as with nearly all cybersecurity matters, physical access to either device or user or both changes things considerably.

For example, take this Hong Kong citizen who was forced to unlock their phone and reveal their followers and other messaging data to police. It’s one thing to do this with a court order to see if, say, a person was secretly cyberstalking someone in violation of a restraining order. It’s quite another to use as a dragnet for political dissidents.

@telegram @durov an HK citizen who runs a Telegram channel detained by the police was forced to unlock his phone and reveal his channel followers. Could you please add an option such that channel subscribers cannot be seen under extreme circumstances? Much appreciate. https://t.co/tj4UQztuZ2

This particular protestor ran a Telegram channel that had a number of followers. But it could just as easily be a Slack room for organizing a protest, or a Facebook group, or anything else. For groups under threat from oppressive government regimes it could be a disaster if the contents or contacts from any of these were revealed to the police.

There are already some dedicated “panic button” type apps, and Apple has thoughtfully developed an “emergency mode” (activated by hitting the power button five times quickly) that locks the phone to biometrics and will wipe it if it is not unlocked within a certain period of time. That’s effective against “Apple pickers” trying to steal a phone or during border or police stops where you don’t want to show ownership by unlocking the phone with your face.

Cybersecurity 101: Five settings to secure your iPhone or iPad

Those are useful and we need more like them — but secure messaging apps are a special case. So what should they do?

The best-case scenario, where you have all the time in the world and internet access, isn’t really an important one. You can always delete your account and data voluntarily. What needs work is deleting your account under pressure.

The next best-case scenario is that you have perhaps a few seconds or at most a minute to delete or otherwise protect your account. Signal is very good about this: The deletion option is front and center in the options screen, and you don’t have to input any data. WhatsApp and Telegram require you to put in your phone number, which is not ideal — fail to do this correctly and your data is retained. 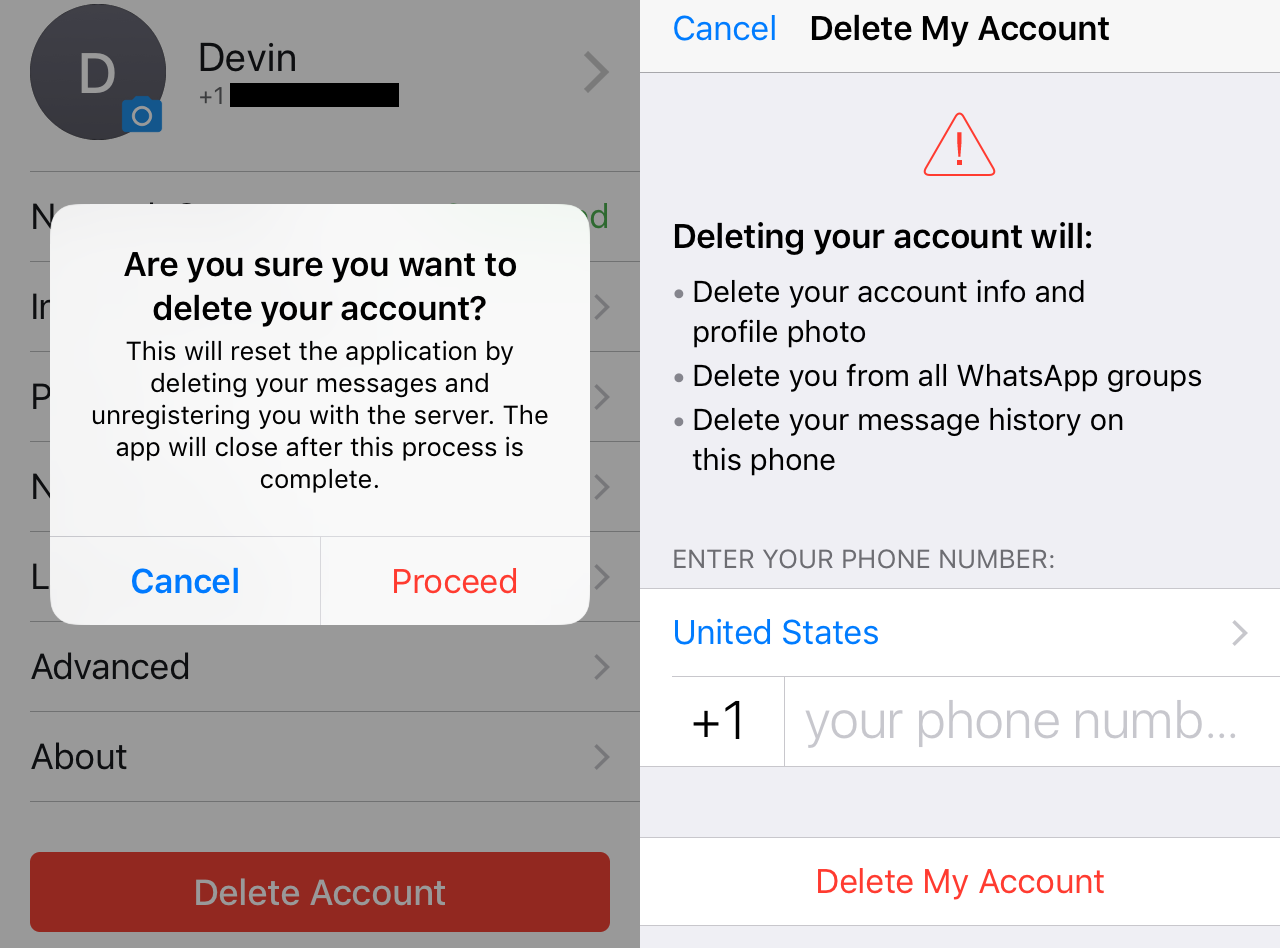 Signal, left, lets you get on with it. You’ll need to enter your number in WhatsApp (right) and Telegram.

Obviously it’s also important that these apps don’t let users accidentally and irreversibly delete their account. But perhaps there’s a middle road whereby you can temporarily lock it for a preset time period, after which it deletes itself if not unlocked manually. Telegram does have self-destructing accounts, but the shortest time you can delete after is a month.

What really needs improvement is emergency deletion when your phone is no longer in your control. This could be a case of device seizure by police, or perhaps being forced to unlock the phone after you have been arrested. Whatever the case, there need to be options for a user to delete their account outside the ordinary means.

Here are a couple options that could work:

Obviously these open new avenues for calamity and abuse as well, which is why they will need to be explained carefully and perhaps initially hidden in “advanced options” and the like. But overall I think we’ll be safer with them available.

Eventually these roles may be filled by dedicated apps or by the developers of the operating systems on which they run, but it makes sense for the most security-forward app class out there to be the first in the field.