Telegram, the most hyped ICO in the history of ICOs, is finally making its tokens available to retail investors through a limited listing that will precede a full sale later this year — but there are a lot of catches.

The messaging company, which serves as the de facto chat app for the crypto community, raised a record-high $1.7 billion last year through a token sale that was limited to accredited investors. The listing saw unprecedented demand despite a project which, some industry critics argued, recycled old ideas and proposed unmeetable goals.

Now its Gram token will go on sale to regular crypto buyers for the first time next month through a listing on crypto exchange Liquid on July 10. The arrangement is a limited offering before a full public sale in October, but the U.S, Korea and Japan are among countries where it will not be sold.

It’s notable that Liquid, which recently claimed to have raised funding at a $1 billion valuation, hasn’t struck a deal with Telegram directly. Instead, it has agreed to list an undisclosed number of tokens held by Gram Asia, an organization headquartered in Korea that claims to be the largest holder of Grams in Asia. For now, neither side is saying how many will be on offer and at what price.

Indeed, the press release announcing the deal includes no contribution from Telegram — there is, for example, no quote from its reclusive CEO Pavel Durov — and it sources two media reports to claim that Telegram’s beta program on its testnet is apparently working as planned.

That’s a pretty strange situation, even for the world of crypto, since it is convention for companies to endorse sales and partnerships.

“Unfortunately, that’s Telegram and how they have operated from the beginning,” Liquid CEO Kayamori told TechCrunch in an interview this week.

Despite that ominous radio silence, Kayamori assured us that this token listing is above board and very much part of the plan for TON — the ‘Telegram Open Network’ project that’s being developed by the funds raised through the ICO.

Kayamori said that TON is on track to make a full launch as early as October and that this partial listing from Gram Asia is part of that overall strategy.

Sure, that’s the rhetoric, but it is easy to assume other reasons behind the sale. Such as that Gram Asia is cashing in on anticipation of the full launch or, worse, that the group is dumping its tokens before a product.

Kayamori claimed that isn’t the case.

“A public sale was always planned for the window between the testnet launch and mainnet [full] launch,” he said. “They wanted to work with a regulated exchange to see how it goes before it gets listed [in full] in October.”

“Telegram already has an ecosystem, developers and early token buyers and TON ventures, there are already communities being built up. Based on discussions within these communities, GRAM Asia has put its best step forward to do this public sale,” Kayamori added.

The “regulated” part is important.

One of the reasons Telegram kept quiet during the token sale was to avoid running into legal problems, such as those that fellow chat app Kik is experiencing right now. That caused plenty of issues at the time — with scammers cashing in on demand and token buyers themselves left confused — and the approach means there are many caveats around the sale on Liquid.

Most notably, the Gram tokens will not be tradeable.

Buyers will essentially buy tokens from Gram Asia which, until the tokens are released in October, will be held in USDC — the stable coin backed by Coinbase among others. Only when the distribution process begins will the buyers receive their tokens, but the process itself will be divided into four tranches with one-quarter of the buyer’s tokens distributed every three months.

Kayamori conceded that there may be unofficial over the counter trading, but Liquid “can’t control” that. 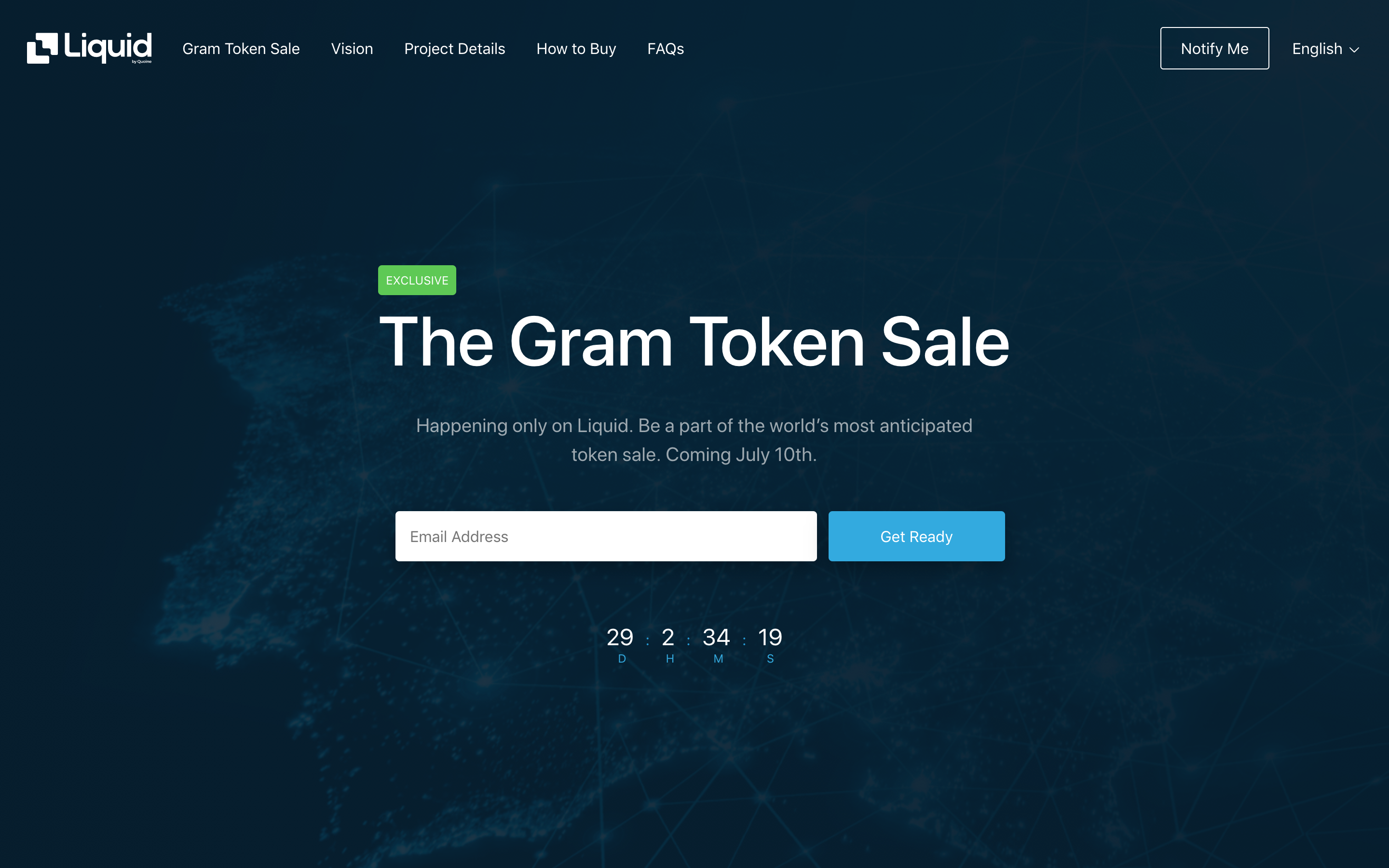 Liquid is betting that listing Telegram’s Gram tokens, even in small quantity, will boost its exchange

Then there are aggressive limits on who can buy.

The exchange will require rigorous KYC for prospective buyers, and there is a significant list of countries where Gram tokens will not be sold, and that includes the U.S. and Japan.

Kayamori said he is confident that there will be significant demand despite those restrictions. He explained there is the potential to add more tokens if the allocation — the size of which is not being shared — sells out.

Liquid doesn’t have anything like the volume of top exchanges Binance, OkEx and others that do more than $1 billion in trading daily — Coinmarketcap data ranks it 83rd with over $900 million traded over the last seven days — but it tries to stand out with a focus on regulation. That’s to say that it adheres to regulation in markets like Japan, the bet being that some companies will prefer that approach for their token sales or buying.

That’s worked in terms of this deal with Gram Asia, but it remains to be seen whether it can go from a splashy partnership to one that actually drives significant trading, user engagement and new sign-ups.

For Telegram, the Liquid listing will be an early but limited look at the market’s appetite for its token.