The long series of press conferences that marks the beginning of E3 is nearly at an end, with Square Enix the last to present, if you don’t count Nintendo tomorrow. The company leaned hard on nostalgia, piling remake upon remaster, but had a few surprises as well. Okay, maybe not “surprises,” but there was some good stuff.

The curtain rose, literally, on the title many gamers have been waiting on for years: the remake of RPG classic Final Fantasy VII. We saw a bit of this game in action last month, but this was much more comprehensive. 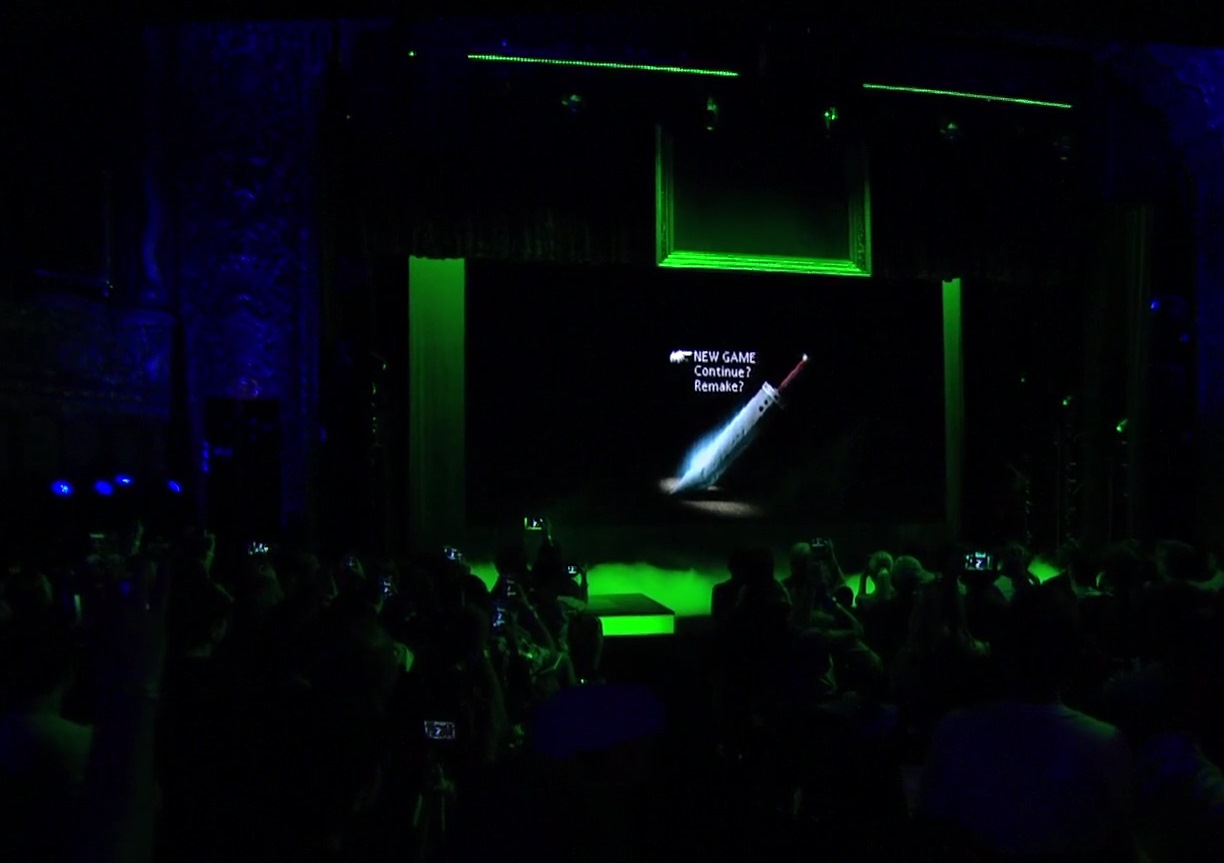 Yoshinori Kitase, producer of the title, speaking through a translator, thanked the crowd for their “support and patience over these years,” decades rather, during which fans never stopped clamoring for a remake. In fact, they clamored all the way through the whole on-stage demo.

The crowd went wild at the news that the game would cover two Blu-ray discs, each of which is of course many, may times the size of the original discs the game came from. The first chapter, set in the city of Midgar, has evolved to become a new game in its own right, he explained. 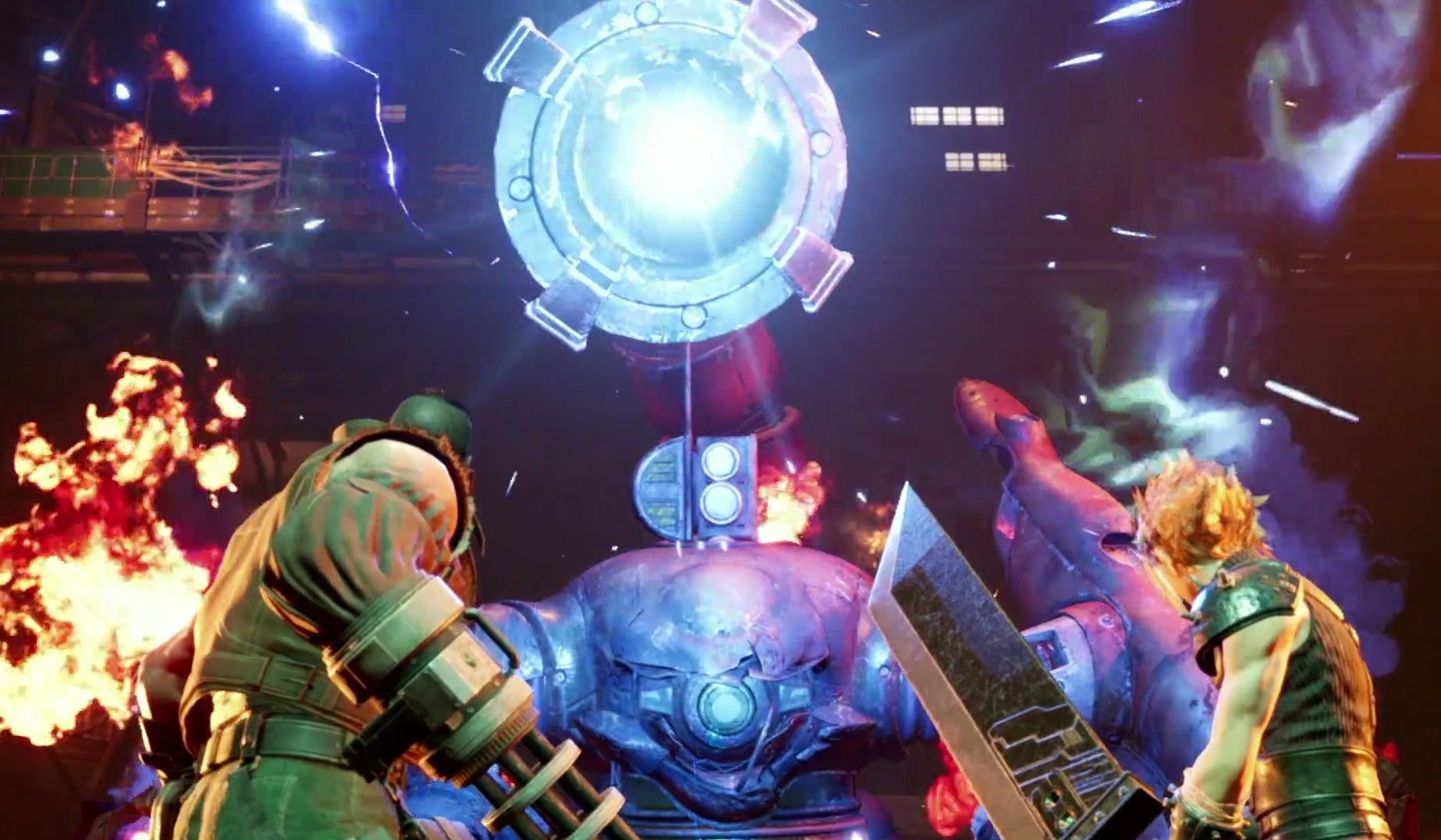 It has a combination of action and more traditional RPG mechanics — instead of turns you build up the ability to freeze time and take more tactical actions like using an item, casting spells, and so on. You’ll be able to switch between characters, of course, but this is definitely more in the line of XV than the original.

The game is playable at the Square Enix booth, which got everyone nice and riled up, especially seeing Tifa in action. You can watch the new, extended trailer below:

(Incidentally, the pre-order bonuses are ridiculous.)

Plugs for Life is Strange 2, Octopath Traveler, and remasters of FF Crystal Chronicles and the Last Remant followed. Then came Dragon Quest Builders 2 and DQ 11, which look as charming and fun as they have in months past. The Kingdom Hearts DLC Remind was shown off, and the expansion for Final Fantasy XIV as well. Two “celebrated classics” from the SaGa series got remastered. And the Final Fantasy VIII is also getting a much-deserved remaster, which is highly relevant to my interests.

As you can see, the presentation wasn’t exactly packed with surprises — but hey, Square Enix knows what its fans like, and honestly remakes and remasters are hot right now. But where’s my Final Fantasy Tactics?

One of the few new games we saw, top-down indie racing game called Circuit Superstars, looks like it could be a fun time when it comes out next year:

Final Fantasy Brave Exvius, one of the franchise’s mobile branches, is getting a sequel called War of the Visions — with a Game of Thrones-style introducing a variety of houses and their specialties. “Now in development.”

People Can Fly showed a cinematic trailer for a new IP called “Outriders” that could be cool, but it’s awfully hard to tell. It’s meant to be a strong narrative game with drop-in-drop-out multiplayer, but as they aren’t showing any gameplay yet. They’re a good studio (‘ll never forget Painkiller) so I’m sure they’ll make something interesting by the time the mid-2020 release date rolls around.

We got our best look yet at Oninaki, the action RPG from the creators of Lost Sphear and I Am Setsuna. Sure, it looks like something off the PlayStation 3, but so did the last two, and they were good.

A trailer for the new Avengers game from Crystal Dynamics received a warm welcome, though it was hard not to notice that the main characters were considerably different from the MCU versions. You won’t be controlling a virtual Chris Evans or Scarlett Johansson, sorry to say. This is the studio’s “unique take” on the team, which is fair, but coming as it does shortly after Endgame, a little disappointment is allowed.

The actors playing the characters in the game got a chance to introduce themselves and the complexities of their roles, which is certainly nice. Here’s hoping they have the chemistry the MCU team do — a short, dour clip of Banner arguing with Stark didn’t do much to convince, but the truth is Crystal Dynamics is good at characters and we should just let them do their thing.

The game itself looks good, a partly-online, story-driven thing with “no loot boxes” and every new area and character available for free. We’ll know more once we’ve played it at Square Enix’s booth. It’s coming out on everything but Switch in May of 2020, and PS4 users will get “early beta access” and some “unique benefits.”