Low code and no code are the latest industry buzzwords, but if vendors can truly abstract away the complexity of difficult tasks like building machine learning models, it could help mainstream technologies that are currently out of reach of most business users. That’s precisely what Microsoft is aiming to do with its latest Power Platform announcements today.

The company tried to bring that low-code simplicity to building applications last year when it announced PowerApps. Now it believes by combining PowerApps with Microsoft Flow and its new AI Builder tool, it can allow folks building apps with PowerApps to add a layer of intelligence very quickly.

It starts with having access to data sources, and the Data Connector tool gives users access to more than 250 data connectors. That includes Salesforce, Oracle and Adobe, as well as, of course, Microsoft services like Office 365 and Dynamics 365. Richard Riley, senior director for Power Platform marketing, says this is the foundation for pulling data into AI Builder.

“AI Builder is all about making it just as easy in a low-code, no-code way to go bring artificial intelligence and machine learning into your Power Apps, into Microsoft Flow, into the Common Data Service, into your data connectors, and so on,” Riley told TechCrunch. 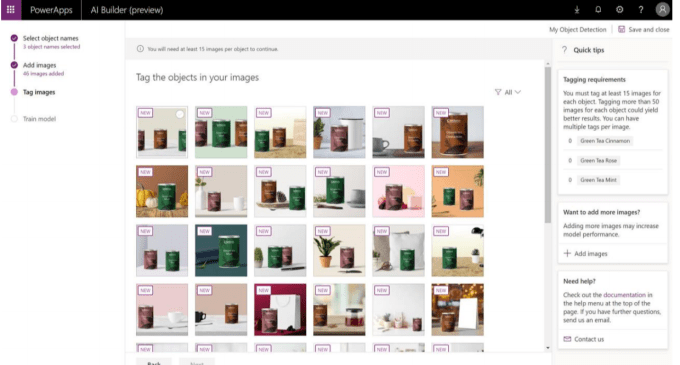 Charles Lamanna, general manager at Microsoft, says that Microsoft can do all the analysis and heavy lifting required to build a data model for you, removing a huge barrier to entry for business users. “The basic idea is that you can select any field in the Common Data Service and just say, ‘I want to predict this field.’ Then we’ll actually go look at historical records for that same table or entity to go predict [the results],” he explained. This could be used to predict if a customer will sign up for a credit card, if a customer is likely to churn, or if a loan would be approved, and so forth.

This announcement comes the same day that Salesforce announced it was buying Tableau for almost $16 billion, and days after Google bought Looker for $2.6 billion, and shows how powerful data can be in a business context, especially when providing a way to put that data to use, whether in the form of visualization or inside business applications.

While Microsoft admits AI Builder won’t be something everyone uses, they do see a kind of power user who might have been previously unable to approach this level of sophistication on their own, building apps and adding layers of intelligence without a heck of a lot of coding. If it works as advertised it will bring a level of simplicity to tasks that were previously well out of reach of business users without requiring a data scientist. Regardless, all of this activity shows data has become central to business, and vendors are going to build or buy to put it to work.