Assassin’s Creed Odyssey was definitely my favorite game of 2018, and it’s getting even better thanks to a couple of new updates Ubisoft announced at E3 this year that help make the most out of the game’s incredibly detailed depiction of a mythically massaged Ancient Greek setting.

Starting today via an open beta, players can get in on one of these new features — Story Creator Mode, which is a web-based way for anyone to design, build and share their own in-game story-based quests. That’s right: You’re the myth-maker now, with a quest-building mechanic that lets players choose from six kinds of quest objectives, including assassination of specific targets; rescuing individuals; visiting different locales throughout the world and more. You can write your own dialog, with branches that respond to player choices, and you can add options for in-dialog lying or even let the player go ahead and attack NPCs to end conversations.

All of these missions, once built, can be shared with other Assassin’s Creed Odyssey players regardless of platform — so if you’re playing on PS4, you can share missions to players on Xbox, for example, and vice versa. This whole feature makes me super excited, because I spent literally months creating campaigns in the original Starcraft’s campaign building tool, and I will do the same thing with this. Hmu if you want my missions. 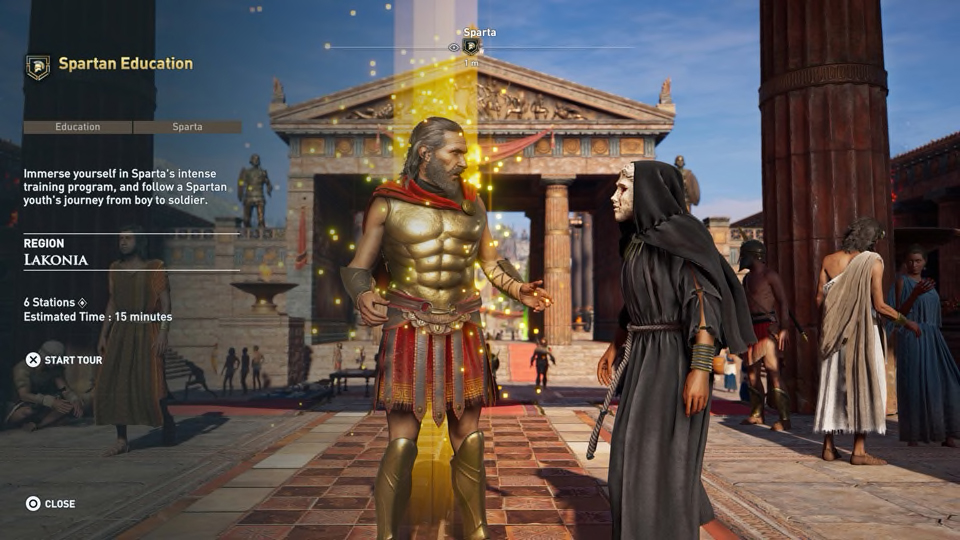 Meanwhile, players with less interest in creating something new, and more interest in visiting something that already exists to savor the details Ubisoft put in this game, can take advantage of the new Discovery Tour mode that’s coming later this fall. Basically it takes out any conflict elements and adds 300 guided tour stations, which provide details about Ancient Greek life, mythology, architecture and philosophy. The game’s dialog engine does double duty here to offer up interactive quizzes.

I like learning — who doesn’t like learning? This sounds great. But I’ll probably spend more time building campaigns than taking in the sites.