Walmart on Friday announced plans for a new, in-home grocery delivery service that would allow the retailer to deliver items directly to a customer’s fridge or freezer, even when the customer isn’t home. The service, called InHome Delivery, works by way of smart entry technology combined with proprietary cameras worn by the delivery associates that let the customer closely watch the delivery take place.

As Walmart explains, the goal is to make it easier to shop for groceries online. Unlike packages, fresh, cold and frozen groceries can’t be left on the doorstep for hours.

That means customers have to take care to schedule grocery delivery for times they are home — and that’s not always convenient, because they may get home late at night, or have a sleeping baby they don’t want to wake, or don’t know their upcoming schedule, among other reasons. Or perhaps they just don’t want to or have time to deal with having to shop and put groceries away.

Walmart’s service would give them an alternative.

To use the InHome service when it becomes available, Walmart customers will shop online for groceries as they would normally, and then select the “InHome Delivery” at checkout and a day they want their order to arrive. At the time of delivery, the Walmart associate will use a smart entry device and will wear a camera device that Walmart describes only as proprietary technology.

This means customers don’t have to buy their own security camera system to take advantage of the service, as they would with Amazon’s keyless entry system, Key by Amazon, which requires customers have an Amazon Cloud Cam and a smart lock.

Walmart has not yet disclosed what sort of “smart entry” technology will be required — only that customers will be able to purchase a supported lock from Walmart InHome’s website. The smart lock function will work by way of a mobile app.

Customers can also watch the video of the delivery on their phone. 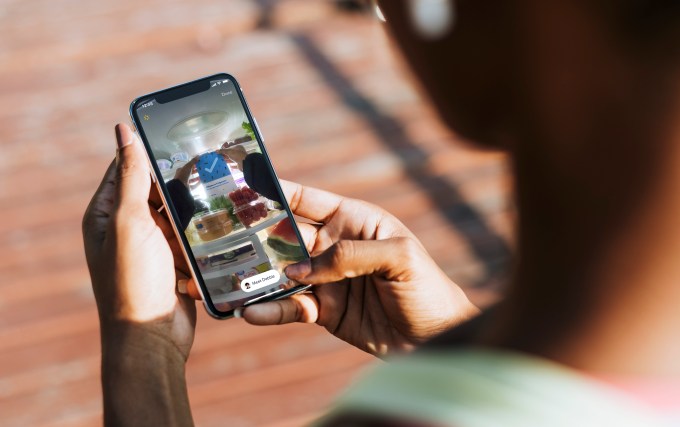 Above: Customer watching a delivery (mockup)

The service will initially launch this fall for more than 1 million customers across three cities: Kansas City, Missouri; Pittsburgh, Pennsylvania; and Vero Beach, Florida, says Walmart. It’s not detailing plans for a wider rollout at this time because — like many of Walmart’s new efforts — the company tests the technology and learns from feedback before deciding to make a service more broadly available.

This isn’t the first time that Walmart has tested keyless entry systems, however. The company in 2017 teamed up with smart lock maker August on a similar effort, where delivery pros could enter the home to drop off packages or put away cold groceries. Earlier this year, Walmart said the partnership with August had ended, related to Walmart’s ending of its work with delivery partner Deliv. However, it’s likely the retailer also learned from these earlier efforts that customers are undeniably anxious about allowing people into their homes when they’re not around. On this point, Walmart notes that the delivery personnel will be Walmart-trained associates — not delivery pros from a third-party, like Deliv. These associates will learn how to organize food in the refrigerator as well as how to “enter customers’ homes with the same care and respect with which they would treat a friend’s or family’s home,” says Walmart U.S. eCommerce CEO Marc Lore.

They’ll also have worked with a Walmart store for at least a year before being allowed to take a grocery delivery job.

Walmart is on track to offer grocery pickup in 3,100 stores and same-day grocery delivery from 1,600 stores by year-end, it says.

Its move to leverage its brick-and-mortar footprint with an early focus on grocery pickup has allowed the retailer to familiarize customers with the process of shopping online for groceries from Walmart.

Amazon, by comparison, doesn’t have a unified grocery solution. Instead, it offers AmazonFresh in some markets; Whole Foods pickup and delivery in others (but not all); and in some metros, customers can order from local grocers through Prime Now. The lack of cohesion could end up being an issue for Amazon, as it’s not directing customers to a single place for everything grocery, as Walmart does with grocery.walmart.com and its dedicated app.

Walmart’s InHome team is led by Bart Stein, who joined the retailer when it acquired his froyo startup Wim and team. At Walmart, he led Walmart’s Store No. 8 incubator effort called Project Franklin, now InHome. In five months, they had their first test ready — an example of how quickly Walmart is moving on its Amazon rivalry.

Walmart CEO Doug McMillon hinted that in-home delivery is only one aspect of simplifying online grocery that the company is addressing. Replenishment is another.

“What if we not only cover the last mile to customers’ homes but even the last few steps? What if we put their groceries away inside their kitchens or garages? And a step beyond that, what if they let us keep them replenished, keep them in stock, on the items they use all the time?,” he asked at the Walmart Shareholders meeting.

“Imagine keeping homes in stock like we do stores. Think of a pantry like a four-foot section,” said McMillon.