Zynga the casual games developer which once rode Facebook’s platform to popularity and riches is now turning its attention to Snap for growth.

A multiplayer shooting game first announced as part of the big unveiling of Snap Games in April, Tiny Royale’s likely aim is to bring the popular game format that has made Fortnite and PlayerUnknown’s Battlegrounds so successful to the Snap platform.

In the game, players can choose custom characters and form squads with friends or battle alone for quick two-minute rounds to gather loot and shoot their way to victory.

Up to 30 players can battle at a time in terms of up to four. The gameplay is much the same as the other battle royale games with maps shrinking in size until only one player, or team, remains, the company said. 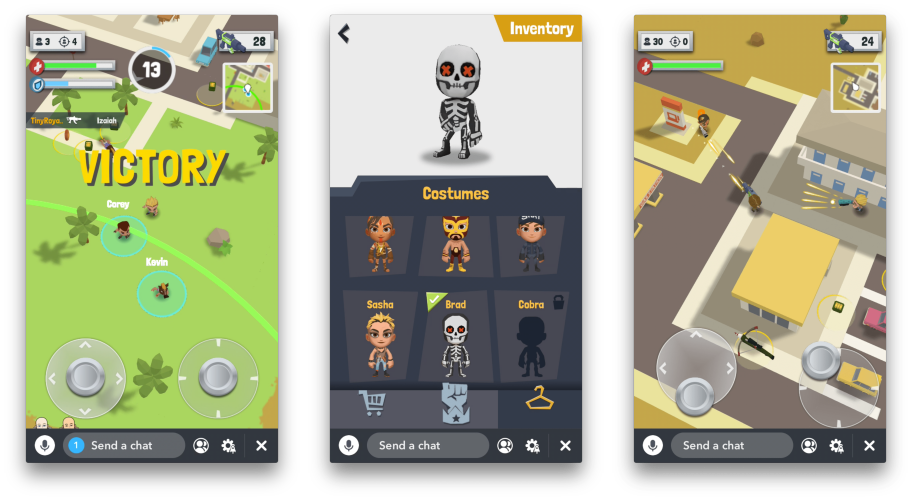 “We are thrilled to be one of the first companies to launch a gaming experience on Snapchat,” said Bernard Kim, president of Publishing at Zynga, in a statement. “Game developers rarely get the opportunity to create an entirely new experience on an emerging platform so our team was excited to remix the battle royale genre into a fast-paced game designed to rock on Snap Games.”

Built on the PlayCanvas game engine, Snap Games features a selection of third party titles. Players can access Tiny Royale through the Snapchat messaging feature and use text and voice-based features during game play. Later the summer, Zynga will offer a ranked matchmaking feature called Tiny Royale Leagues, which will place competitors in groups of 100, broken out into 20 tiers. Players can battle to climb up in tier ranks earning trophies and rewards based on their performance.

Snap launched in April with six announced titles including Tiny Royale and:

“Snap Games is all about exploring new ways for friends to play together and Tiny Royale™ is the perfect example of that,” said Will Wu, Snap’s Head of Snap Games. “We jumped at the chance to have a global leader in mobile games like Zynga develop for our platform, and we can’t wait to see what our community thinks about this new way to connect with each other.”