The Bentley Continental GT is iconic. The vehicle has long stood for excess and opulence, and I knew that going in. I expected the Continental GT to be over-engineered and capable of high-speed thrills. And it is, but there’s more.

The tester I’m driving costs $279,000. Of course it’s beautiful and fast and dripping with technology. It’s a Bentley. Inside and out, at high speed or low speed, the latest Continental GT exceeded all my expectations.

The machine glides over the road, powered by a mechanical symphony performing under the hood. The W12 engine is a dying breed, and it’s a shame. It’s stunning in its performance. This is a 200 mph vehicle, but I didn’t hit those speeds. What surprised me the most is that I didn’t need to go fast. The new Continental GT is thrilling in a way that doesn’t require speed. It’s like a great set of speakers or exclusive liquor. Quality over quantity, and in this mechanical form, the quality is stunning.

Bentley debuted the Continental GT in 2003 and has retained a familiar form over the years. Its mission has remained constant: To be the very best grand touring car available. It has held that crown on and off since 2003 as other cars entered the game. But with this latest revision, the crown has returned to Bentley. This is an astounding vehicle to take on a road trip. It’s like a private jet on the highway.

Under the long hood sits a massive W12 engine with twin turbos. The setup results in over 620 HP and 664-foot pounds of torque. And it knows how to translate those numbers to the pavement. The engine pounds not like a stack of Marshall amps at a Motorhead concert, but like a symphony playing Beethoven’s 5th with intensity.

The Bentley Continental GT performance is where it stands apart.

It glides as speeds reach illegal levels. There’s no drama from the transmission or argument from the engine. When the accelerator drops to the floor, a gateway opens in front of the Bentley, allowing it to transcend space and time as it exceeds posted speed limits.

The Bentley Continental GT lays out its power with the precision of an electric vehicle but the intensity of a street racer. The power delivery is unreal. Under normal driving modes, the transmission is hardly noticeable, and under strain of chasing a quarter mile, the shifts are barely noticeable as it arm wrestles the massive W12.

Driving the Bentley Continental GT is an exercise in restraint. At times, say, when coming out of a gnarly curve, you feel the need to slam the pedal to the floor and launch the car off the apex. But that would land you in jail. This is a car that could live its best life on a track, but it doesn’t need the track to be happy. Even driving the Continental GT to the golf course or office park is nearly a thrill.

The GT is just excellent. It inspires confidence and regal intrigue that’s often missing in many of its contemporaries. 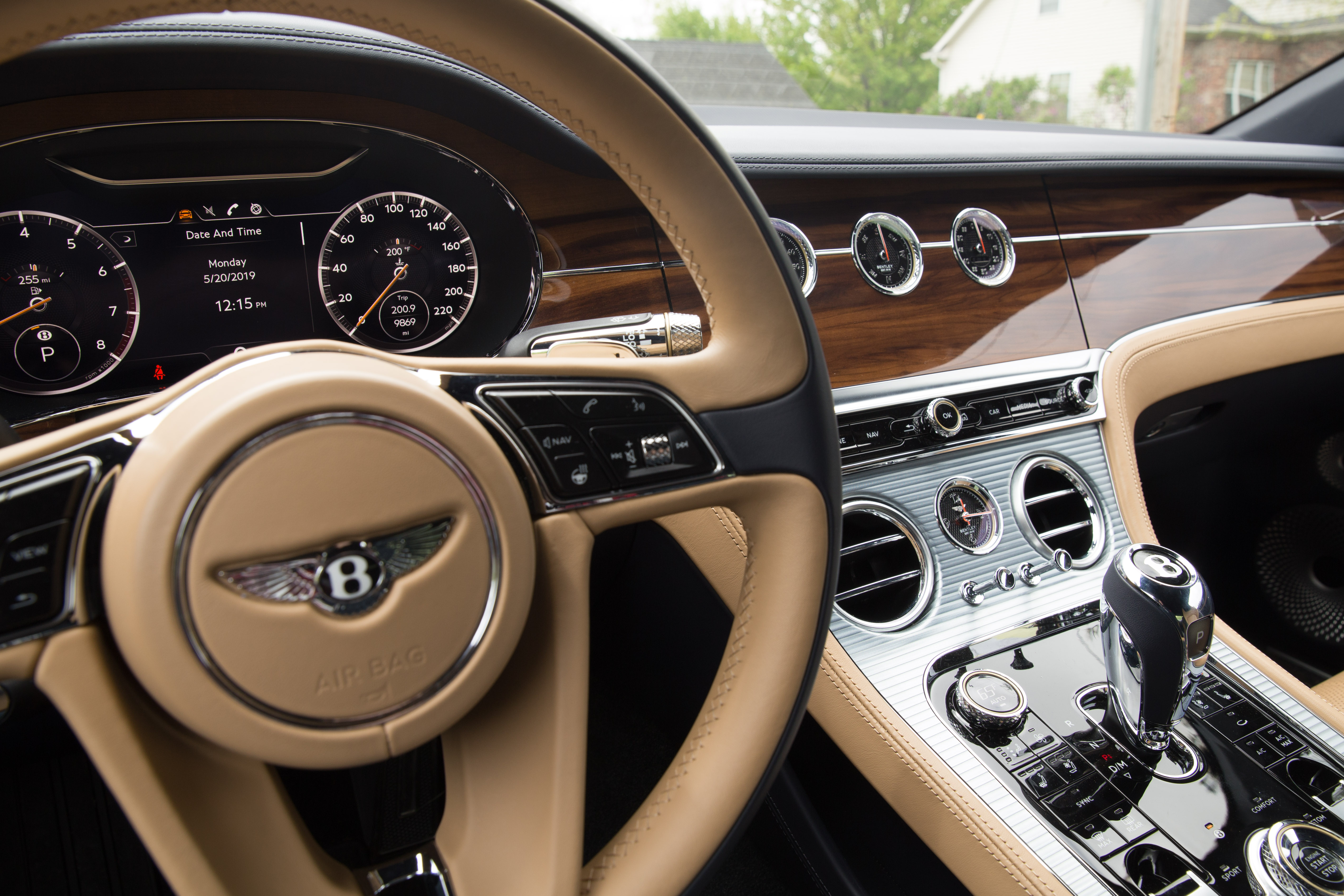 Entering the latest Continental is like sinking behind the controls of a fantasy rocket ship. Brushed metal adorns the center stack and handcrafted wood and leather wrap the cabin. Adorable metal pulls control the vents, and machined knobs perform various functions.

The leather is soft and the metal real. It’s the little things, too. The lume on the analog clock is fantastic and the wood grain matches throughout. The seats feature a lovely diamond pattern with multiple layers of embroidered detail. Don’t want to look at an LCD screen? Hit a button and it rotates away, revealing a set of three analog gauges in its place.

However, throughout the Continental GT, there are odd choices of material. Example: The gear shift is plastic and creaks like a well-used toy. It’s an odd choice for a substantial touchpoint. It feels cheap in comparison to gear shifters in other vehicles. BMW, for instance, is using manufactured crystal in its new large SUV, and it conveys a sense of stoutness missing in the Bentley.

Other plastic bits feel out of place. When sitting down, a bar extends from behind the seats, pushing the seatbelt within reach of the driver. It’s flimsy plastic. The handle on the outside feels loose. Even the key fob is underwhelming; I think the fob for my F-150 is more substantial.

I’m nitpicking, but the Bentley Continental GT costs north of $279,000.

The controls are familiar. The Bentley uses a lot of switch plates and instruments from Audi’s parts bin, though in the Bentley, they’re chrome. The Audi theme continues to the digital instrument cluster where it shares the same design as the one found in most Audis. Expect a similar experience throughout. This isn’t a bad thing. Audi has one of the best interfaces available throughout the industry.

The 2019 Bentley Continental GT is unforgettable. It’s a beautiful combination of obscene power and luxury materials.

I took delivery of this tester on the eve of a long weekend and spent as much time in it as I could. It’s more comfortable than my house. The seats are supple and supportive. The dash is impressive with its woodwork and analog dials. The power is intoxicating.

Cars like the Continental GT will likely continue to exist after electric vehicles become the norm. At least until the Earth runs out of oil. They have to. Cars like this will always be a luxury item. They have a soul that is missing from electric vehicles. There’s nothing like putting your foot down on a Bentley W12 and feeling the world come alive around you.