Analyst Canalys has updated its forecast of global smartphone shipments — saying it expects just 1.35 billion units to ship in 2019, a year-on-year decline of 3.1%.

This follows ongoing uncertainty around US-China trade talks and the presidential order signed by Trump last month barring US companies from using kit by Chinese device makers, including Huawei, on national security grounds — which led to reports that Google would withdraw supply of key Android services to Huawei.

“Due to the many uncertainties surrounding the US/China trade talks, the US Executive Order signed on 15 May and subsequent developments, Canalys has lowered its forecasts to reflect an uncertain future,” the analyst writes.

It says its forecast is based on the assumption that restrictions will be stringently applied to Huawei once a 90-day reprieve which was subsequently granted expires — the temporary licence run from May 20, 2019, through August 19, 2019 — making it difficult for the world’s second largest smartphone maker by sales to roll out new devices in the short term, especially outside China, even as it takes steps to mitigate the effect of component and service supply issues.

“Its overseas potential will be hampered for some time,” the analyst suggests. “The US and China may eventually reach a trade deal to alleviate the pressure on Huawei, but if and when this will happen is far from clear.”

“It is important to note that market uncertainty is clearly prompting vendors to accelerate certain strategies to minimize the short- and long-term impact in a challenging business environment, for example, shifting manufacturing to different countries to hedge against the risk of tariffs. But with recent US announcements on tariffs on goods from more countries, the industry will be dealing with turmoil for some time,” added Nicole Peng, Canalys VP, mobility, in a statement.

It expects other smartphone makers to seek to capitalize on short term opportunities created by the uncertainty hitting the Chinese tech giant, and predicts that South Korea’s Samsung will benefit the most — “thanks to its aggressive device strategy and its ability to quickly ramp up production”.

By 2020, it expects the market to have settled a little — with active contingency plans to be in place in major mobile supply chains and channels to “mitigate Huawei’s decline”, as well as gear up for 5G device rollouts.

Canalys takes the view that 5G and other hardware innovations will be positive drivers for consumer demand — expecting smartphone shipments to return to soft growth globally in 2020, rising 3.4% to 1.39BN, albeit with some subtle regional variations that it says will allow some to recover faster than others. 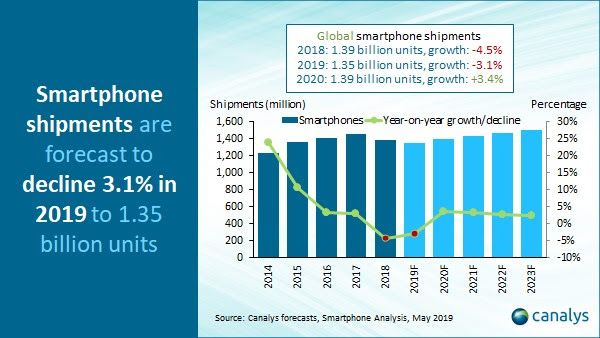