Today, Peloton is a bonafide success. The company, which sells $2,245 internet-connected exercise bikes, boasts a $4 billion valuation and a cult following.

That hasn’t always been the case. For years, Peloton battled for venture capital investment and struggled to attract buyers. Now that it’s proven the market for tech-enabled home exercise equipment and affiliated subscription products, a whole bunch of startups are chasing down the same customer segment.

Mirror, a New York-based company that sells $1,495 full-length mirrors that double as interactive home gyms, is closing in a round of funding expected to reach $36 million, sources and Delaware stock filings confirm, at a valuation just under $300 million. It’s unclear who has signed on to lead the round; we’ve heard a number of high-profile firms looked at Mirror’s books and passed. The company has previously raised a total of $38 million from Spark Capital, First Round Capital, Lerer Hippeau, BoxGroup and more.

Like Peloton, Mirror is sold for a hefty fee with a subscription to the service’s unlimited live and on-demand workouts that comes at an additional cost. The company hasn’t disclosed subscriber numbers, though The New York Times reported in February the business was selling $1 million worth of Mirrors — or some 650 units — per month.

The company has not only benefited from the Peloton effect, but also from a near-immediate interest from celebrities and influencers in its product. Kate Hudson, Alicia Keys, Reese Witherspoon, Jennifer Aniston and Gwyneth Paltrow are among the many celebrities to have publicly boasted about Mirror, undoubtedly boosting sales for the up-and-coming startup.

Venture capitalists were quick to show support for Mirror, too; in fact, the business attracted money at a $200 million valuation prior to launching its first product. Mirror began selling its sleek equipment, dubbed by The New York Times as “The Most Narcissistic Exercise Equipment Ever,” in September. 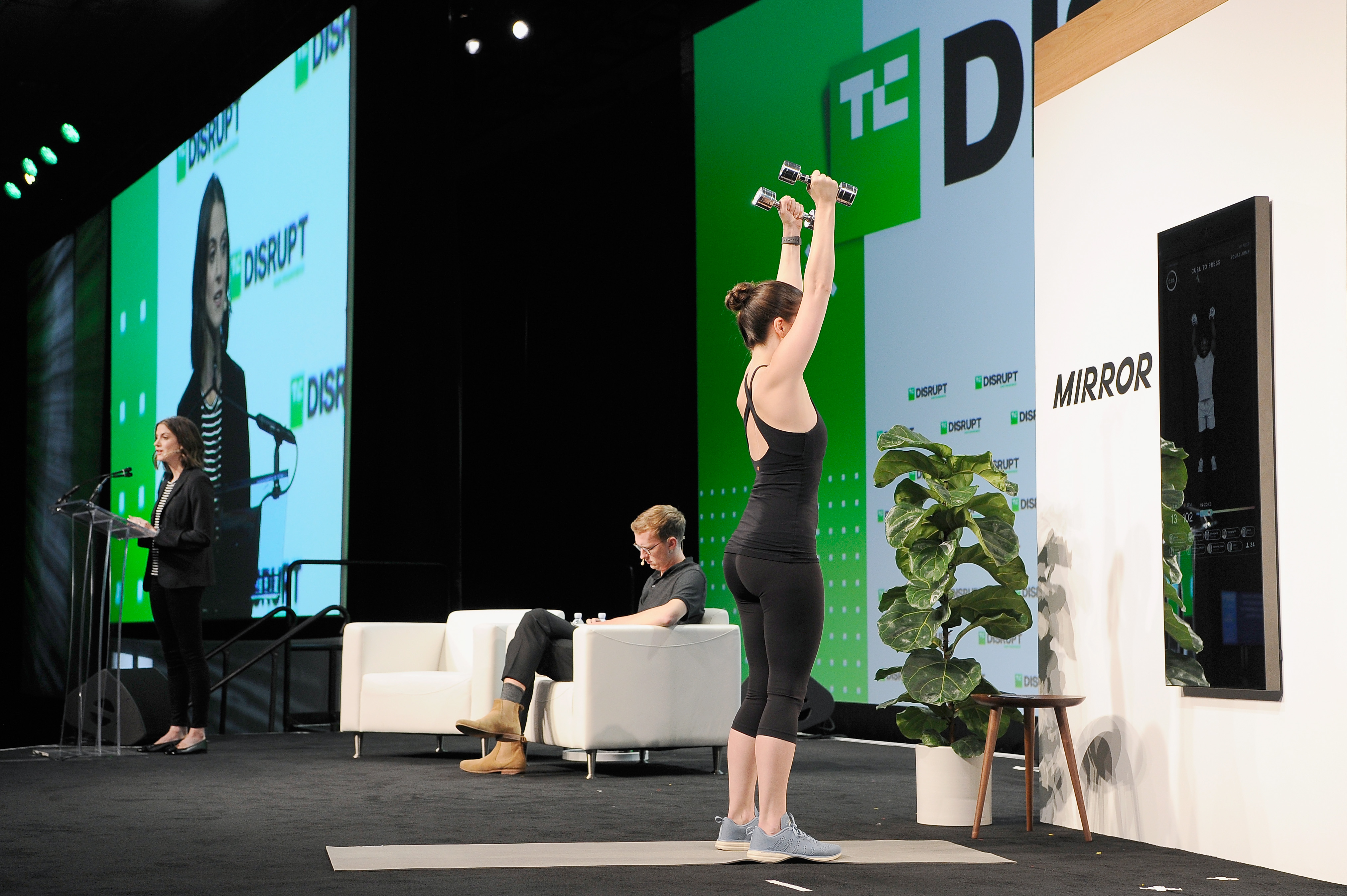 The round comes amid a distinct boom in funding for fitness-related startups evidenced not only by Peloton’s mammoth valuation and hyped-over initial public offering expected soon but by the rapid uptick in small upstarts looking to capitalize on rising interest in fitness apps and equipment. In total, VCs bet some $2 billion on U.S. fitness startups in 2018, a record amount of funding for the space. So far this year, nearly $500 million has been allocated to the growing sector, per PitchBook, as entrepreneurs strive to bring the gym into the home.

Tonal, which sells personal exercise equipment that combines on-demand training with smart features, is among a small class of venture-backed fitness companies to have accumulated a large following. The company has raised $91.7 million in equity funding at a valuation of $185 million, according to PitchBook, from investors including L Catterton, Shasta Ventures, Mayfield and Sapphire Sport.

When it comes to early-stage efforts, there’s no shortage of recent fundraises. Last week, Livekick, which gives customers access to one-on-one personal training and yoga from their home, closed a $3 million seed round led by Firstime VC. Two weeks ago, fitness startup Future secured an $8.5 million round led by Kleiner Perkins’ Mamoon Hamid. For a $150 monthly fee, Future assigns personalized workout plans and a coach who tracks customers’ fitness activity through an Apple Watch. To keep users committed to their workout regimens, Future sends daily text messages with motivational feedback.

Mirror was founded in late 2016 by Brynn Putnam, an entrepreneur behind Refine Method, a chain of boutique fitness studios located in New York. The former professional dancer spoke to TechCrunch’s Lucas Matney at Disrupt San Francisco in September about the future of the business.

“We have the ability to create personalized premium content across a wide range of verticals, with fitness being our first vertical,” Putnam said.