Apple’s iOS 13 is getting a dark mode, the company announced today at its Worldwide Developers Conference in San Jose. Confirming an earlier leak, the new dark mode will be system-wide and can be turned on or off from iOS’s Settings or through a new Control Center toggle. Once enabled, Dark Mode will change the color of the Home screen dock, the background colors of iOS screens, and Apple’s built-in apps like Apple Music, Notes, Messages, Photos, Calendar, Music and more.

Other system features have also been prepped for Dark Mode like the dock and share sheet, so it’s a seamless experience.

Meanwhile, Apple iOS developers will be able to customize their own apps for Dark Mode by way of Apple’s newly announced framework, SwiftUI, also announced today.

Dark themes for apps have become fairly popular, thanks to the rise of OLED smartphones in recent years. Because a dark mode lights up fewer pixels, it can help conserve battery life on phones’ OLED screens. Dark themes may have other benefits as well, in terms of decreasing device addiction and improving sleep, some claim.

Apple is not the first to launch a system-wide dark mode, however. At Google’s developer conference in May, the company introduced Dark Theme for Android Q which will work across its mobile OS and in first-party Android apps, with developers able to code for it in their own applications.

Below is the leaked image of Dark Mode for comparison: 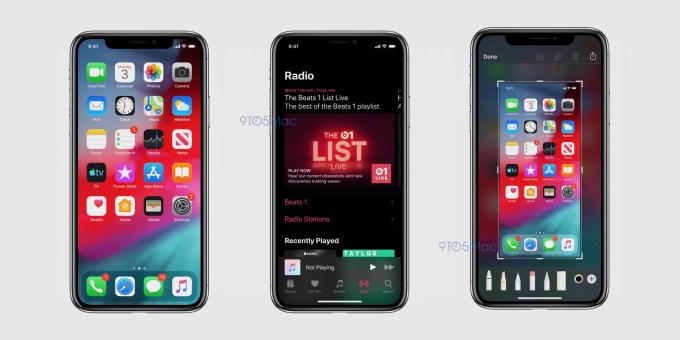