Uber is now requiring the same good behavior from riders that it has long expected from its drivers. Uber riders have always had ratings, but they were never really at risk of deactivation — until now. Starting today, riders in the U.S. and Canada are now at risk of deactivation if their rating falls significantly below a city’s average.

“Respect is a two-way street, and so is accountability,” Uber Head of Safety Brand and Initiatives Kate Parker wrote in a blog post. “Drivers have long been required to meet a minimum rating threshold which can vary city to city. While we expect only a small number of riders to ultimately be impacted by ratings-based deactivations, it’s the right thing to do.”

For drivers, they face a risk of deactivation if they fall below 4.6, according to leaked documents from 2015. Though, average ratings are city-specific. Uber, however, is not disclosing the average rider rating, but says “any rider at risk of losing access will receive several notifications and opportunities to improve his or her rating,” an Uber spokesperson told TechCrunch.

For example, Uber will offer tips to riders around encouraging polite behavior and keeping the car clean.

“Ultimately, we expect this to impact only a very small number of riders,” the spokesperson said.

This is part of Uber’s refreshed community guidelines, which will appear front and center on the Uber app and require confirmation of acknowledgment.

“Holding riders accountable for their behavior on the Uber platform is an important safety measure to protect drivers as well as fellow riders who may book shared rides,” Moira Muntz, spokesperson for the Independent Drivers Guild, said in a statement. “While most riders are respectful, banning riders who threaten driver safety, spew racist rants, and disrespect or damage our vehicles is the right thing to do. For too long there has been one-sided accountability and this is a positive step toward correcting that.” 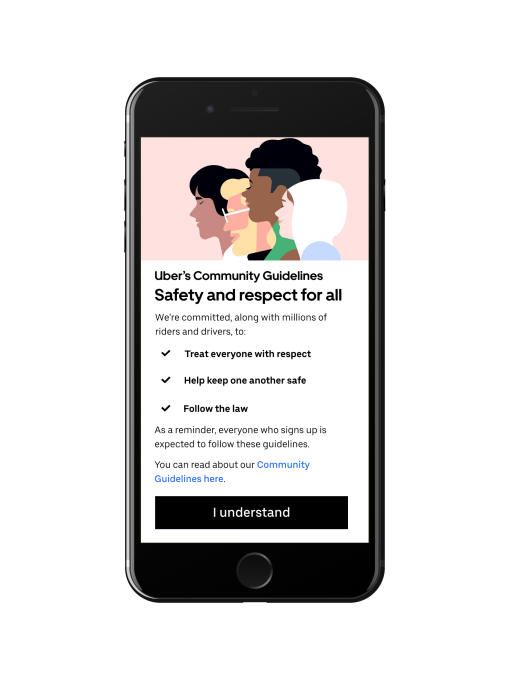