Logz.io announced a $52 million Series D investment today. The round was led by General Catalyst.

Other investors participating in the round included OpenView Ventures, 83North, Giza Venture Capital, Vintage Investment Partners, Greenspring Associates and Next47. Today’s investment brings the total raised to nearly $100 million, according to Crunchbase data.

Logz.io is a company built on top of the open-source tools Elasticsearch, Logstash and Kibana (collectively known by the acronym ELK) and Grafana. It’s taking those tools in a typical open-source business approach, packaging them up and offering them as a service. This approach enables large organizations to take advantage of these tools without having to deal with the raw open-source projects.

The company’s solutions intelligently scan logs looking for anomalies. When it finds them, it surfaces the problem and informs IT or security, depending on the scenario, using a tool like PagerDuty. This area of the market has been dominated in recent years by vendors like Splunk and Sumo Logic, but company founder and CEO Tomer Levy saw a chance to disrupt that space by packaging a set of open-source logging tools that were rapidly increasing in popularity. They believed they could build on that growing popularity, while solving a pain point the founders had actually experienced in previous positions, which is always a good starting point for a startup idea. 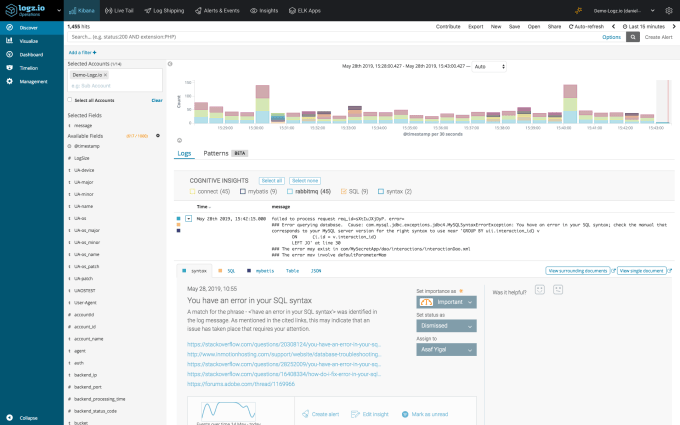 “We saw that the majority of the market is actually using open source. So we said, we want to solve this problem, a problem we have faced in the past and didn’t have a solution. What we’re going to do is we’re going to provide you with an easy-to-use cloud service that is offering an open-source compatible solution,” Levy explained. In other words, they wanted to build on that open-source idea, but offer it in a form that was easier to consume.

Larry Bohn, who is leading the investment for General Catalyst, says that his firm liked the idea of a company building on top of open source because it provides a built-in community of developers to drive the startup’s growth — and it appears to be working. “The numbers here were staggering in terms of how quickly people were adopting this and how quickly it was growing. It was very clear to us that the company was enjoying great success without much of a commercial orientation,” Bohn explained.

In fact, Logz.io already has 700 customers, including large names like Schneider Electric, The Economist and British Airways. The company has 175 employees today, but Levy says they expect to grow that by 250 by the end of this year, as they use this money to accelerate their overall growth.