After visiting Star Wars: Galaxy’s Edge several months ago to report on how it was built, I came back on the eve of it opening to the public to try out its first marquee attraction: flying the Millennium Falcon.

Well, I flew it, and it was good. Real good. This ride is for everyone who dreamed of piloting the Falcon more than they dreamed about holding a lightsaber. This ride is for every person that rode Star Tours shuttle and gripped the slightly up-turned handles wishing hard that they could fly it. It’s a quintessential part of the Star Wars universe made flesh. 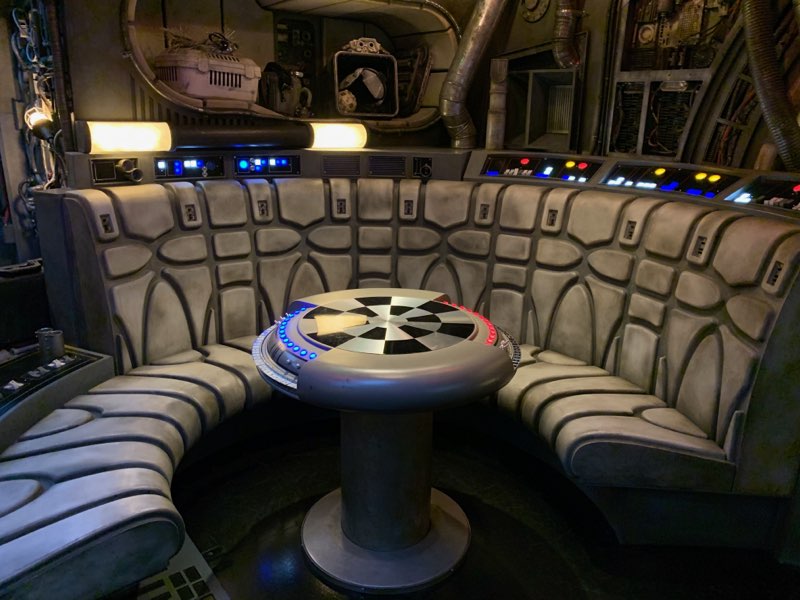 It’s clever, incredibly well art-directed and absolutely smoothly operational. The ride offers a thrilling group experience that will foster shouting and interaction in the cockpit just as we’ve seen in the movies. It will very likely also breed some post-flight posturing or trash-talking depending on how each individual performs their tasks.

The scene setting and queue for the Falcon is pitch perfect. You walk by the ship itself and through a queue that is populated with all the artifacts of an active smuggling operation inside a well-worn, lived-in hangar. As you go through the line you are presented with multiple views of the falcon itself, making utilization of the 100-foot ship.

A cast member will hand you a boarding card with your preferred role on it, identified by color. 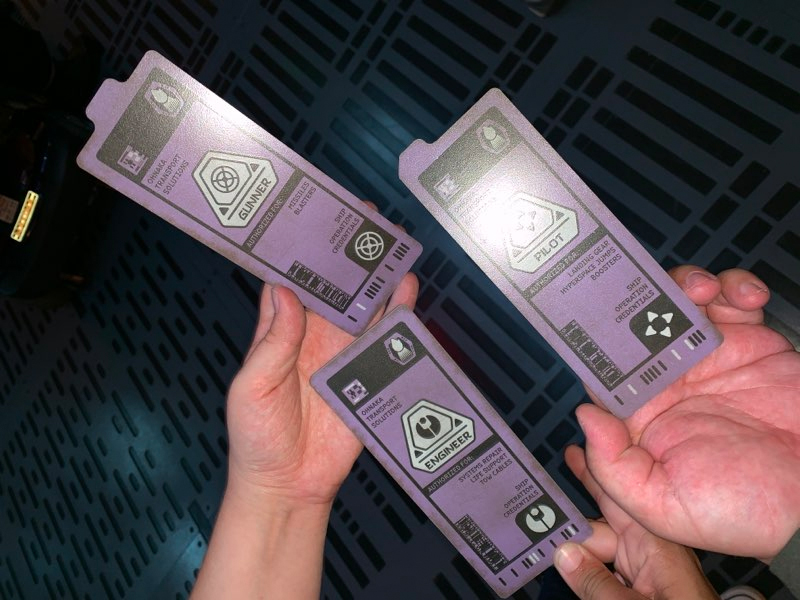 Eventually you enter the insanely familiar chiclet corridor and board the ship. The reveal of the hold with its Dejarik board (not functional but you can sit there and take pics) and a ton of other super accurate details is your next treat. This is where your colored boarding card gets handed in and you board a cockpit through one of two tunnels.

After a quick briefing from Hondo Ohnaka it’s time to enter the cockpit and, friends, the impact is real. It’s the cockpit as you imagined it, only right in your face and extremely tactile. I talked about this before, but the toggles feel right, the levers feel right.

Technologically speaking, the Falcon is a beast of an operation.

In my piece previewing Galaxy’s Edge a few months ago, I mentioned some technical details about the way the ride works. It’s a simulator with multiple cockpits, loaded with six people in two batches at a time. There are two pilots, two gunners and two engineers. You share responsibility for how the Falcon completes its mission. You’ll always get home, but the ship may be more or less damaged and each person gets a rating that translates into your “share” of galactic credits.

Here are some details from my earlier piece: 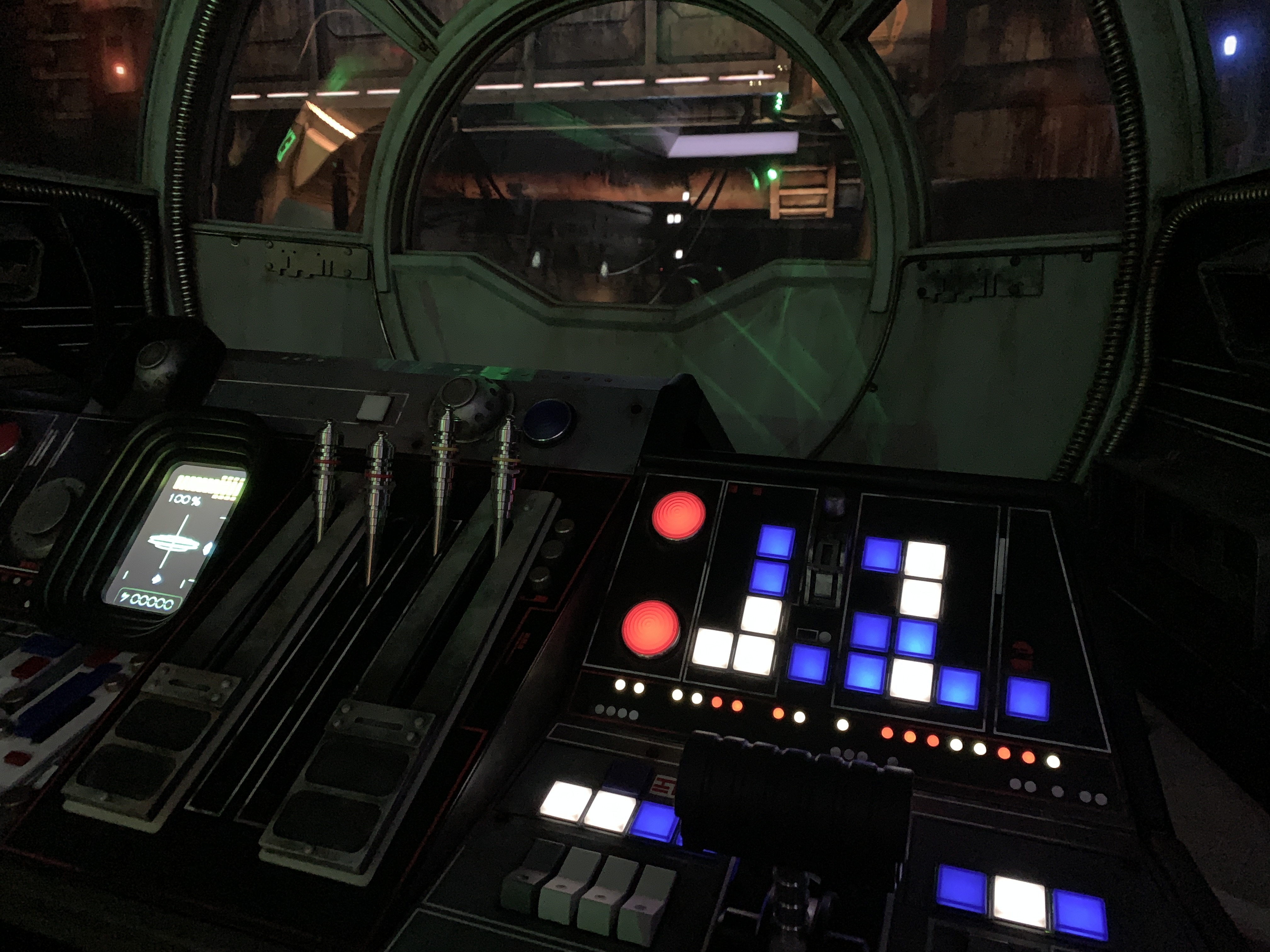 In action, the work has paid off. This is an insanely involved simulator ride handling a bunch of inputs at once.

I have to say, though, it tickles me pink that Disney spent billions building what reminds me a heck of a lot of a Star Wars version of Spaceteam.

Yes, you can play it in isolation, taking care of your role and that’s it, but just a couple minutes into my flight I was yelling at our (terrible) pilots to go left or right or up or down and the engineers were hollering at my fellow gunner and I to shoot things. If you let yourself get into it, you’re going to have a good time. And there are absolutely cases for multiple runs at this thing; it’s not a one-and-done ride. Different roles, different modes (there is a semi-secret manual gunnery mode you trigger right at the beginning of the ride if you’re quick) and what Disney promises are ongoing stories that will be installed in the ride make it a long-term investment.

The controls are responsive, but not “twitch-style.” If you’ve played an advanced space simulator then you know that the scale of everything affects your sense of speed — that’s present here too. The Falcon isn’t a ship that goes snicker snack from one heading to another, it arcs and swerves. This makes moving up and down floatier than flying a tiny fighter might be, but it doesn’t take long to get used to it. I hit maybe two or three things on my pilot flight, where my earlier flight impacted maybe 15 or so times. 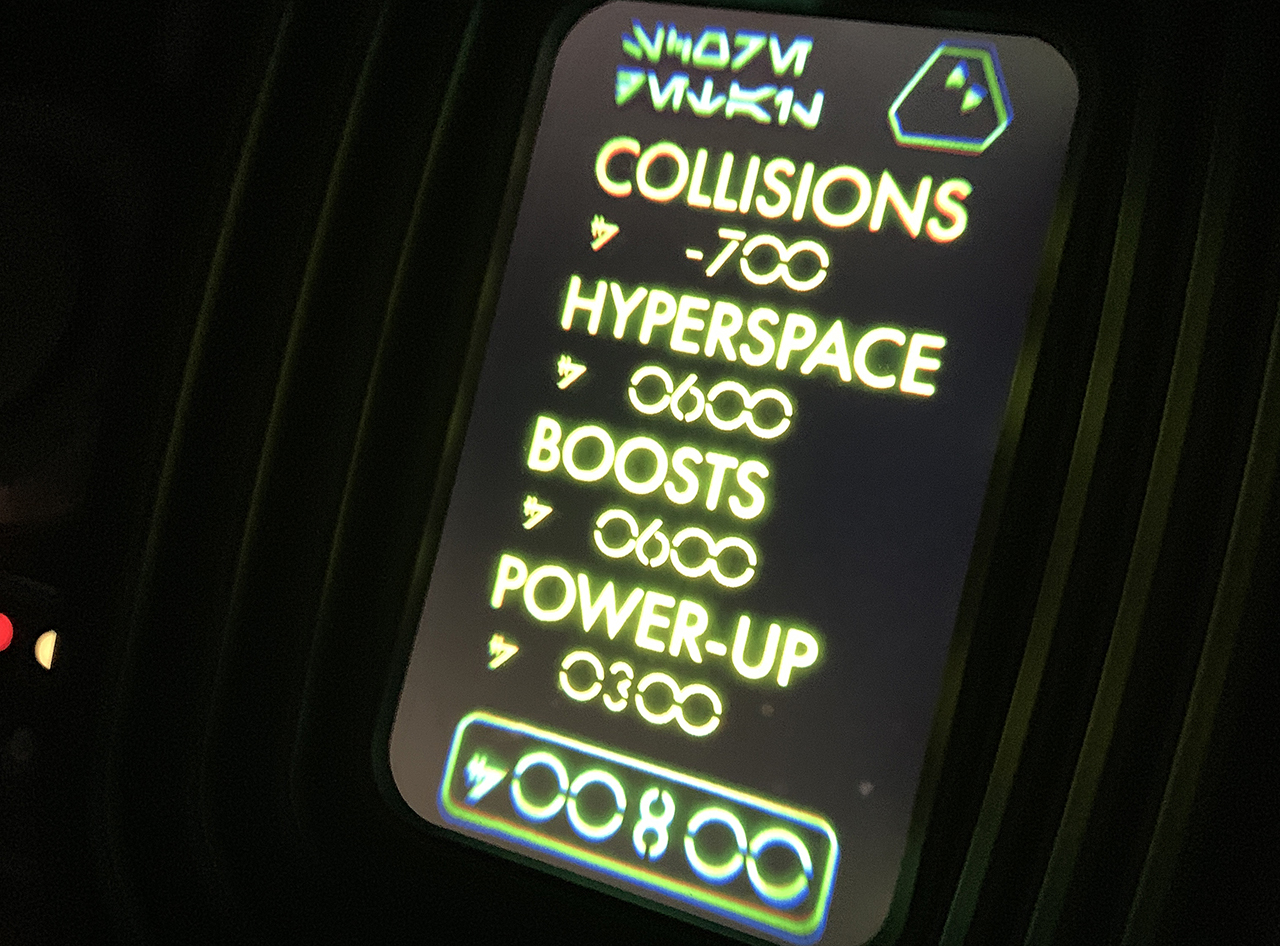 You’re given a score based on how you performed your role and how the whole flight performed. That translates into galactic credits that you can use in the Disney Play app for rewards. The Play App, as long as it has been logged into and opened, will get your score information from the ride automatically.

Cast members will then be able to see how you performed and tell you to “stay away from Hondo, he’s not going to be happy.” Or when you’re ordering a drink at the Cantina the barkeep might say, “I see that you had a successful run on the Falcon for Hondo.”

We also got a bit of a video and audio “extra” after our second flight when we did better score-wise than my first one. I’m not sure if that’s connected to score but I’m going to try to find out. Hondo was certainly more complimentary and there was a real story-based change between the two runs. We “did more” in the second run and “came back with more stuff,” and those things felt connected and visual — it wasn’t just a random score-based level.

I’ll leave the contents of the flight itself to spoiler territory, but it involved the traditional flying in tight spots, asteroids, shooting down TIE Fighters and entering hyperspace. It was intense, felt like a good length and was very satisfying.

I’ll have more to come from Galaxy’s Edge in the next few days, stay tuned.