Some spring cleaning news from iRobot. The Bedford, Mass.-based company just unveiled a pair of new robots designed to tag-team dirty floors. The Roomba s9+ and Braava Jet m6 both sport iRobot’s mapping technology, coupled with Imprint Link, which lets to two devices communicate in order to take turns on the floor.

The s9+ marks a new premium standard for the Roomba. That starts with arguably the most radical redesign in the robotic vacuum line’s 17-year history. The company’s moved away from the iconic fully round puck design that’s defined the product since its inception — and on that front, at least, it borrows from the Braava.

The front of the vacuum is flat, part of the new “PerfectEdge” tech that lets it get closer to walls — apparently one of the most requested features in recent Roomba generations. The corner brush has five 30mm arms that get dirt that early models were unable to reach. The downside of the flat side, however, is that the system has to do much more maneuvering, which in turn requires more battery.

No word on specifics there, but iRobot says it’s amped up the mAH accordingly. The top, meanwhile, features a large brushed metal circle that opens up to grab and replace the filter. Like last year’s i7+, the system ships with the optional Clean Base (notably, however, they use different Clean Bases with different connectors, so they’re not cross-compatible), which empties out the dirt while docked. 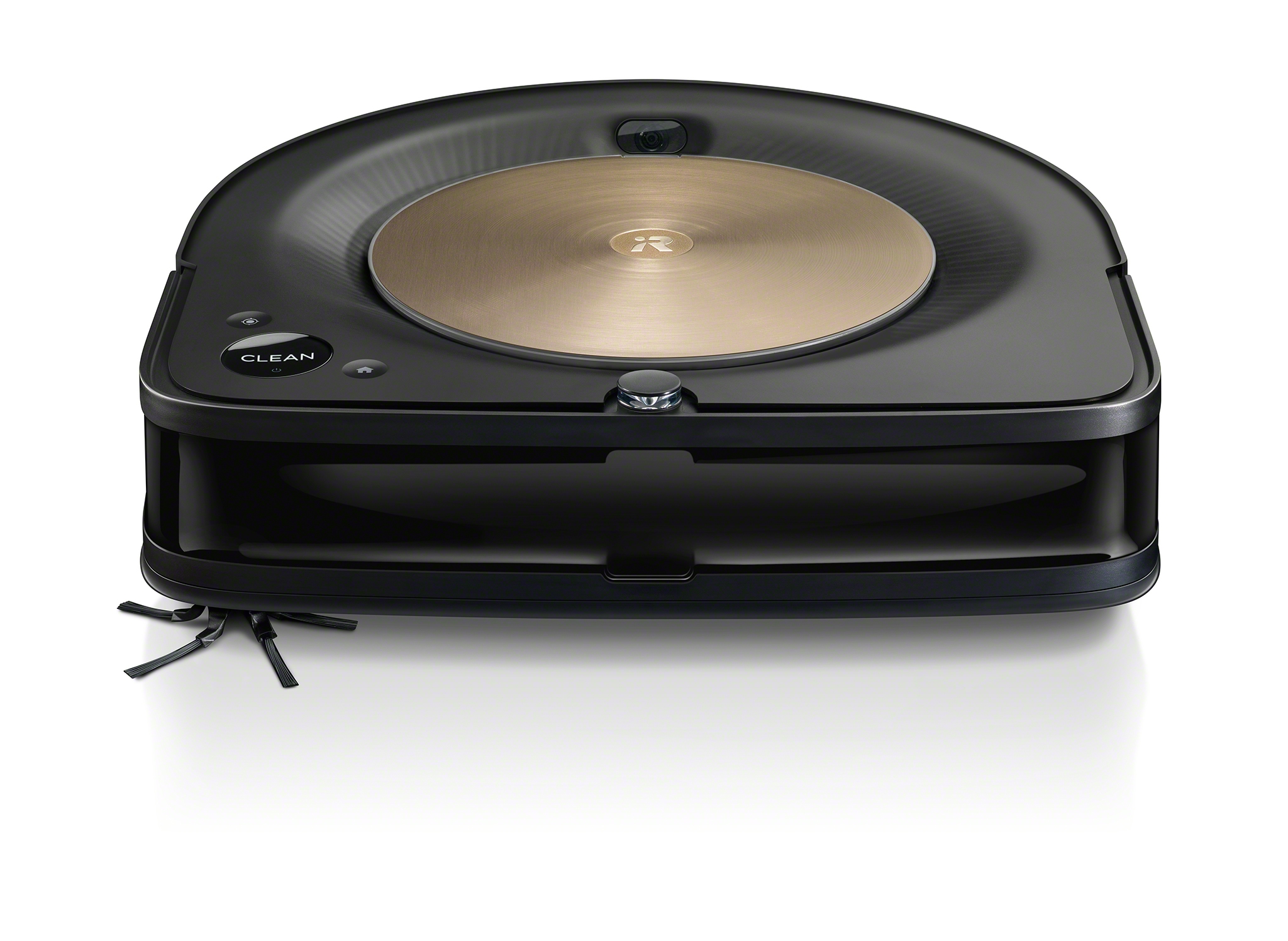 The new model features an upgraded 3D sensor that helps the system map and navigate, scanning for obstacles at a rate of 25 times a second. Also new is the Imprint Link Technology, which is the next step in the company’s floor-cleaning domination plan. The tech allows the Roomba to communicate with the new Braava, so they can take turns cleaning up the floor.

As always, cleans are initiated via the Home app. That sends the s9+ out to clean an area, followed by the m6. iRobot CEO Colin Angle tells TechCrunch that the company’s positioned the new robots (and its lawn mowing robot, Terra) as “iRobot 2.0.”

“It’s a coherent — from a design and communication perspective — set of top-end robots that are designed to raise the bar of functionality,” he tells explains.

Certainly it’s a step forward in the company’s long-promised vision of home robots becoming an integral part of the smart home, particularly when coupled with mapping and Alexa and Google Assistant functionality.

The new Braava, meanwhile operates as before, using a sprayed solution and dry pads, rather than the water tank used by Scooba. It uses similar mapping technology to get a floor plan and avoid obstacles. The cleaning system has been updated throughout, as well, with improved spraying and larger pads with a range of different materials. 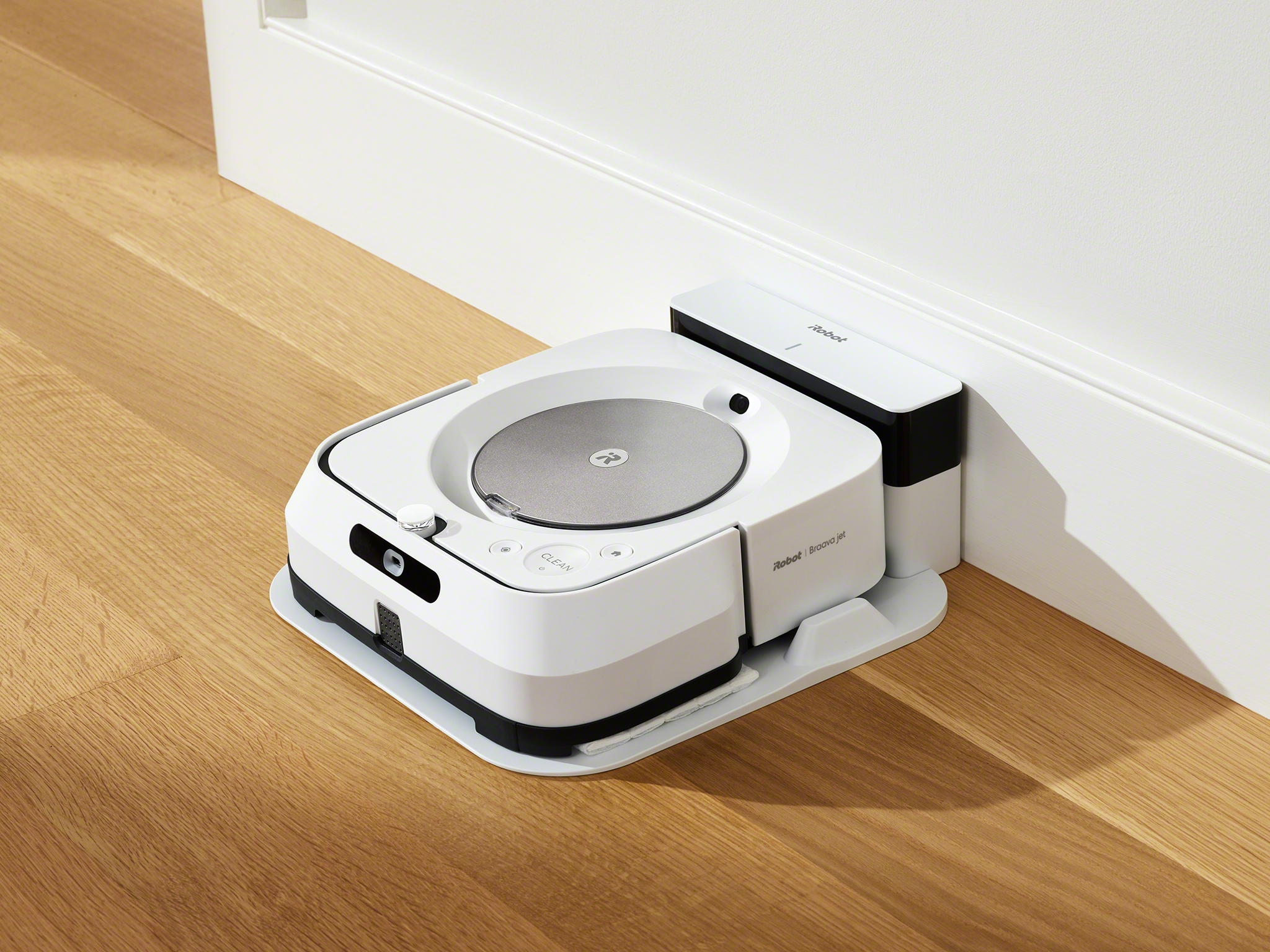 Naturally, none of this comes cheap — and let’s be honest, affordability has never really been iRobot’s strong suit. The s9+ runs $1,299 with the Clean Base and $999 without. The Braava m6 is $499, with a box of seven cleaning pads going for $8. They’ll both be available June 9. The vacuum sports a new 3D sensor for advanced room mapping and object detection. Unlike previous models, this Roomba is scanning the room for what’s in front of it at a rate of 25 times a second.

That’s coupled with iRobot’s new proprietary PerfectEdge technology, designed to better skirt the edges of rooms. The brushes and other cleaning bits have been rejiggered, as well.