How, and if, people travel on Memorial Day weekend can provide a fleeting glimpse at the state of the U.S. economy, or at least provide insight into consumer confidence. The upshot this year: a near record-setting travel despite a rising national gas price.

Nearly 43 million Americans were expected to travel in cars, trains and planes over the long weekend — 1.5 million more than the previous year, according to AAA and Inrix, a global transportation company that aggregates and analyzes traffic data collected from vehicles and highway infrastructure.

That’s the second-highest travel volume on record since AAA began tracking holiday travel volumes dating back to 2000, trailing only the bar set in 2005. Orlando, Florida is predicted to be the top travel destination this Memorial Day weekend, followed by New York, Las Vegas, Honolulu and Disneyland’s home Anaheim, California.

“Americans are eagerly anticipating the start of summer, and higher gas prices won’t keep them home this Memorial Day weekend,” Paula Twidale, vice president, AAA Travel said in a statement. “Consumer spending remains strong, helped by solid job and income growth. Families continue to prioritize spending their disposable incomes on travel, and near-record numbers of them are looking forward to doing just that for Memorial Day.”

The majority of those, about 37.6 million, will be traveling by car, translating into travel delays on major roads that could be more than three times longer than normal during evening commutes, according to Inrix.

Inrix and AAA predicted drivers would experience the greatest amount of traffic congestion on Thursday and Friday. But even though those soul-crushing traffic jams are now in the rearview mirror, it’s not all clear roads ahead. People do have to get back home, after all.

Major U.S. cities such as Boston and Washington D.C. are expected to experience triple the travel times on Monday compared to a normal trip. 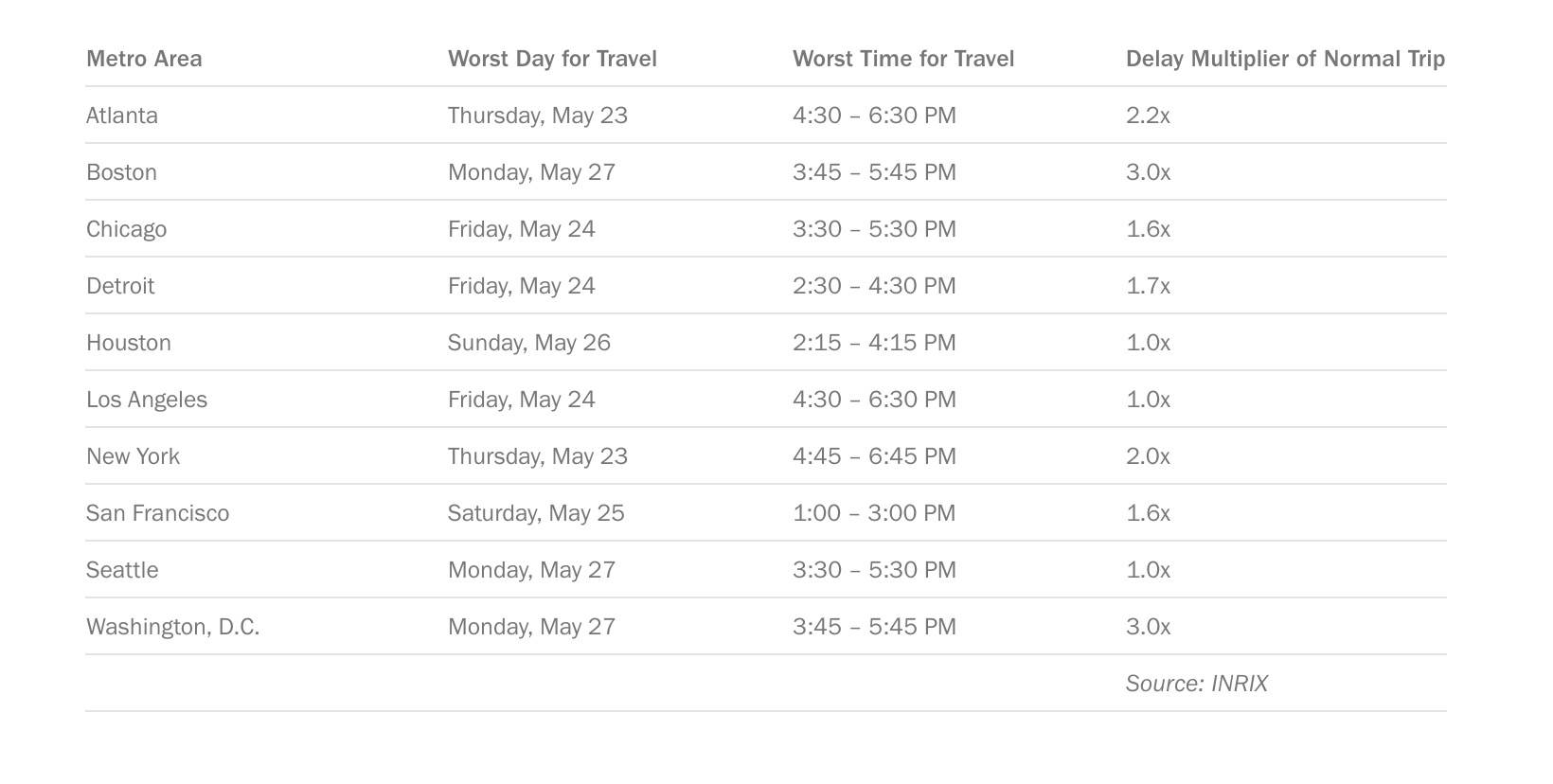 There is a cost to this kind of traffic congestion. The U.S. Travel Association released a survey Wednesday that found that Americans avoided an estimated 47.5 million auto trips due to highway congestion in 2018. That cost the economy $30 billion in travel spending and 248,000 American jobs, according to the organization’s economists.

The survey also found that for each additional hour that traffic adds to a weekend car trip, travel demand drops by an average of about 18 percent.