Review aggregator Rotten Tomatoes is taking additional steps to confirm that audience members actually see a movie before leaving a rating or review.

The site’s Audience Scores — distinct from the Tomatometer, which is based on professional reviews — have become a target for supposed fans looking to voice their discontent around big releases. That’s particularly been the case for movies like “Captain Marvel,” “Black Panther” and “Star Wars: The Last Jedi,” which feature women or people of color as their leads. (Despite the reactionary backlash, each of those films has grossed more than $1 billion worldwide.)

Earlier this year, the site announced that it would not allow users to post comments about a movie until it came out. But that only delayed the debate — if you wanted to rant about a title without seeing it, you just had to wait a little longer.

So starting today, Rotten Tomatoes is taking advantage of the fact that it’s owned by ticketing service Fandango (which in turn is owned by Comcast and WarnerMedia). For all new movies moving forward, users who want to leave a rating or review will be asked to verify their ticket purchase through Fandango.

To be clear, you’ll still be able to leave a review without verification, but verified reviews will be clearly marked, and only those reviews will be included when calculating the Audience Score. 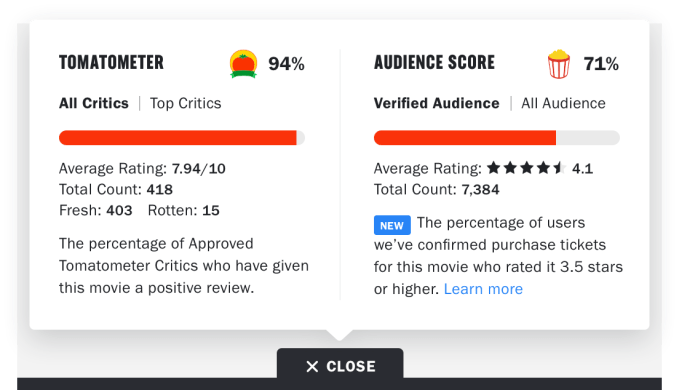 The Audience Score will also be replacing the user rating system in Fandango, with the service prompting ticket buyers to leave a Rotten Tomatoes review after they’ve seen the film.

“Because of the scale that Fandango brings, we expect to get to a critical mass of verified ratings really quickly out of the gate,” said Fandango’s vice president of product Greg Ferris.

He added that Rotten Tomatoes has also partnered with AMC Theatres, Regal and Cinemark Theatres to verify purchases from those theater chains later this year.

It’s also exploring ways to confirm that you watched a movie on streaming or TV. And while the system currently verifies just one review per transaction, Ferris said he’s looking at how to support multiple reviews for group ticket purchases.