Details of the 35.3-mile system, the first segment in a high-speed network that Boring Company founder and serial entrepreneur Elon Musk hopes will one day run all the way to New York, emerged recently in a 505-page draft environmental assessment.

Musk founded The Boring Company, or TBC, in 2016 after becoming frustrated with Los Angeles’ infamous traffic congestion. The aim was to find an efficient and cost-effective way to dig networks of tunnels for private vehicles. That idea evolved into the Loop, a system that would theoretically transport people in modified Tesla electric vehicles. 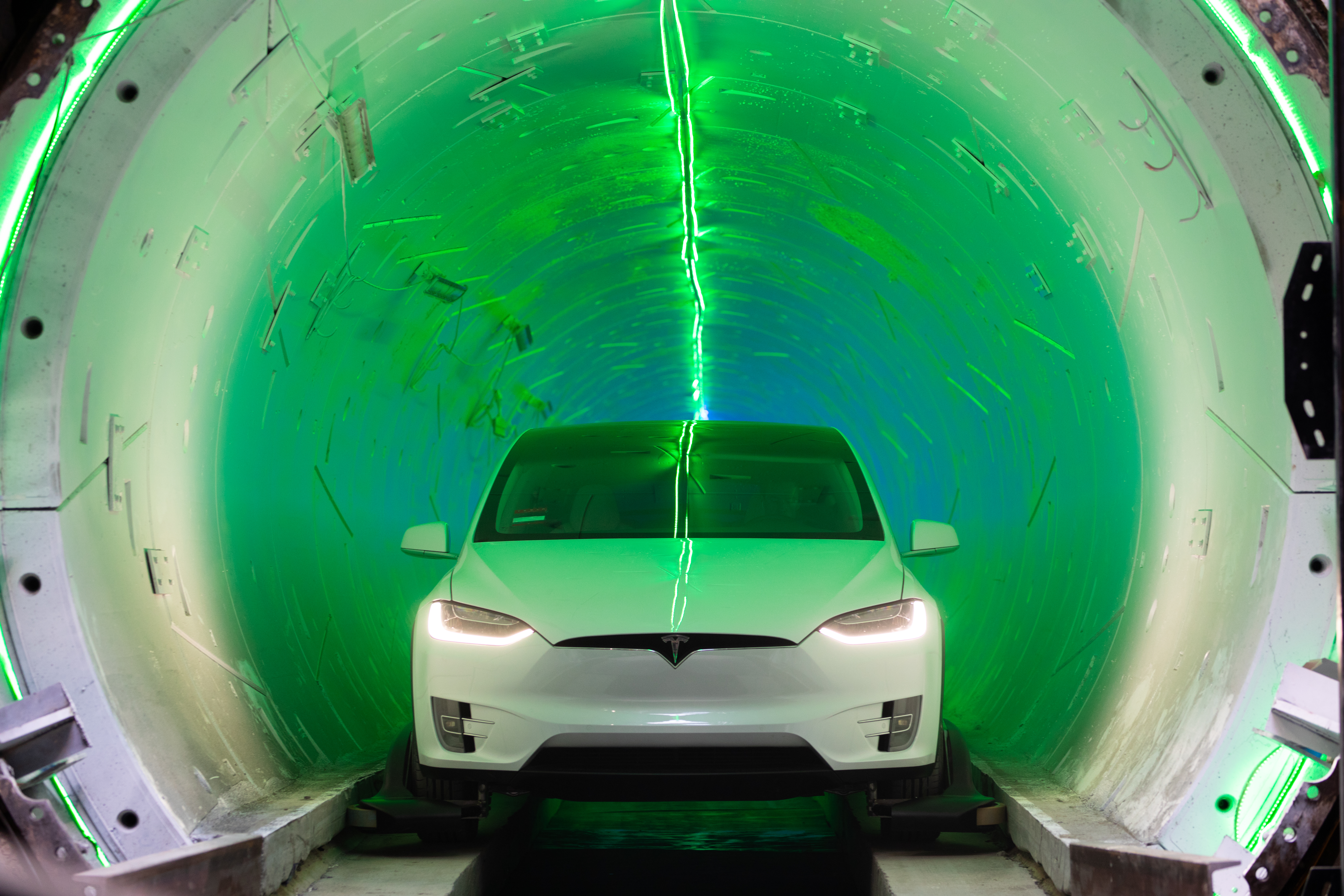 Musk showed off his vision for what he has described as an “‘entirely new system of transport“ during an event  last December that took guests and media through a 1.1-mile demonstration tunnel underneath 120th Street in the city of Hawthorne, Calif. near one of Musk’s other companies, SpaceX.

The Baltimore-to-Washington document specifies parallel tunnels running beneath highways, within which modified Tesla vehicles would travel autonomously at up to 150 miles per hour. Battery-powered cars would leave as frequently as every 30 seconds, with a journey time of just 15 minutes in either direction. In the future, Musk even envisages converting the tunnels into a Hyperloop system outfitted with pods that could theoretically reach speeds of 600 mph.

If the Baltimore-to-DC Loop system is considered a road tunnel, it would be the longest in the world. As a rail tunnel, it would only be surpassed by the epic Gotthard Base Tunnel running beneath the Swiss Alps.

But where the Gotthard Base Tunnel has escape passageways spaced about every 1,000 feet, Musk’s Loop will have up to 10,500 feet between emergency exits. That is more than four times the maximum distance permitted in standards set by the National Fire Protection Association (NFPA) for public rail and transit systems.

“Just because a vehicle doesn’t have gasoline doesn’t mean it’s not a significant fire risk,” said Glenn Corbett, a professor of security, fire and emergency management at the John Jay College of Criminal Justice in New York. “Lithium-ion batteries are perhaps even more dangerous, and have been an issue for airlines and fire safety agencies for the last 10 years.”

Modern electric vehicle batteries can suffer intense, runaway fires when damaged. There have been two recent incidents — one captured on video in China — of a parked Tesla spontaneously exploding. Tesla said this month that it was updating its vehicles’ battery software for charging and thermal management. “Although fire incidents involving Tesla vehicles are already extremely rare and our cars are 10 times less likely to experience a fire than a gas car, we believe the right number of incidents to aspire to is zero,” it wrote in a statement.

The Loop document says that TBC will install fire detection, suppression and safety measures as well as a powerful ventilation system. But the facilities for passengers to escape during an emergency, be it breakdown, fire, flooding or terrorism, leave much to be desired, says Corbett: “You’ll have people that range from 5 years old to 95. What they’re proposing now would certainly not pass muster.”

For a start, some of the Loop’s emergency exits are too far apart. Should a fire break out at the worst possible place, passengers could face a two-mile walk to an exit — and then up to another quarter of a mile to a ventilation shaft leading to the surface. This two-mile worse case scenario could occur if an accident or some other event blocks the tunnel right after passing an exit, preventing people from reversing course to the closer exit.

To comply with NFPA standards for rail tunnels, the Loop would need at least 74 such exits for each of the twin tunnels between Baltimore and DC. TBC’s document says it only intends to build “up to 70” in total.

If the Loop system were designated a road tunnel instead, complying would be even harder. Stricter NFPA standards for car and truck tunnels mean that TBC would have to construct more than 180 exit shafts for each tunnel.

“Even this standard, which is 1,000 feet between exits, is fairly weak,” Corbett said. “Smoke from a fire in an enclosed, below-grade area has a high propensity to kill people and create a lot of problems.”

The ‘definition of insanity’

When passengers eventually reach the ventilation shafts, their problems might not be over. The tunnel floor will be between 44 and 104 feet below the surface.

“One or more means of vertical access (e.g. elevator, man basket, stairs or ladder) would be provided for ingress/egress,” states TBC’s document. At the top of each shaft will be either a shed housing ventilation equipment, or a flat steel grate.

“That’s not going to work,” Corbett said. “You’re telling me a 70-year-old grandmother who’s just traveled thousands of feet is going to climb a ladder to get out? That’s crazy. It’s the definition of insanity.”

Such long and inconvenient escape routes would also hamper incoming firefighters, who typically have only a 30-minute supply of air for their breathing apparatus.

Another issue is that long tunnels are rare in the United States, a country that has more experience with fires in tall buildings than deep underground.

“All of our research in terms of stairwells has been done with downward motion,” Corbett explained. “What’s not been well studied are situations where people might have to walk a significant distance to get to a stairwell and then climb out. This is going to require a significant amount of research and consideration.”

Where long transit tunnels have been built recently, in Europe and Asia, engineers have taken a different approach. Instead of widely separated staircases, frequent cross-passageways allow passengers to quickly escape fire or smoke into either a dedicated safety tunnel or the tunnel traveling in the other direction.

In 2016, Jae-Ho Pyeon, a professor of civil and environmental engineering at San Jose State University, conducted a trend analysis of long tunnels around the world. He found that the majority of long rail tunnels globally have such crossover connections, and that all built in the last decade have exits spaced far closer than 2,500 feet.

A 2015 study by Edenbaum found that cross passages enable people to escape a smoky environment faster than stairways and can dramatically reduce construction costs.

The Boring Company did not respond to detailed questions about the Loop system but told TechCrunch that it had been designed to be the safest public transportation system in the world, which includes compliance with applicable safety and fire protection standards.

In the absence of federal rules for transit tunnels, the Loop will be subject to the regulations of the jurisdictions it passes beneath. Existing subway systems in Baltimore, Washington, D.C. and Maryland are all required to follow NFPA standards.

Curiously, TBC has yet to discuss its flagship project with Maryland’s fire agency.

“While the Office of the State Fire Marshal hasn’t been contacted by The Boring Company in regards to the proposed [Loop system], we would take the position of applying our standard underground subway safety standards to such a project to ensure the safety of everyone involved,” said Maryland State Fire Marshal Brian Geraci.

That being said, there is a slight chance that TBC would not be forced to include more shafts or emergency passages.

“[The NFPA standard states that] you can suggest solutions that are equivalent or superior to the stated methods, but they have to be approved the authority having jurisdiction,” says Edenbaum. “[TBC] may have an argument about how it can go as widely spaced as it wants. They could make the case that [the Loop] is safer than a highway. That’s a risk-based assessment, which is not very popular in North America, but it’s another way to look at it.”

The draft environmental assessment is currently in its public comment phase, along with a draft agreement between TBC and various federal agencies regarding the Loop’s impact on historical properties. There are also numerous other permits and approvals that will be necessary before TBC completes a detailed design and starts digging, including safety assessments.

TBC has also proposed projects in other parts of the country with varying success. The one closest to getting underway this year is in Las Vegas, where TBC has proposed building a high-speed underground transit system that would initially transport people around the Las Vegas Convention Center.

The upshot: For all of Elon Musk’s obsession with speed, the world’s longest tunnel won’t be arriving anytime soon.