Facebook’s former teen-in-residence Michael Sayman, now at Google, is back today with the launch of a new game: Emojishot, an emoji-based guessing game for iOS, built over the past 10 weeks within Google’s in-house incubator, Area 120.

The game, which is basically a version of charades using emoji characters, is notable because of its creator.

Lifestage was shut down two years ago, and Sayman defected to Google shortly afterward. At Google, he was rumored to be heading up an internal social gaming effort called Arcade where gamers played using accounts tied to their phone numbers — not a social network account.

At the time, HQ Trivia was still a hot title, not a novelty from a struggling startup — and the new gaming effort looked liked Google’s response. However, Arcade has always been only an Area 120 project, we understand.

To be clear, that means it’s not an official Google effort — as an Area 120 project, it’s not associated with any of Google’s broader efforts in gaming, social or anything else. Area 120 apps and services are instead built by small teams that are personally interested in pursuing an idea. In the case of Emojishot, it was Sayman’s own passion project. 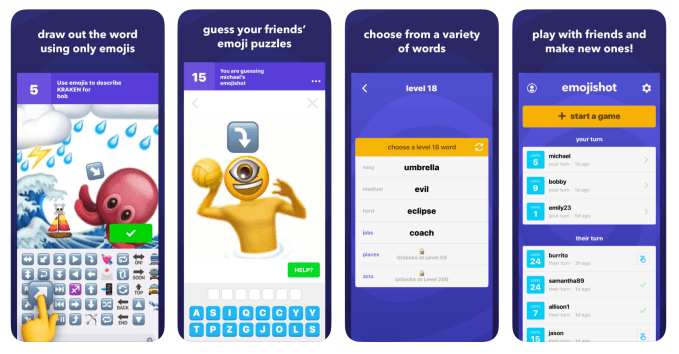 Emojishot itself is meant to be played with friends, who take turns using emoji to create a picture so friends can guess the word. For example, the game’s screenshots show the word “kraken,” which may be drawn using an octopus, boat and arrow emojis. The emojis are selected from a keyboard below and can be resized to create the picture. This resulting picture is called the “emojishot,” and also can be saved to your Camera Roll.

Players can pick from a variety of words that unlock and get increasingly difficult as you successfully progress through the game. The puzzles can also be shared with friends to get help with solving, and there’s a “nudge” feature to encourage a friend to return to the game and play. 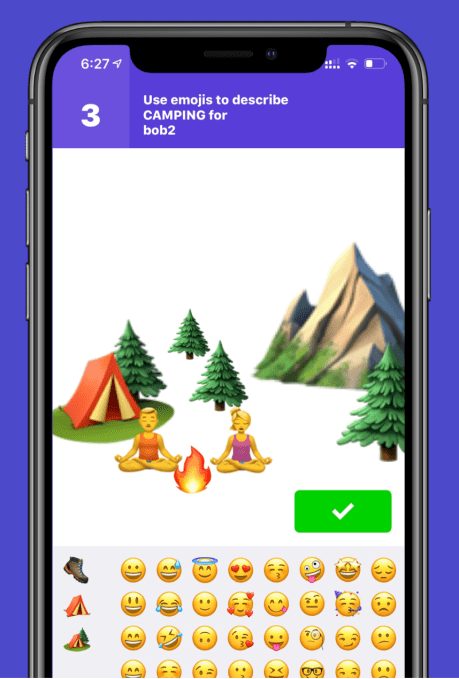 According to the game’s website, the idea was to make a fun game that explored emojis as art and a form of communication.

Unfortunately, we were unable to test it just yet, as the service wasn’t up-and-running at the time of publication. (The game is just now rolling out, so it may not be fully functional until later today.)

While there are other “Emoji Charades” games on the App Store, the current leading title is aimed at playing with friends at a party on the living room TV, not on phones with friends.

Sayman officially announced Emojishot today, noting his efforts at Area 120 and how the game came about.

“For the last year, I’ve been working in Area 120, Google’s workshop for experimental products. I’ve been exploring and rapidly prototyping a bunch of ideas, testing both internally and externally,” he says. “Ten weeks ago, we came up with the idea for an emoji-based guessing game. After a lot of testing and riffing on the idea, we’re excited that the first iteration — Emojishot — is now live on the iOS App Store…We’ve had a lot of fun with it and are excited to open it up to a wider audience,” Sayman added.

He notes that more improvements to the game will come over time, and offered to play with newcomers via his username “michael.”

The app is available to download from the U.S. iOS App Store here. An Android waitlist is here.