Facebook last week purged a network of hundreds of pages, groups and Instagram accounts it labeled as producing “coordinated inauthentic behavior” toward Africa.

The activity originated in Israel and was largely targeted toward Nigeria, Senegal, Togo, Angola, Niger, and Tunisia.

It was mostly political in nature and primarily paid for by Archemedes Group, a global political consulting firm, Facebook said.

This isn’t the first case of social media platforms used as vehicles for political manipulation in Africa. Cambridge Analytica, the controversial big-data actor employed in Brexit and Donald Trump’s 2016 presidential victory, was active on the continent before and after both events.

The people behind this network used fake accounts to run Pages, disseminate their content and artificially increase engagement. They also represented themselves as locals, including local news organizations, and published allegedly leaked information about politicians. The Page administrators and account owners frequently posted about political news, including topics like elections in various countries, candidate views and criticism of political opponents.

The activity took place over 65 Facebook accounts, 161 Pages, 23 Groups, 12 events and four Instagram accounts.  There were 2.8 million accounts that followed one or more of these pages and 5,500 accounts joined at least one of these Groups.

Facebook said more than $800,000 was spent on ads associated with these accounts starting in December 2012 and running as recently as April this year.

Facebook declined to offer TechCrunch additional information on the account deletions beyond their release. But the Atlantic Council’s Digital Forensic Research Lab (DFRL) has been digging deeper and released some initial findings in a Medium Post. In addition to connecting the accounts to activity in Ghana — a country not named in FB’s release — DFRL shed some light on fake news targeted at Nigeria’s February 2019 elections.

Examples included a “Make Nigeria Worse Again” trolling initiative aimed at the campaign of Atiku Abubakar, who was challenger to Nigeria’s incumbent president Muhammadu Buhari — who won a second-term. 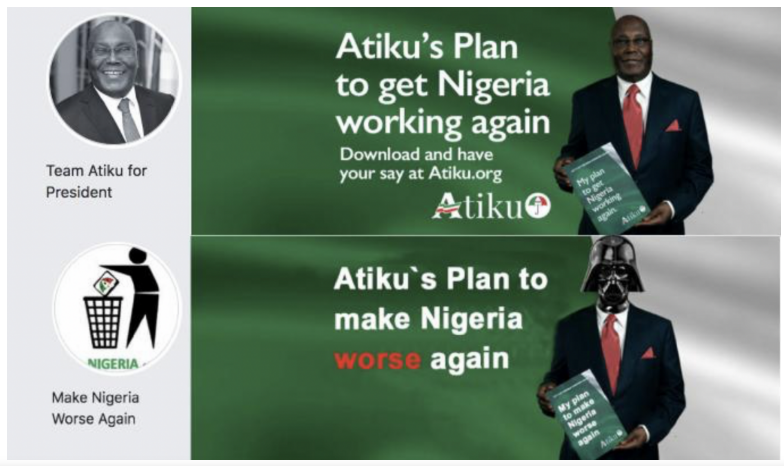 DFRL also shared examples connected to the deleted Facebook accounts aimed at elections in Mali, Tunisia, Niger, Togo, Algeria, and Angola. It noted the ads related to this nexus of activity were paid for in U.S. dollars, Israeli Shekels, and Brazilian reals. “The spending in different currencies suggests how vast the operation was, encompassing multiple regions around the world,” said DFRL’s reporting.

Fake news on social media platforms has reared its head in Africa several times. Cambridge Analytica, backed by U.S. big-data billionaire Robert Mercer, was found to have been involved in elections in Kenya and Nigeria before its controversial role directing pro-Brexit and pro-Trump online activity in 2016. Facebook later banned Cambridge Analytica from its platform.

Social media driven fake news — primarily on Facebook and WhatsApp — became such an issue in Kenya’s 2017 elections the country’s parliament passed a bill in 2018, with specific punitive measures, to combat it. An investigation by the UK’s Channel 4 later revealed that Cambridge Analytica had advised the 2017 presidential campaign of Kenyan incumbent president Uhuru Kenyatta, who won in a disputed run-off vote.

Facebook has prioritized growth in Africa, particularly since Mark Zuckerberg visited the continent’s tech scene in 2016.

The U.S. social media company has grown Africa users to over 200 million and Facebook owned chat-tool, WhatsApp, is the most downloaded messenger app on the continent.

But Facebook’s recent Africa account purge shows when Facebook travels, so too does its list of pros and cons, including the ability of global actors to use it for nefarious uses in local settings.