In WeChat-dominated China, there’s no shortage of challengers out there claiming to create an alternative social experience. The latest creation comes from ByteDance, the world’s most valuable startup and the operator behind TikTok, the video app that has consistently topped the iOS App Store over the last few quarters.

The new offer is called Feiliao (飞聊), or Flipchat in English, a hybrid of an instant messenger plus interest-based forums, and it’s currently available for both iOS and Android. It arrived only four months after Bytedance unveiled its video-focused chatting app Duoshan at a buzzy press event. 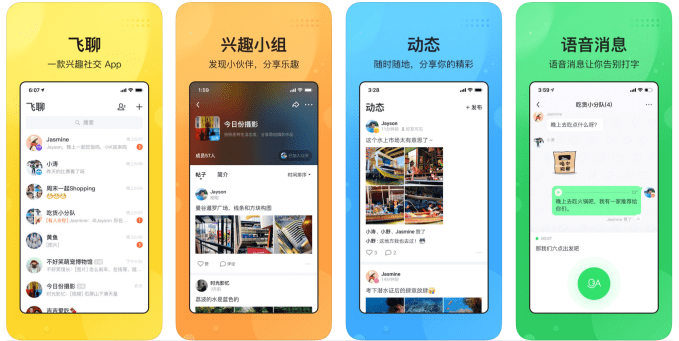 Some are already calling Feiliao a WeChat challenger, but a closer look shows it’s targeting a more niche need. WeChat, in its own right, is the go-to place for daily communication in addition to facilitating payments, car-hailing, food delivery and other forms of convenience.

Feiliao, which literally translates to ‘fly chat’, encourages users to create forums and chat groups centered around their penchants and hobbies. As its app description writes:

Feiliao is an interest-based social app. Here you will find the familiar [features of] chats and video calls. In addition, you will discover new friends and share what’s fun; as well as share your daily life on your feed and interact with close friends.

Feiliao “is an open social product,” said ByteDance in a statement provided to TechCrunch. “We hope Feiliao will connect people of the same interests, making people’s life more diverse and interesting.”

It’s unclear what Feiliao means by claiming to be ‘open’, but one door is already shut. As expected, there’s no direct way to transfer people’s WeChat profiles and friend connections to Feiliao, and there’s no option to log in via the Tencent app. As of Monday morning, links to Feiliao can’t be opened on WeChat, which recently crossed 1.1 billion monthly active users.

On the other side, Alibaba, Tencent’s long-time nemesis, is enabling Feiliao’s payments function through the Alipay digital wallet. Alibaba has also partnered with Bytedance elsewhere, most notably on TikTok’s Chinese version Douyin where certain users can sell goods via Taobao stores.

In all, Flipchat is more reminiscent of another blossoming social app — Tencent-backed Jike — than WeChat. Jike (pronounced ‘gee-keh’) lets people discover content and connect with each other based on various topics, making it one of the closest counterparts to Reddit in China.

Jike’s CEO Wa Nen has taken noticed of Feiliao, commenting with the 👌 emoji on his Jike feed, saying no more. 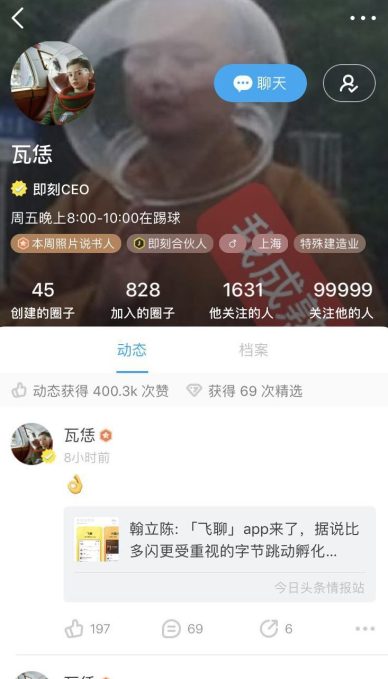 “I think [Feiliao] is a product anchored in ‘communities’, such as groups for hobbies, key opinion leaders/celebrities, people from the same city, and alumni,” a product manager for a Chinese enterprise software startup told TechCrunch after trying out the app.

Though Feiliao isn’t a direct take on WeChat, there’s little doubt that the fight between Bytedance and Tencent has heated up tremendously as the former’s army of apps captures more user attention.

According to a new report published by research firm Questmobile, ByteDance accounted for 11.3 percent of Chinese users’ total time spent on ‘giant apps’ — those that surpassed 100 million MAUs — in March, compared to 8.2 percent a year earlier. The percentage controlled by Tencent was 43.8 percent in March, down from 47.5 percent, while the remaining share, divided between Alibaba, Baidu and others, grew only slightly from 44.3 percent to 44.9 percent over the past year.

TikTok is giving China a video chat alternative to WeChat