While U.S. government officials celebrate what they must consider to be a win in their battle against the low-cost, high-performance networking vendor Huawei and other Chinese hardware manufacturers, the country is at risk of falling seriously behind in the broader, global competition for telecom tech and customers.

It may be a race that the U.S. is willing to concede, but it should be noted that Huawei’s sphere of influence on other shores continues to expand, even as the company’s ability to operate in the U.S. is completely proscribed.

Indeed, Huawei’s executive director and chairman of its investment review board, David Wang, told Bloomberg that, “Our U.S. business is not that big. We have global operations. We still will have stable operations.”

Wang is right… to a point. Huawei derives most of its sales from international markets, according to a 2018 financial report released earlier this year, but it depends heavily on technology from U.S. chip manufacturers for its equipment. Without those supplies, Huawei could find itself in a very difficult spot, indeed. 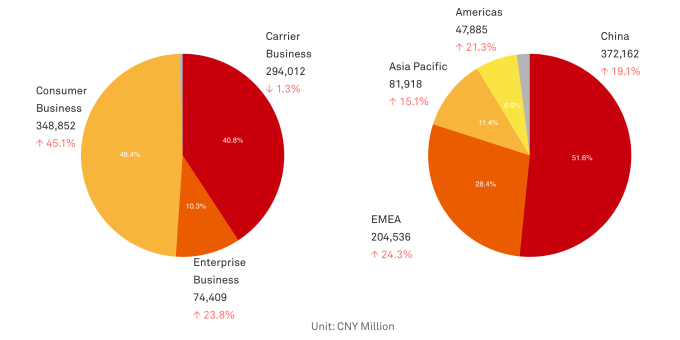 Huawei’s end of year financials showed its consumer devices business is now its main money-maker, while the majority of its revenue is not derived from the U.S. market

And the U.S. has its reasons for working to stymie Huawei’s efforts to expand the reach of its networking technologies, as this excellent Twitter thread from Adam Townsend persuasively argues.

Thread about China, Huawei. Spying & World war 5(g).
You're about to become the head of your own Intel Agency. You'll be an authority and you'll win any bar fight argument.
Let’s begin… pic.twitter.com/cEq3MhhJwF

Essentially, China has invested its basically limitless capital into subsidizing next-gen wireless technology and buying up next-generation startups and innovators, all while the U.S. has borne early-stage risk. Meanwhile, it is also using unlimited money to poach regulators and industry experts who might advocate against it.

Huawei continues to make inroads in nations across the emerging markets of Latin America, Eastern Europe, Southeast Asia and Africa, where demand for connectivity is on the rise. Those are regions where the U.S. has plenty of strategic interests, but America’s ability to sway public opinion or entice governments to act against Chinese networking companies could be severely limited by its inability to offer meaningful incentives or alternatives to them.

Even with the passage of the BUILD Act in October 2018, which was meant to revitalize U.S. foreign aid and investment with a $60 billion package, it’s worth noting that China spent nearly $47 billion in foreign investment in Europe alone in 2018. Chinese direct investments totaled another $49.45 billion into Africa and the Middle East and $18 billion into South America, according to data from the American Enterprise Institute, compiled by Foreign Policy.

Those investments have turned nations that should be staunch political allies into reluctant or simply rhetorical backers of the U.S. position. Take the relationship between the U.S. and Brazil, for example — a historically strong partnership going back years and one that seemingly only strengthened given the similarities between the two ultraconservative leaders in power in both nations.

However, as Foreign Affairs reports, Brazil is unlikely to accede to President Trump’s demands that Brazil aids in steps to block China’s economic expansion.

“Brazilian business groups have already begun to defend the country’s deep trade ties to China, rightly pointing out that any hope of containing China and once more turning the United States into Brazil’s most important trading partner is little more than unrealistic nostalgia,” writes Foreign Affairs correspondent, Oliver Stuenkel. “Working alongside powerful military generals, these business associations are mobilizing to avoid any delays that sidelining Huawei in the region could cause in getting 5G up and running.”

The whole article is worth reading, but its refrain is that the attempts by U.S. government officials to paint Huawei and Chinese economic inroads as a national security threat in developing economies are largely falling on deaf ears.

It’s not just networking technologies either. As one venture capitalist who invests in Latin America and the U.S. told TechCrunch anonymously: “It’s interesting how the U.S.-China relationships are going to affect what is happening in Latin America. The Chinese are already being more aggressive on the banking side.”

China’s big technology companies are also taking an interest in South America, both as vendors and as investors on the continent.

In an article in Crunchbase, the South American and Chinese-focused venture capitalist, Nathan Lustig underscored the trend. Lustig wrote:

In both the private and the public sectors, China is swiftly increasing its support for Latin America. Chinese expertise in financial technology, as well as its influence in developing markets around the world, is turning China into a strategic partner for startups and entrepreneurs in Latin America. Most of the Chinese investment in Latin America so far is going to Brazil, although this is likely to spread across the region as Chinese investors become better-acquainted with the local tech ecosystems, most likely to Mexico.

Indeed, China has an entire catalog of low-cost technologies and economic packages from state-owned and privately held investors to support their adoption, backing up its position as the leader for tech across a range of applications in emerging markets.

For the U.S. to compete, it will have to look beyond protectionism at its shores to actual commitments to greater economic development abroad. With lower tax revenues coming in and the prospect of giant deficits building up as far as the eye can see, there’s not much room to promote an alternative to Huawei internationally. That could leave the country increasingly isolated and create far more problems as it gets left behind.