In an age of online misinformation and clickbait, how do you know whether a publication is trustworthy?

Startup Credder is trying to solve this problem with reviews from both journalists and regular readers. These reviews are then aggregated into an overall credibility score (or rather, scores, since the journalist and reader ratings are calculated separately). So when you encounter an article from a new publication, you can check their scores on Credder to get a sense of how credible they are. 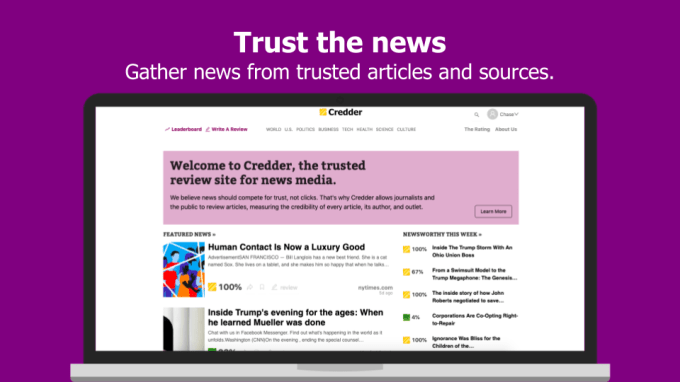 Palmieri told me he started working full-time on the project back in 2016, with the goal of “giving news consumers a way to productively hold the news producers accountable,” and to “realign the financial incentives of online media, so it’s not just rewarding clicks and traffic metrics.” In other words, he wanted to create a landscape where publishing empty clickbait or heavily slanted propaganda might have actual consequences.

If Credder gets much traction, it will likely attract its share of trolls — it’s easy to imagine that the same kind of person who leaves a negative review of “Captain Marvel” without seeing the movie (this is a real issue that Rotten Tomatoes has had to face), would be just as happy to smear The New York Times or CNN as “fake news.” And even if a reviewer is offering honest, good-faith feedback, the review might be less influenced by the quality of a publication’s journalism and more by their personal baggage or political leanings.

Palmieri acknowledged the risk and pointed to several ways Credder is trying to mitigate it. For one thing, users can’t just write an overall review of The New York Times or The Wall Street Journal or TechCrunch. Instead, they’re reviewing specific articles, so hopefully they’re engaging with the substance and specifics of the story, rather than just venting their preexisting feelings. The scores assigned to publications and to journalists are only generated when there are enough article ratings to create an aggregated score.

In addition, Palmieri said the reviewers “are also being held accountable,” because users can upvote or downvote their comments. That affects how the reviews get weighted in the overall score, and in turn generates a rating for the reviewers.

“It will take time for the weight of your reviews to be meaningful, and there will be a visible track record,” he said. 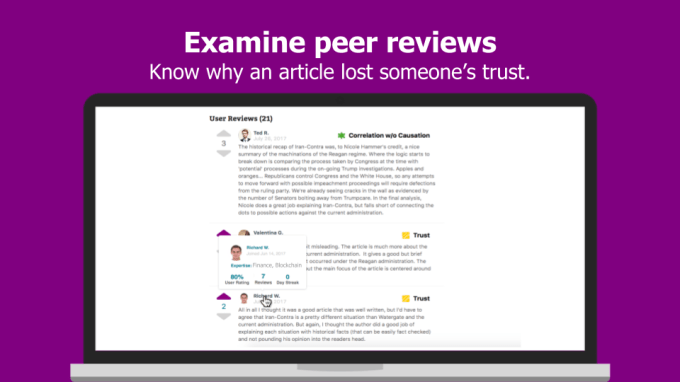 While I appreciated Palmieri’s vision, I was also skeptical that a credibility score can actually influence readers’ opinions — maybe it will matter when you encounter a new publication, but everyone already has set ideas about who they trust and don’t trust.

When I brought this up, Palmieri replied, “What we see in today’s media landscape is the left-wing media attacks the right-wing media, and vice versa. We never get a sense of what our fellow news consumers feel. What’s more likely to change your perspective and make you question yourself? It’s going to a rating page [for] an article, pointing out a specific problem in that article.”

To be clear, Credder isn’t hosting articles itself, simply crawling the web and creating rating pages for articles, publications and writers. As for making money, Palmieri said he’s considered both a tipping system and an ad system where publications can pay to promote their stories.

TechCrunch readers can check it out early by visiting the Credder website and using the promo code “TCNEWS”.