Despite a $5.7 million FTC fine and changes to restrict its use by those younger than 13 years old, TikTok retained its No. 1 position as the most downloaded app on the Apple App Store for the fifth consecutive quarter, according to a new report from Sensor Tower. The app saw more than 33 million App Store downloads during Q1, and was followed by YouTube, Instagram, WhatsApp and Messenger to round out the top five.

The No. 16 top app, Twitter, also had a good quarter, the report noted.

With 11.7 million App Store downloads, it saw its biggest quarter in terms of downloads since Q1 2015 — and a year-over-year increase of 3.6%. Of course, these figures won’t necessarily translate to an increase in active users, as installs aren’t a direct correlation to usage. 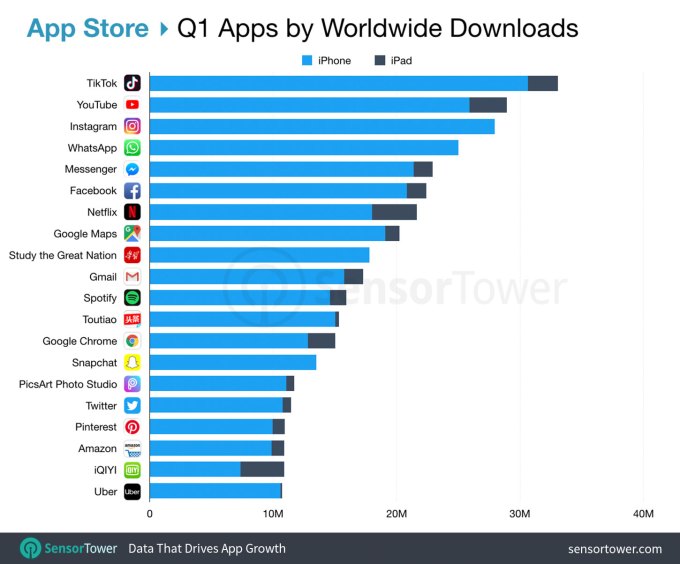 But while TikTok was again topping the App Store, it wasn’t the most downloaded app on Android devices in Q1.

With a bigger footprint in emerging markets and a larger total user base, Android trends can look different from those on iOS. This past quarter, WhatsApp was the No. 1 app on Google Play, with nearly 199 million installs. It was followed by Messenger, then TikTok, Facebook and Instagram.

Facebook, WhatsApp and Messenger all saw more than 150 million installs apiece in Q1 2019, as did TikTok.

Though not the top app on Android, TikTok still had a huge quarter — particularly in India, where 88.6 million new users installed the app in Q1, up 8.2 times over Q1 2018, Sensor Tower noted in an earlier report.

That said, TikTok’s numbers for the next quarter may not be as good. The app was banned in India in April over illegal content, including pornography. While that ban was lifted later that month, Sensor Tower estimated it had cost the app at least 15 million downloads there, and what would have been its biggest-ever month.

An up-and-comer in Q1 included YouTube Kids, which saw a 291% quarter-over-quarter increase and 29 millions downloads on Google Play, where it joined YouTube and YouTube Music to become a top 20 app. 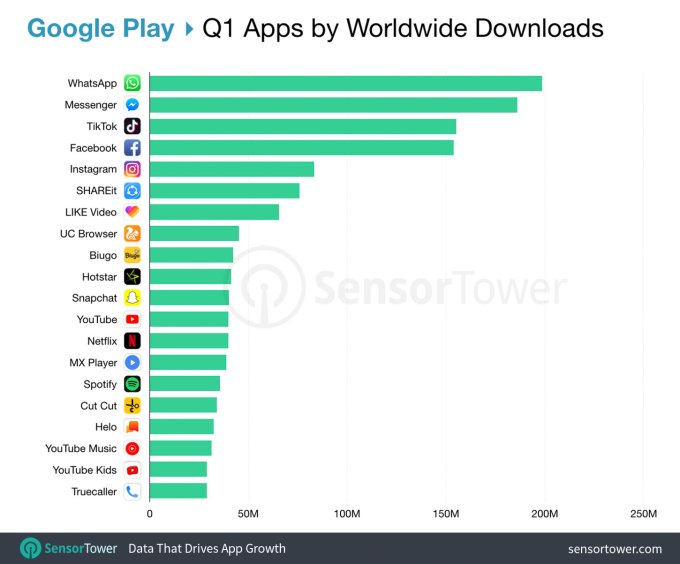 With the two app stores figures’ combined, WhatsApp became the most downloaded app in the quarter, with more than 22 million installs across the App Store and Google Play.

Messenger clocked in at No. 2 with nearly 203 million installs. And TikTok’s gains on the App Store allowed it to take the No. 3. position, followed by Facebook and Instagram.

The rest of the top 10 didn’t change, with Facebook claiming four of the top five spots. Meanwhile, first-time users in India pushed image editor PicsArt into the worldwide top 20. 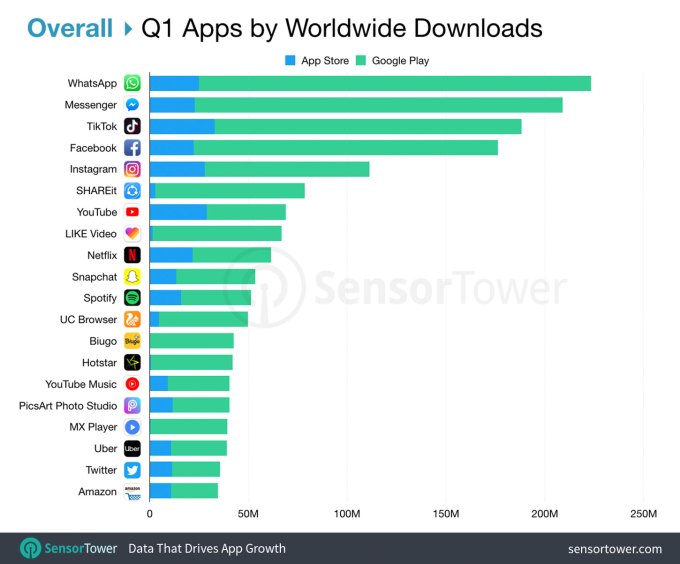