Over the past five years, there has been a clear drop in seed investing. Between 2010 and 2014 there was an influx of “micro” VCs, perfectly equipped to deploy seed capital. Since then, we have seen a gradual decline.

One key reason is that the Micro VCs were successful. Turns out that investing at the seed stage is a really strong strategy for generating returns. Their portfolios performed very well and, as a result, were able to raise a much larger second and third fund.

Unfortunately, once your fund size exceeds $75 million, I’d argue, it is very difficult to focus on the seed stage. It is simply too difficult to identify enough quality opportunities to deploy all that capital. Instead, you need to write bigger checks. In order to do that, you start to focus on later rounds. This leaves a gap at the seed stage, which I’d argue, is the most exciting.

Because of that, I believe there is an incredible opportunity for this gap to be filled by corporate venture funds. We, at dunnhumby, have invested here, successfully, for years. And by successfully, I don’t mean just financially, though we have returned far more than we have invested; I also mean strategically. There are incredible strategic benefits to investing at the seed stage. 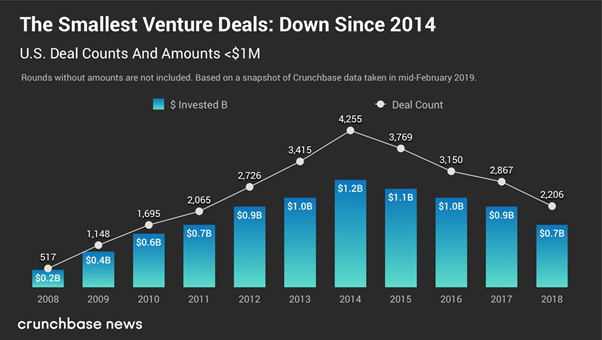 The seed stage is where the greatest innovation is happening. We invest to inform our own strategic direction and identify new technologies and business models prior to their impact on our own business. We also use it to identify and embed with emerging companies who could, one day, be great partners.

In the recent surge of corporate innovation efforts, venturing is not leveraged nearly enough. There are few ways of exposing innovation better than aligning with a company that is innovating daily as a means of survival. There is no better inspiration than watching a team of two grow into a team of 100-plus, often pulling the slower-moving corporate along for the ride.

There is a flexibility and eagerness with early-stage companies that allows for greater collaboration. They are not so large as to have their own, built-out bureaucracy, and are actively willing to work together. For many, it is why they take money from a strategic, in the hope that there is more than just capital that comes from the relationship.

In many cases, these synergies do not emerge right away. However, there is a closeness that forms between the two companies that begins to bear fruit, from my experience, about one year post-investment.

For the startup, there is increased exposure to the investor’s client base and resources. For the corporation, there is firsthand insight into the success of the startup’s business model, technology and market. From this, partnership and acquisition opportunities emerge.

Because of the strategic nature behind these investments, they also act as an incubator for future partnerships and acquisitions.

Participating at the seed stage does not require significant capital contributions.

By aligning at the seed stage, you have the unique opportunity to watch the company grow. What is the market demand and is there an opportunity to enter a new space before others have realized the opportunity? Often, we will take a board or board observer position with the company, which brings even greater insight into their performance, as well as the potential upside of an even closer relationship.

Also, nearly as important, is that you gain an even greater insight into the company culture and their alignment with your own. In most cases, these discussions will emerge from early collaborations, where your broader teams will have the opportunity to interact and form a culture of their own. This cultural alignment will increase the likelihood of a successful outcome, whether that is a partnership or full acquisition.

Participating at the seed stage does not require significant capital contributions. For one later-stage investment, you could make three to four seed investments, which increases your exposure to the above items and drastically reduces the financial impact on your balance sheet. If done right, within four to five years, the fund should contribute much more than it costs.

Does this mean that the corporate should finance the entire seed round? Not typically. In fact, for almost all of our investments to date, we are participating as part of a syndicate of investors. Often this syndicate is made up of other corporate investors (often referred to as “Strategics”). This reduces risk as well as the financial burden for each investor at this stage. The goal is to get a seat at the table. For strategic purposes, there is little difference between owning 5% versus 20% at this stage. Once the company grows larger, this dynamic will change.

At dunnhumby we invest in less than 2% of the companies we meet with. We are diligent about where we invest. However, I’d argue that the 98% we pass on are nearly as important. Because we have an investment arm, we are exposed to incredible innovation across a range of industries that most companies, that lack a seed investing strategy, do not see. At least, not until it is too late. Capital gives us a seat at the table.

These conversations provide signals into emerging trends in our industry, as well as our clients’ industries. When we pass, often the relationship does not end. Many times, they will lead to partnership discussions, referrals and introductions that are equally beneficial to the startup.

The opportunity is there. Corporations just need to seize it.