Retail Zipline, a startup aiming to improve communication between retail stores and corporate decision makers, announced today that it has raised $9.6 million in Series A funding.

CEO Melissa Wong previously worked in corporate communications for Old Navy, where she said she saw “such a disconnect between what was decided in headquarters and what was decided in stores.” For example, management might decide on a big marketing push to sell any remaining Mother’s Day-related items after the holiday has passed, but then “the stores wouldn’t do it.”

“The stores would say there were too many messages, they didn’t see the memo, they didn’t know it was a priority,” Wong said.

So she founded Retail Zipline with CTO Jeremy Baker, with the goal of building better communication tools for retailers. Baker said that while they looked at existing chat and task management software for inspiration, those tools were “mostly built for people sitting at a desk all day,” rather than workers who are “on the floor, dealing with customers.”

Retail Zipline’s features include messaging and task management — plus a centralized library of documents and multimedia and a survey tool to track results and feedback from stores. 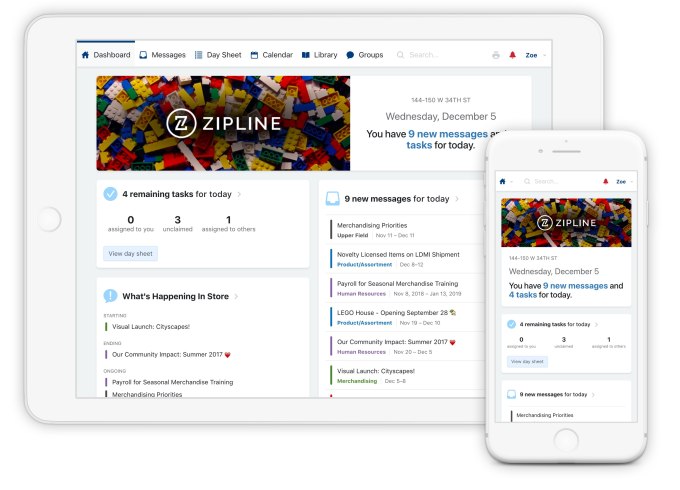 To illustrate how the software is actually being used, Baker outlined a scenario where an athletic shoe company is launching “a huge initiative,” with a big-name athlete signed on to promote the latest pair of shoes.

“In a traditional environment, someone might FedEx over a package to [the store], someone might send an email down, ‘Hey, look for a package on this day,’ someone else from the marketing team might say, ‘Hey guys, we’re doing a shoe launch,’ ” he said. “All of this in these disparate systems, where people have to piece together the story. It’s kind of like a murder mystery.”

Baker said that Retail Zipline, on the other hand, provides a single place to find all the needed materials and tasks “tied together with a bow, instead of a store manager spending 10-plus hours in the back room trying to piece this thing together, or even worse not seeing it.”

The company’s customers include the LEGO Group and Lush Cosmetics. Wong said Retail Zipline works “with anyone that has a retail location” — ranging from Gap, Inc. with thousands of stores, to Toms Shoes with 10.

The funding was led by Emergence, with Santi Subotovsky and Kara Egan from Emergence both joining the startup’s board of directors. Serena Williams’ new firm Serena Ventures also participated.

“As someone with an incredibly active life, I understand the need to be dynamic, and capable of quickly adapting to shifting priorities, but I’m also aware of the stress a fast-paced work environment can impose,” Williams said in a statement. “Retail Zipline is tackling this issue head-on in retail – a notoriously stressful industry – by pioneering products that help store associates get organized, communicate efficiently, and deliver amazing customer experiences.”