Replex wants to help track cloud spending, but with a cloud native twist, and today it announced a $2.45 million seed round. The company previous raised $1.68 million in 2017 for a total of $4.15 million so far.

As companies shift to a cloud native environment, and move ever more quickly, it is increasingly important to get visibility into how development and operations teams are using resources in the cloud. Replex is designed to give more visibility into spending and to help optimize the container environment in the most economical way.

Company CEO and co-founder Patrick Kirchhoff says the product is about controlling spending in a cloud native context. “The Replex platform enables operators, finance and IT managers to see who spends what. We allow them then to right-size clusters, pods and container sizes for optimal results, and they are able to control the cost, manage chargebacks and find [optimal] capacity,” he explained. 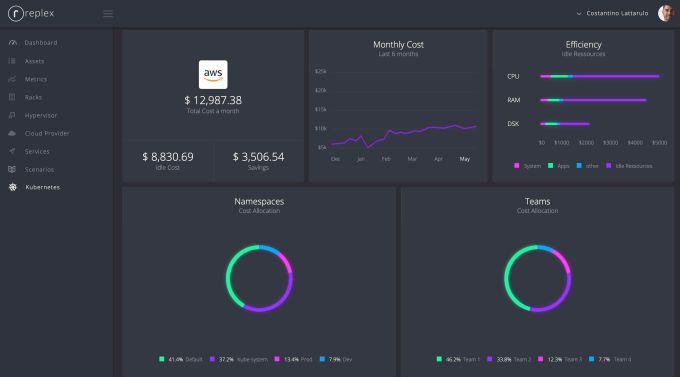 While there are variety of similar cloud cost control startups out there, Kirchoff says his company has been purpose built for cloud native environments and that is a key differentiating factor. “We see that the way organizations work has completely changed because with the move to cloud native infrastructure, teams within the business lines are now able to provision infrastructure on their own. Central IT departments still need to control costs and govern these resources, but they don’t have the tools to do that anymore because the existing tools are built on architectures for traditional infrastructure, and not for the cloud native approach,” he said.

Kirchoff says that developers tend to over provision just to be on the safe side, but using data from Replex, customers can figure out the optimal amount to provision for a particular workload, work with development teams, and that can save money in the long run.

Investors across the two rounds include Entrepreneurs Investment Fund, eValue, EnBW New Ventures, High-Tech Gruenderfonds (HTGF) and Technologiegruenderfonds Sachsen (TGFS). The company is currently participating in the Alchemist Accelerator. The latest round closed in December. The previous one in May 2017.