Facebook cloning Snap to death may be old news, but others are only just following suit. Line, the Japanese messaging app that’s popular in Asia, just became the latest to clone Snap’s ephemeral story concept.

The company announced today that it is adding stories that disappear after 24 hours to its Timeline feature, a social network-like feed that sits in its app, and user profiles. The update is rolling out to users now and the concept is very much identical to Snap, Instagram and others that have embraced time-limited content.

“As posts vanish after 24 hours, there is no need to worry about overposting or having posts remain in the feed,” Line, which is listed in the U.S. and Japan, wrote in an update. “Stories allows friends to discover real-time information on Timeline that is available only for that moment.” 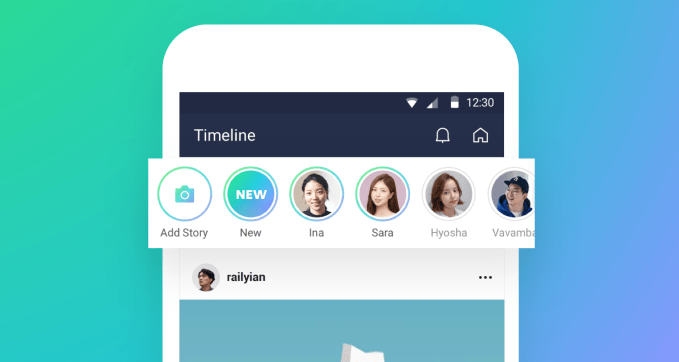 Snap pioneered self-destructed content in its app, and the concept has now become present across most of the most popular internet services in the world.

In particular, Facebook added stories across the board: to its core app, Messenger, Instagram and WhatsApp, the world’s most popular chat app with more than 1.5 billion monthly users. Indeed, Facebook claims that WhatsApp stories are used by 500 million people, while the company has built Instagram into a service that has long had more users than Snap — currently more than 1 billion.

The approach doesn’t always work, though — Facebook is shuttering its most brazen Snap copy, a camera app built around Instagram direct messages.

China’s top chat app WeChat added its own version earlier this year, and while it said in its earnings this week that users upload “hundreds of millions of videos each day” to its social platforms, it didn’t give numbers on its Snap-inspired feature.

Line doesn’t have anything like the reach of Facebook’s constellation of social apps or WeChat, but it is Japan’s dominant messaging platform and is popular in Thailand, Taiwan and Indonesia.

The Japanese company doesn’t give out global user numbers, but it reported 164 million monthly users in its four key markets as of Q1 2019; that’s down 1 million year-on-year. Japan accounts for 80 million of that figure, ahead of Thailand (44 million), Taiwan (21 million) and Indonesia (19 million.)

While user growth has stagnated, Line has been able to extract increased revenue. In addition to a foray into services — in Japan its range covers ride-hailing, food delivery, music streaming and payments — it has increased advertising in the app’s Timeline tab, and that is likely a big reason for the release of stories. The new feature may help Timeline get more eyeballs, while the company could follow the lead of Snap and Instagram to monetize stories by allowing businesses in.

In Line’s case, that could work reasonably well — for advertising — as users can opt to follow business accounts already. It would make sense, then, to let companies push stories to users that opted to follow their account. But that’s a long way in the future, and it will depend on how the new feature is received by users.