Kids need a good education to have the best chance of succeeding in the world, but in distant parts of developing countries there may be neither schools nor teachers. The Global Learning Xprize aims to spur innovation in the tech space to create app-based teaching those kids can do on their own — and a tie means the $10 million grand prize gets split in two.

The winners, Onebillion and Kitkit School, both created tablet apps that resulted in serious gains to literacy rates in the areas they were deployed. Each receives $5 million, in addition to the $1 million they got for being a finalist. Elon Musk and Xprize co-founder Anousheh Ansari were in attendance to congratulate the winners.

Funded by a number of sponsors, including Elon Musk, the prize started way back in 2014. Overseen at first by Matt Keller (previously at the famous but sadly unsuccessful One Laptop Per Child program), and later by Emily Musil Church, the prize asked entrants to create free, open-source software that kids could use to teach themselves basic reading, writing and arithmetic.

Can tech teach kids to teach themselves? XPRIZE, Google, and the UN team up to find out

After soliciting teams and doing some internal winnowing of the herd, a set of five finalists emerged: CCI, Chimple, Kitkit School, Onebillion and Robotutors. They came from a variety of locations and backgrounds, and as mentioned all received a $1 million prize for getting to this stage.

These finalists were then subjected to field testing in Tanzania, where 8,000 Pixel C tablets generously donated by Google for the purpose were distributed to communities where teaching was hardest to come by and literacy rates lowest.

Among the participating kids, only about a quarter attended school, and only one in 10 could read a single world in Swahili. By the end of the 15-month field test, 30% of the kids could read a complete sentence — results were even better among girls.

I asked about the field test process itself. Church, who led the prize project, gave a detailed answer that shows how closely the organization worked with local communities:

The field test was a very unique and complex operation – the field test included nearly 2,700 children and 170 villages in some of the most remote parts of Tanzania over the course of 15 months. XPRIZE worked closely with its partners on the ground to implement this unique 15-month field test – UNESCO, World Food Programme, and the Government of Tanzania. In total that required over 300 staff members in Tanzania from all levels – from the regional educational officials to village mamas — women from each village who have been empowered to ensure the smooth functioning of the test. This was truly a ground-up, community-driven operation. Logistically, this required identifying and sensitizing communities, conducting baseline and endline assessment of all the children prior to tablet distribution, installing solar charging stations in all of these villages for the tablets, and physical data collection and tablet distribution by our heroic Field Assistants on motorbikes (just to name a few of the critical activities).

Once the tablets were in the hands of the children – the general approach was to be very “hands-off” as we wanted to see whether or not the software itself was leading to learning gains. We instead relied on village mamas to create a safe environment in which a child can use the tablet when they chose to. In short – we realize that in order for this work to scale globally – hands-on instruction is hard to do. 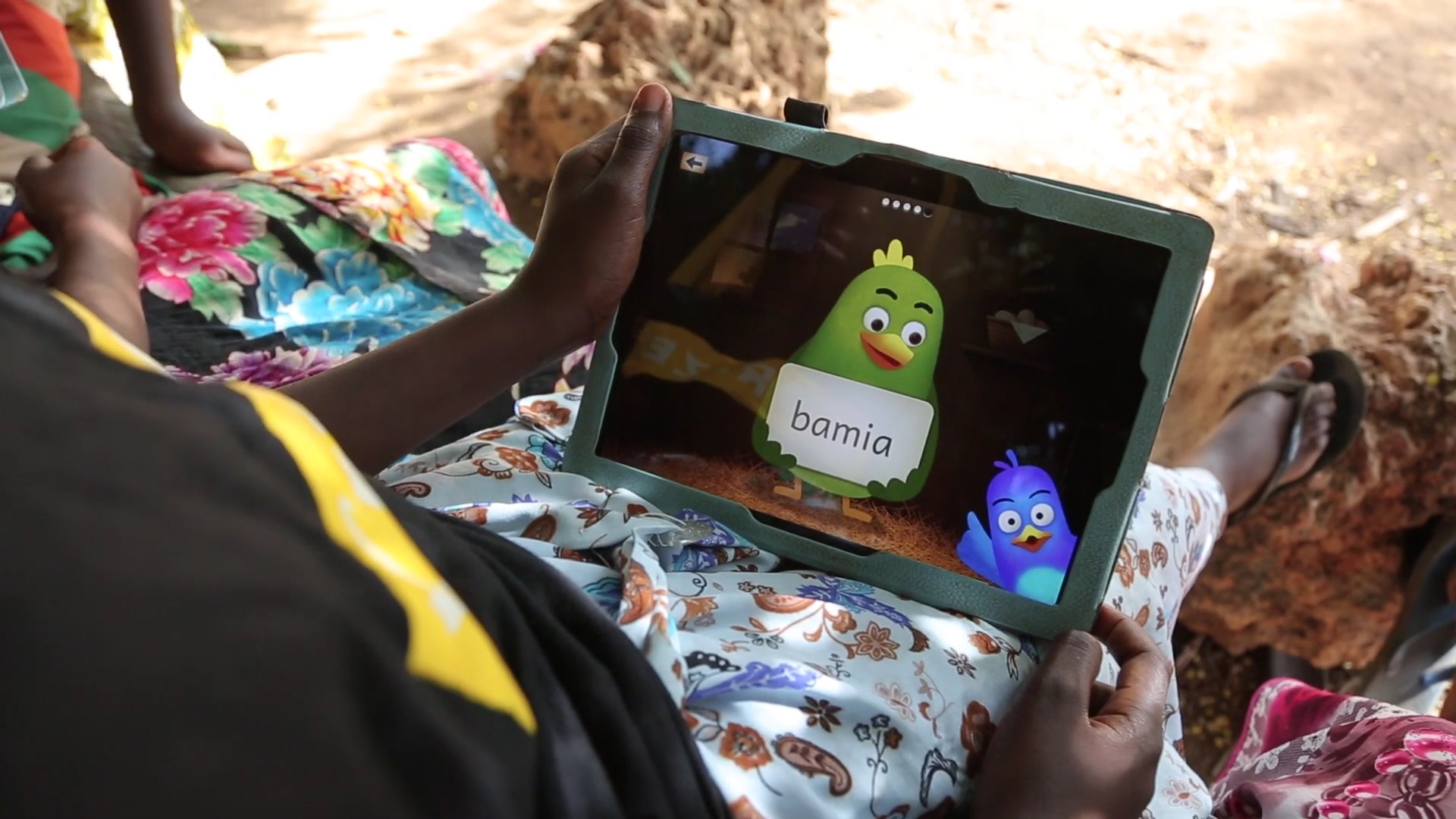 The winning teams had similar approaches: gamify the content and make it approachable for any age or ability level. Rural Tanzania isn’t hurting literacy-wise because of a lack of worksheets. If these kids are going to learn, it needs to be engaging — like anywhere else, they learn best when they don’t realize they’re being taught.

Onebillion’s approach was to create a single but flexible long course that takes kids from absolutely zero reading knowledge to basic competency. “Onecourse is made of thousands of learning units, some could be on reading activities, some could be on numeracy activities — it’s a modular course, it’s built around the child’s day and adapts to their needs,” explained the company’s CTO, Jamie Stuart in a video about the team.

“When the child is not yet at a stage when they can read, the story can be played back to the child a bit like an audio book. When the child starts to be able to decode words we can offer them assistance, and then later on they can attempt to read the story by themselves.”

Kitkit School came from Sooinn Lee and her husband, both game developers (and plenty of others, of course). She points out that games are fundamentally built around the idea of keeping the player engaged. “Sometimes in education software, I see there is software too much focused on what to deliver and what is the curriculum, rather than how a child will feel during this learning experience,” she said in her team video.

“We create gamified learning with a mixture of high-quality graphics, sound, interactions, so a child will feel they’re doing a really fun activity, and they don’t care if they’re learning or not, because it feels so good.”

All the finalists were on the ground in these communities working with the kids, so this wasn’t just a fire and forget situation. And if we’re honest, that may account partially for the gains shown by these kids.

After all, the main issue is a lack of resources, and while the tablets and curricula are a good way to bring learning to the kids, what matters most is that someone is bringing it at all. That said, pre-built fun learning experiences like this that can run on rugged, easily distributed hardware are definitely powerful tools to start with.

As for the communities involved — they won’t be left high and dry now that the testing is over. Church told me that there are plans to make the apps part of Tanzania’s education system:

Our UN partners on the ground (UNESCO and WFP) have worked hand-in-hand with the Government of Tanzania to develop a plan regarding how to continue to use the software (deployed in Tanzania as part of this project), the tablets in the project, and the solar stations installed. This plan will be implemented by the Government of Tanzania in late June in conjunction with UNESCO and WFP. Part of this plan is to get the content in all five of the applications approved to be part of the formal education system in Tanzania, so it can be integrated. We laud the foresight of Tanzania to see the value in tablet-driven learning as a way to reach all children.

And the devices themselves will stay put, or even be replaced. “The staff on the ground will work with the communities to ensure each child as part of this project receives up-to-date software and a new tablet,” Church wrote. “In addition our partners are actively working with communities to teach them how to maintain and continue to use the solar stations in their villages beyond this project.”

Not every needy kid has a rich western organization to drop a state-of-the-art tablet in their hands. But this is just the start of something larger — here’s hoping programs like this one will grow to encompass not just Africa but anywhere, including the U.S., where disadvantaged kids need a hand with the basics.