Twitch Prime, the game streaming service’s version of Amazon Prime, has typically focused on offering subscribers free loot and other game-related perks since its debut a few years ago. Now, that’s changing. Twitch Prime is today rolling out its first-ever non-gaming “loot” — a 30-day subscription to the anime streaming service Crunchyroll Premium.

Crunchyroll is a top destination for watching anime online, with more than 45 million registered users and 2 million paying subscribers who usually pay $7.99 per month for its “Premium” tier. The service’s library includes more than 1,000 series and 30,000 episodes. And the wider Crunchyroll brand includes things like mobile games, events, merchandise and more.

The two companies, Twitch and Crunchyroll, already had a long-term relationship before today. For the past two years, Crunchyroll made the game streaming site the exclusive live streaming home to its annual Anime Awards show, for example, and it operates its own Twitch channel. This past year, Twitch also streamed an exclusive pre-show anime marathon where more than 1.3 million online viewers watched a collective nearly 19 million minutes. The official Twitch stream of the Anime Awards show also reached nearly half a million unique viewers. 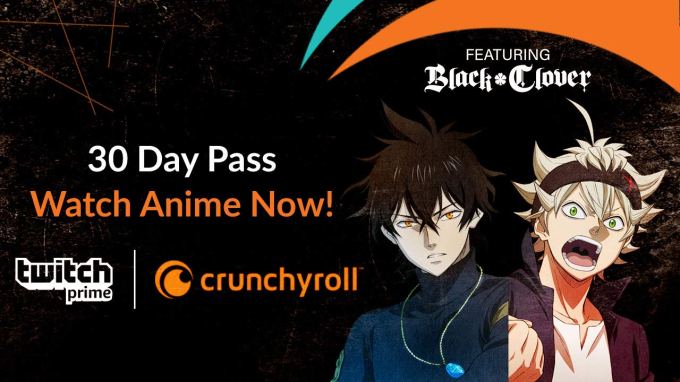 Given the Twitch audience’s clear interest in anime, a partnership that could potentially convert some of those fans to paying subscribers makes sense for Crunchyroll.

Meanwhile, for Twitch, the move serves as a way to test expanding Twitch Prime offers to a new category — free trials of subscriptions. The larger subscription market is booming, with some saying how everything from transportation to entertainment to groceries will eventually become subscription-based. Helping those companies reach Twitch’s younger demographic — and specifically those who are already paying for a subscription with Twitch itself — could help a service boost sign-ups.

While most streaming subscriptions today offer a free trial to interested users, smaller players often still struggle with discovery amid a growing number of new entrants on the market ranging from live TV services to video-on-demand and, soon, to big-name newcomers like Apple TV+ and Disney+, for example.

Twitch and Crunchyroll declined to say what sort of revenue share would take place if Twitch Prime members elect to continue with a paid subscription when the free month wrapped.

“While we constantly focus on delighting Crunchyroll fans, we also feel it’s our responsibility to continue to proliferate the popularity of anime to new audiences,” said Eric Berman, head of partnerships at Crunchyroll, in a statement. “We pride ourselves on working with like-minded, fan-focused partners and are excited to offer all Twitch Prime members a free pass to Crunchyroll right in time for the huge spring anime season,” he added.

The Crunchyroll Premium subscription offered to Twitch Prime members is twice as long as the company’s free trial, and it doesn’t require users to enter a credit card to take advantage of the perk.