Tencent, Asia’s largest tech firm, had a horrific 2018 on account of a country-wide freeze on new game monetization in China, but there’s evidence it has turned the corner.

The company’s new mobile gaming hit, Game for Peace, has yet to kickstart the company’s recovery from a few weakening quarters, but its booming financial technology division has helped neutralize the brunt to some degree.

The Chinese social media and gaming titan ended the first quarter of 2019 with its slowest revenue growth since going public, to $12.69 billion, a 16% increase year-over-year. On the other side, net profit came in at a record $4 billion, beating analyst estimates in the process. 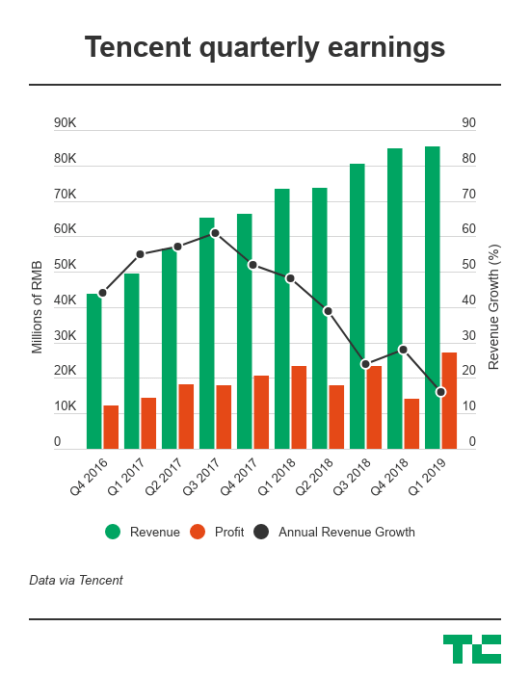 Though most famous for WeChat, video games have fueled Tencent’s earnings and stock prices for many years. The lucrative segment took a hit during a prolonged licensing freeze last year that prevented Tencent from monetizing a few blockbuster titles like PUBG, and the impact was still felt in the latest quarter.

Online games revenue for Q1 dropped to 28.51 billion yuan ($4.1 billion), compared to 28.78 billion yuan a year before. Still, it is a testament to the global appeal of PUBG and Fortnite that the revenue drop wasn’t precipitous despite the issues in China.

The sluggish period may end soon as Tencent recently secured the official green light to start charging for its PUGB substitute Game for Peace, a less violent version than its predecessor. The new game grossed $14 million within the first three days of release, beating the $4 million Fortnite — the widely-heralded global smash hit — pocketed in the same duration, according to data from Sensor Tower.

That said, executives played down immediate spending — game revenue doesn’t hit Tencent’s P&L right away — because, initially at least, the focus is on attracting and retaining gamers.

“We want to attract the gamers, we want to retain the gamers and, over time, work on the monetization,” Tencent COO Mark Ren said on a call with analysts.

In the more immediate period, Tencent said it is introducing “season passes” — using the same monetization technique as PUBG and Fortnite, which charge $10-$15 for a set of new features — to popular games Cross Fire Mobile, Honour of Kings and QQ Speed Mobile, which is likely to boost monetization in China.

“We generally see players who buy the season pass engage with the game more,” CSO James Mitchell said. “Game passes boost paying [gamer] ratios because some don’t pay for in-game items but will pay for a season pass and associated activities.”

“The cannibalization impact is either relatively small or zero, so net-net the season passes can be accretive to revenue,” he added.

Fintech and enterprise-facing services made up Tencent’s second-largest revenue bucket, with 21.79 billion yuan ($3.16 billion), a 44% growth year-over-year. In recent quarters, the firm began to single out its earnings for its booming fintech unit that contains its popular payments service WeChat Pay.

That’s thanks to increased ad revenues from Weixin. All told, WeChat and its Chinese version Weixin crossed the 1.1 billion monthly active user benchmark. Its 20-year-old QQ, a legacy chatting app from the Chinese PC era, continued to grow and reached 823 million MAUs.