Measured is giving advertisers a new way to determine whether their ads are actually working.

Many of those advertisers currently rely on multi-touch attribution, an approach designed to measure how each channel and each ad contributed to a purchase decision. In fact, that’s what Measured CEO Trevor Testwuide offered at his last startup, Conversion Logic.

But Testwuide (who co-founded Measured with CTO Madan Bharadwaj) said this approach has serious limitations, particularly when it comes to measuring channels like Facebook, as well as offline channels like direct mail.

“I would say that multi-touch attribution, for nine out of the 10 brands that we see, is a fool’s errand because it measures such a small percentage of media,” he said.

Instead, Measured employs what it calls “steady-state test-and-control experimentation.” Testwuide described it as a sophisticated form of A/B testing that measures whether an ad will actually provide an incremental improvement in consumer behavior. He said this kind of testing is relatively straightforward when it comes to analyzing existing customers, but is “really, really hard” for finding new customers. 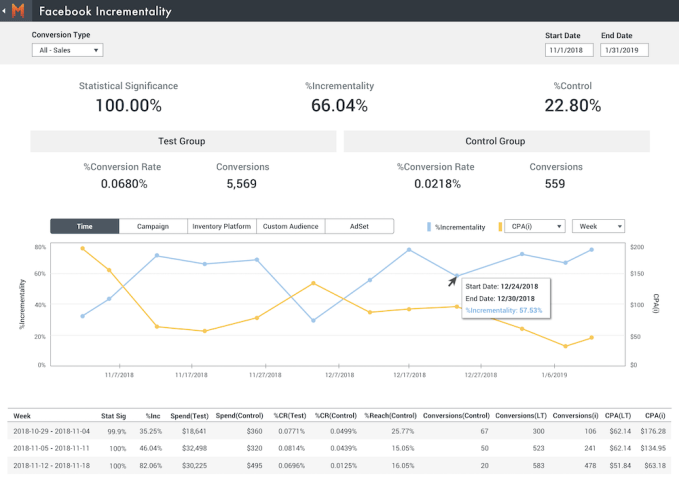 “How we deploy and manage a clean control for prospecting experiments without any bias — that’s where a lot of our breakthrough technology has been,” he said.

And while Measured is only coming out of stealth now, Testwuide said the company was founded back in February 2017 and is already working with 15 brands, including FabFitFun, Johnny Was, Hint, AB InBev, J.Jill, AARP and Soft Surroundings. In a statement, Johnny Was CEO Rob Trauber said the technology allows his team to “have a laser focus on the incremental contribution of paid media, providing us the data to make smarter investment decisions.”

Testwuide added that he and Bharadwaj initially funded the company with their own money, and that it’s now profitable.

“We have no plans to raise outside capital,” he said. “I won’t rule it out, raising some growth capital, but we’re a well-funded, organically growing business.”