Voi Technology, the “micromobility” startup that operates an e-scooter service on the streets of a growing number of European cities, has unveiled a range of new scooters and a first e-bike more suited to rentals.

The company is also revealing plans to expand to another 150 cities and towns, having ratcheted up 2 million rides in eight months since launching. Voi currently operates in 18 cities in nine European countries — including Stockholm, Madrid, Copenhagen, Paris, Lyon and Lisbon — and will open up in Germany, Belgium, Poland and Italy this summer.

In a call, Voi CEO and co-founder Fredrik Hjelm told me the new hardware rollouts are part of the Swedish company’s plans to become a broader micromobility play with a range of travel options that meet the demands of people living in urban areas and the sustainability concerns of city and town authorities. The new e-scooters have been designed and engineered in-house using data collected (and other learnings) from riders during Voi’s relatively short lifespan.

Voi’s main new model, dubbed “Voiager 2,” is said to be designed for maximum durability as well as future recycling (when it falls apart or is superseded). The body is cast in one single piece of 5mm high-grade aluminium, coupled with performance enhancements thanks to a custom electric powertrain and 10″ wheels. There’s also a kickstand to prevent the e-scooter from falling over when parked (a common sight in some cities) and a three-wheel version particularly suitable for slippery conditions.

The Voiager 2’s display features “Advanced Rider Assistance System (ARAS) functions,” such as navigation support, alerts and notifications. The idea, explained Hjelm, is to avoid riders having to juggle looking at their mobile phone or to continuously stop to navigate. The Internet of Things (IoT) Telematics unit is integrated into the body of the scooter.

Hjelm says the Voiager 2 is Voi’s first scooter based on the Voi modular scooter architecture (VOI MSA), which allows for easy service, repair and upgrades. There’s also a swappable battery to reduce scooter downtime, as well as to reduce the environmental impact and cost of charging scooters.

Overall, the design is not just intended to improve the e-scooter experience for consumers and city authorities but should go some way to addressing concerns around the questionable unit economics of micromobility services.

In a bid to launch at speed and test the market, companies have used off-the-shelf consumer-grade e-scooters that aren’t durable enough to withstand the battering they receive through shared commercial use and being left outside in varied weather conditions. They’re also not designed with rental logistics in mind, and even something as simple as a hot swappable battery can reduce the cost of running an e-scooter service, as more scooters remain in motion, potentially increasing revenue per scooter. There’s also a reduction in the cost of collecting dead batteries for re-charging as they are de-coupled from the scooter itself. 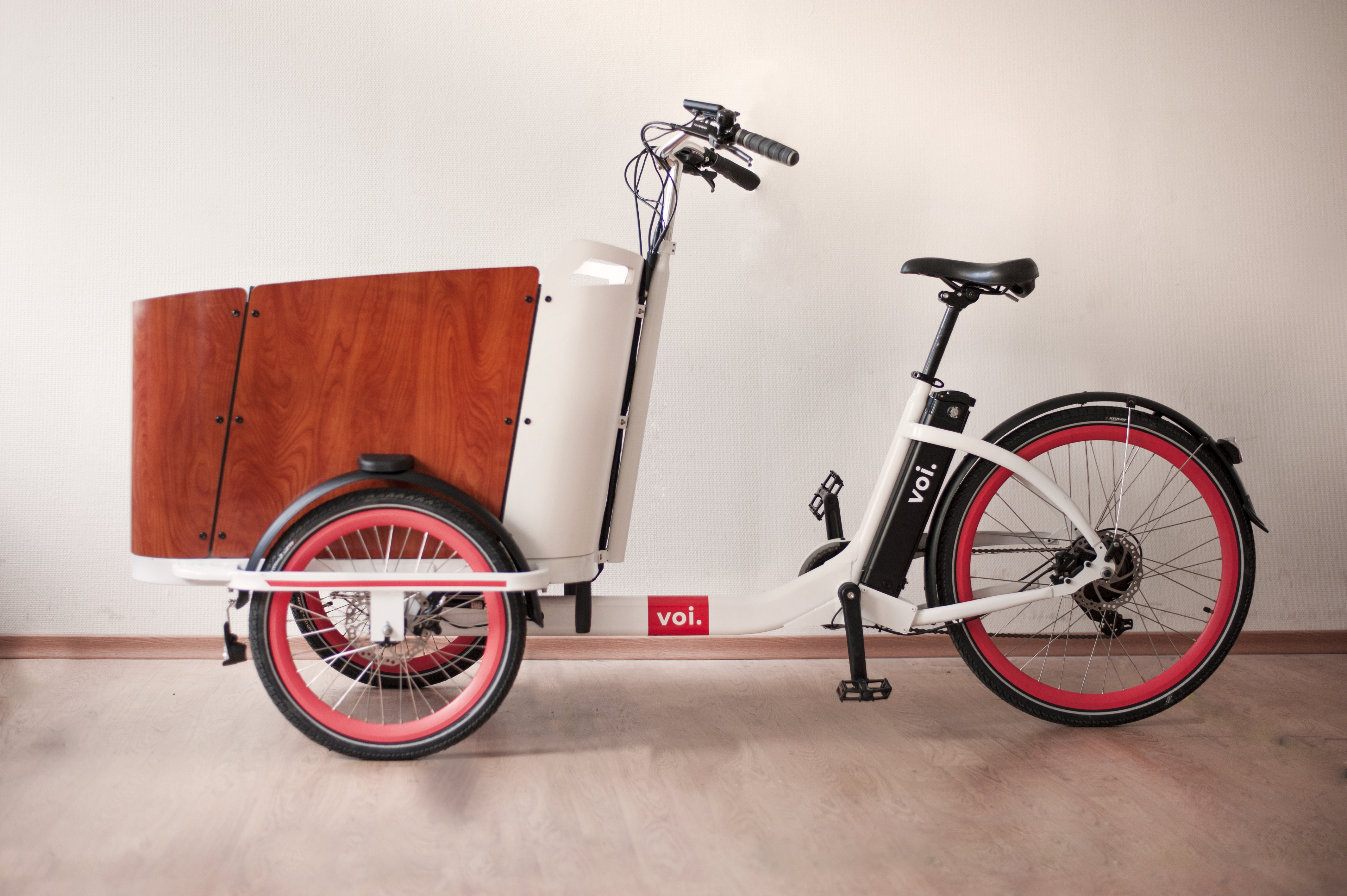 A second model, the new “Voiager 1” has been designed for the German market. This month the German government will greenlight e-scooters for use on its roads. Hjelm thinks Germany will quickly become one of the world’s biggest e-scooter markets and its new rugged scooter features brakes and indicator lights that meet strict German regulations, which the Voi CEO believes are likely to be adopted elsewhere.

Voi is also unveiling the Voi Bike and Voi Cargo. The former is an e-bike that has been adapted for sharing and meets European e-bike regulations. It can travel at 25km/h fully assisted and is suitable for longer distances than e-scooters. Voi Cargo is a three-wheel electric cargo bike that caters specifically to riders who have to carry bulky loads, such as groceries or children. The bike has a large box on the front, which features three-point seatbelts.

Meanwhile, Voi isn’t the only European e-scooter startup developing its own hardware. Flash — the stealthy mobility startup from Delivery Hero and Team Europe founder Lukasz Gadowski — has talked up its own hardware product plans, while Berlin’s Wind Mobility is also developing a proprietary model of electric scooters specifically designed for the sharing market.

Other competitors in Europe include Tier and Taxify’s Bolt. Silicon Valley’s Bird and Lime also operate in Europe.